UAW officials say both sides are close to a tentative agreement. 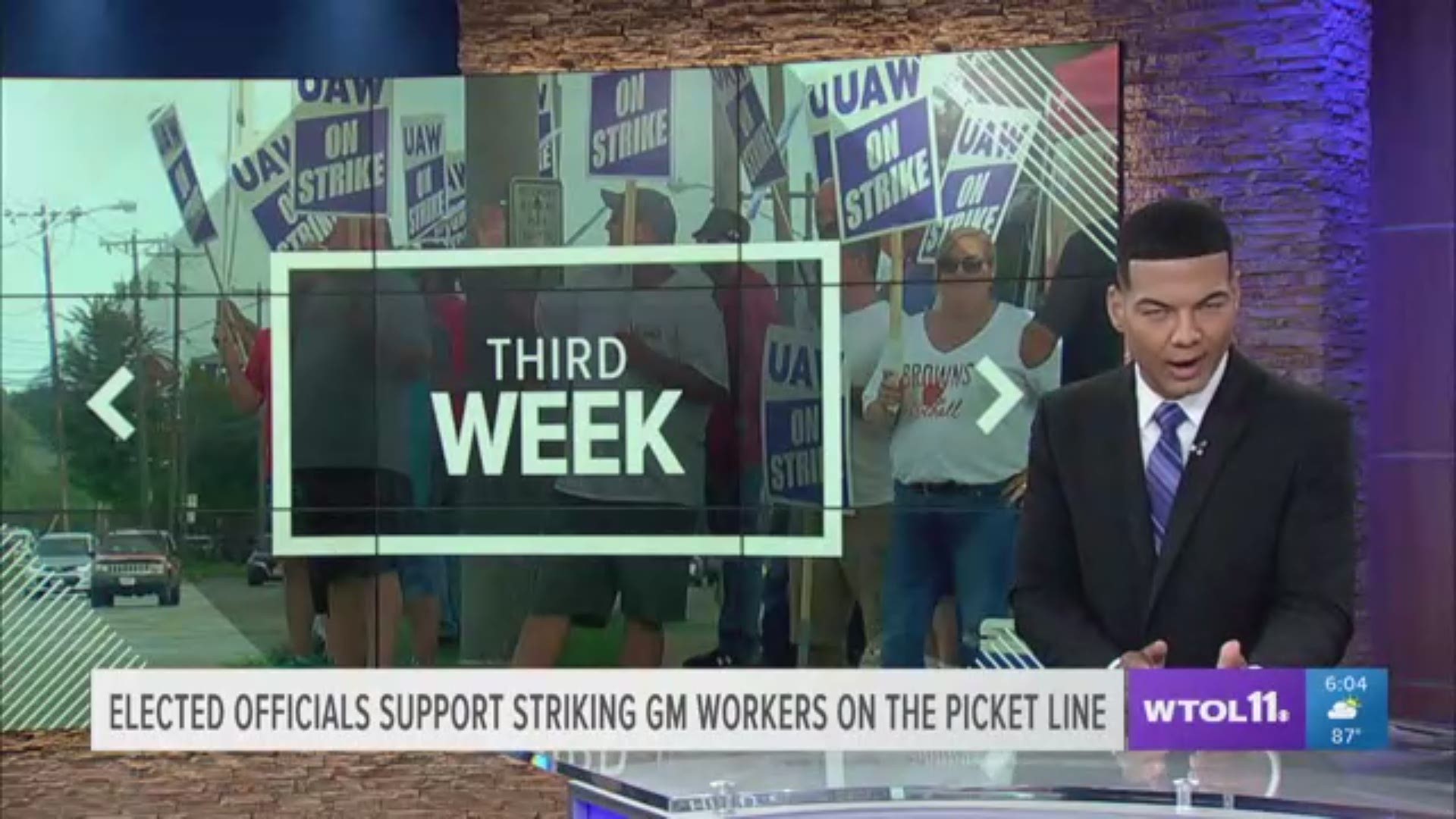 Brown's message was that GM needs to treat all of their workers equally and give them a contract that reflects their hard work. He pointed out that workers have stuck with the company in the past when times were tough and it’s time they do the same.

While negotiations continue to happen up in Detroit, Brown said he is pushing GM to get all of these workers back to work. He weighed in on whether officials are telling him how negotiations are going so far.

“They won’t tell us much, they say 'We're in bargaining, we can’t really talk, or we don’t really know what we’re going to do in Lordstown.' It’s just frustrating, I always remind them that the taxpayers and the workers at the company are the reason they’re in business," Brown said.

Brown has been tweeting about the strike since it started two weeks ago.

Toledo Mayor Wade Kapszukiewicz also weighed in on the strike Monday and said he supports General Motors workers. Since this is the second major strike in Toledo this year, he spoke on why he believes workers are standing up.

“It’s really a reflection of where America is right now. You know, you have the middle class that feels they’re being pulled in every direction and they are having a hard time making ends meet," he said. "Right now, it’s playing out on Alexis Road in Toledo, Ohio. But there are hundreds of other places in our country I suspect in the next months and years, this same thing will play out.”

Some progress has been made as GM told UAW members they will get company-paid health insurance after saying the coverage will be cut off.

The biggest hurdle yet to overcome in negotiations is the status of temporary and part-time workers.

The UAW says they need to be treated like full-time employees.

Progress is being made toward ending the strike, as UAW officials say both sides are close to a tentative agreement.

A lot of people on the picket line say they are hopeful the strike ends soon.

GM and the union are negotiating at a time of troubling uncertainty for the U.S. auto industry, as its starting to face major changes.

Negotiations broke down Sept. 15 between GM and the UAW. These negotiations began back in July.

Jeep workers showed solidarity with their fellow union workers on Thursday by joining them on the picket line, even driving by the strike honking their horns in support. 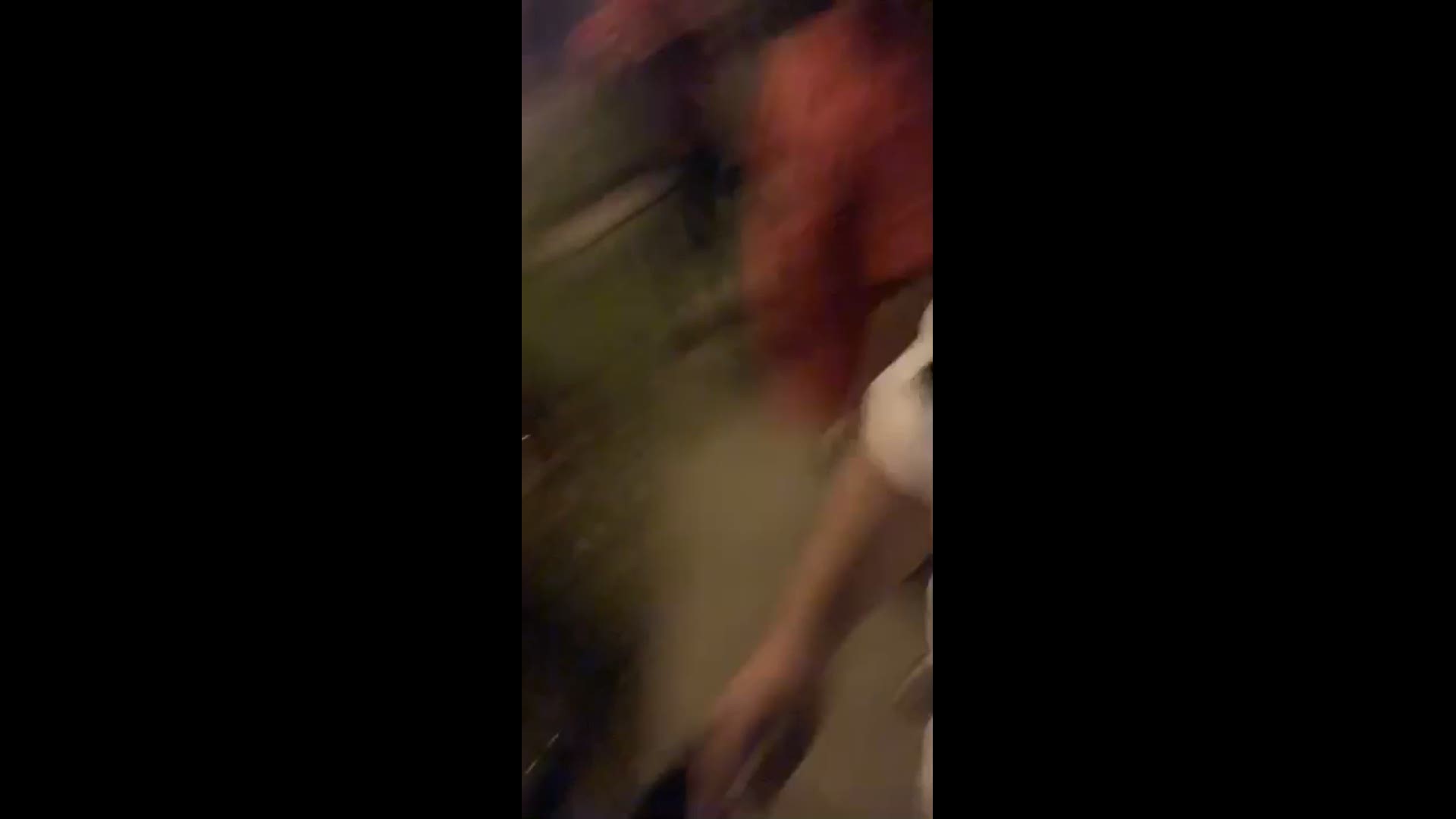 "The support from the community, Local 12 especially, and the Toledo community has been overwhelming," said UAW Local 14 president Dennis Earl. "It helps lift up the spirits and everybody knows that everybody's behind them, so they're in it for the long haul."

Jeep workers say the contract that is decided upon by GM and the UAW will lay the foundation for what their contract would look like in the future.

"We share the same concerns, and we could be out here real soon, too," said Phil Reiter, who works at Fiat Chrysler. "We're out here showing our support for them.

Reiter said that like GM workers, Jeep workers are also concerned for their part-time workers.

"In many cases, we have part-timers working full-time hours at the Jeep plant with lower benefits and lower pay and no defined path that they'll get to full-time," Reiter said.

The walkout brought more than 50 factories and parts warehouses to a standstill. Some estimates have suggested that GM is losing as much as $50 to $90 million per day. The strike has also caused GM to close down two Canadian factories and has also led to layoffs at some of GM's suppliers.

And those who buy or own a GM vehicle could feel the impacts of the strike, too.

According to the Associated Press, the strike could bring GM's U.S. vehicle and parts production to a halt and would likely stop GM from making vehicles in Canada and Mexico, resulting in fewer vehicles on dealer lots and no way to build specially ordered cars and trucks.

Teamsters are also refusing to transport General Motors vehicles in solidarity with the UAW.

Dealers say at this point they are not worried, but if the strike were to continue for a few more weeks, then there could be some issues.

They say GM stockpiled and beefed up production right before the contract expired, but this will only last for so long.

Part replacements could also be an issue for GM vehicle owners as it could take longer for parts to come in.

But in the grand scheme of things, the UAW believes the strike will be worth it.

"We've got to stay strong, we're doing this for the younger people," said Earl. "1970s, General Motors was the last big national strike, 67 days. I've been here for 35 years, and I've had a great life on what those people have done for us. It's time for us to do it for the younger people."

While roughly 49,000 workers are expected to strike nationwide, there are roughly 2,000 who are impacted between the Toledo and Defiance plants.

Workers hit the picket lines by the 11:59 p.m. deadline on Sept. 15, and have been picketing on a rotation since.

Other local autoworkers from other plants are also standing on the picket line with GM workers, some from as far as Sandusky. Strikers said they will continue to push for better health care and equal pay for younger workers.

“For me, it’s not fair for somebody to be working beside me to be making less money than me and doing the same job,” Toledo GM worker, Larry Logan, said.

RELATED: GM walkout brings factories and warehouses to a standstill

General Motors' initial offer called for workers to pay 15% of health care expenses, well below the national average of 28% but fair higher than the 3% to 4% workers currently pay, according to Automotive News.

The union drew back from that proposal, with GM then offering to keep members' obligations the way they were. 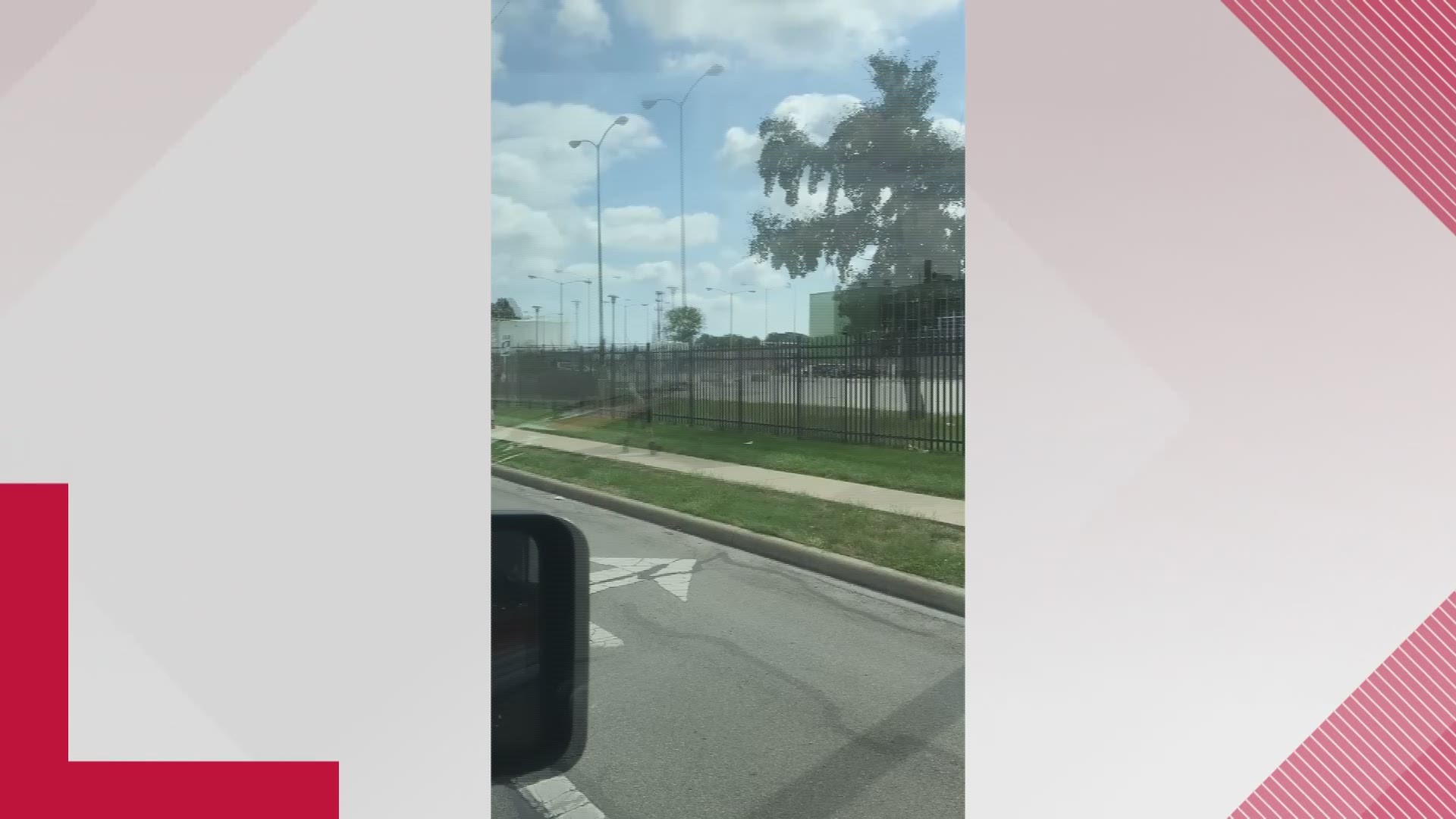 According to Auto News, one of the top things on the UAW's list was gaining product investments in the four U.S. plants GM planned to stop production at, including the Lordstown plant in Ohio.

The Associated Press reported that a person briefed on the bargaining said that General Motors offered the union a deal to make new products at the factories in Lordstown and Detroit.

That person said General Motors representatives offered to build a new all-electric pickup truck in Detroit. The factory in Lordstown, which already stopped making cars, would become a battery-manufacturing plant and could eventually build electric vehicles for a company called Workhorse.

UAW officials, who wish not to be identified, said that workers are demanding job security and protection for younger workers, especially as technology progresses.

Other GM workers said they want some money back after giving up pay raises to help GM get through bankruptcy, according to CBS News.

"If they are lucky enough to get hired into General Motors, it takes them eight years to get the full wage and that is unacceptable," Earl said. "We are picketing for the dignity of the younger workers. General Motors, since the bankruptcy, has been using long-term temps. Some people are temps for two or three years or even longer, and they have a right to be hired. They need to be hired, they need security. We need to protect these younger workers."

He also said that GM needs to maintain more jobs in the United States.

President of UAW Local 14 Dennis Earl said on Sept. 16 that the union workers will strike until they get a fair and equitable deal, but stressed that the strike is a last resort.

"We gave up too much to bankruptcy. Since the bankruptcy, [GM] has seen record profits; we need to share in those profits," Earl said. "The people are ready to do this, but nobody wants to do this. But we also know that unless we do this, unless we stand our ground, General Motors will continue to run over their workers."

There was negotiation meeting on the morning of Sept. 16 in Detroit between international UAW leaders and GM officials. Members of Local 14 said that they were not expecting major progress until their president, Dennis Earl, is called back to Detroit. 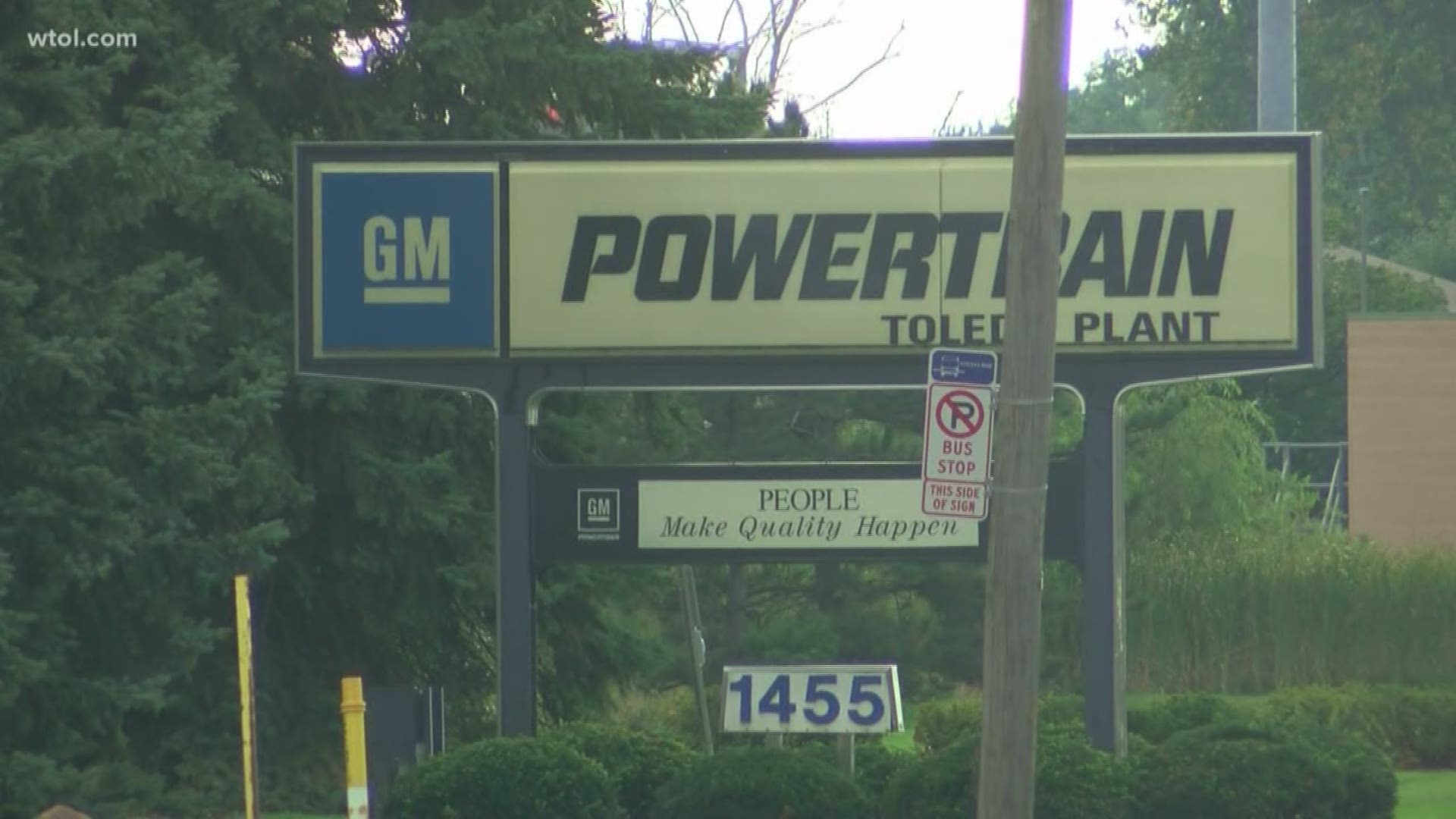 Specifically in Toledo, there are 1,550 unionized GM employees. They already had instructions and strike assignments for the first day of picketing given to them by the Local 14 on Sept. 15.

"Right now, we're asking our members to run two six-hour shifts a week, and so we're running four six-hour shifts a day. They will be picketing as they work their respective shifts in the plant, too," Earl said.

“Got off at 7:30 this morning, got home and got a little rest, and I called over to the hall to ask if they needed help and they said they needed help assembling the picket signs,” GM Quality Operator Jamele Walker said. 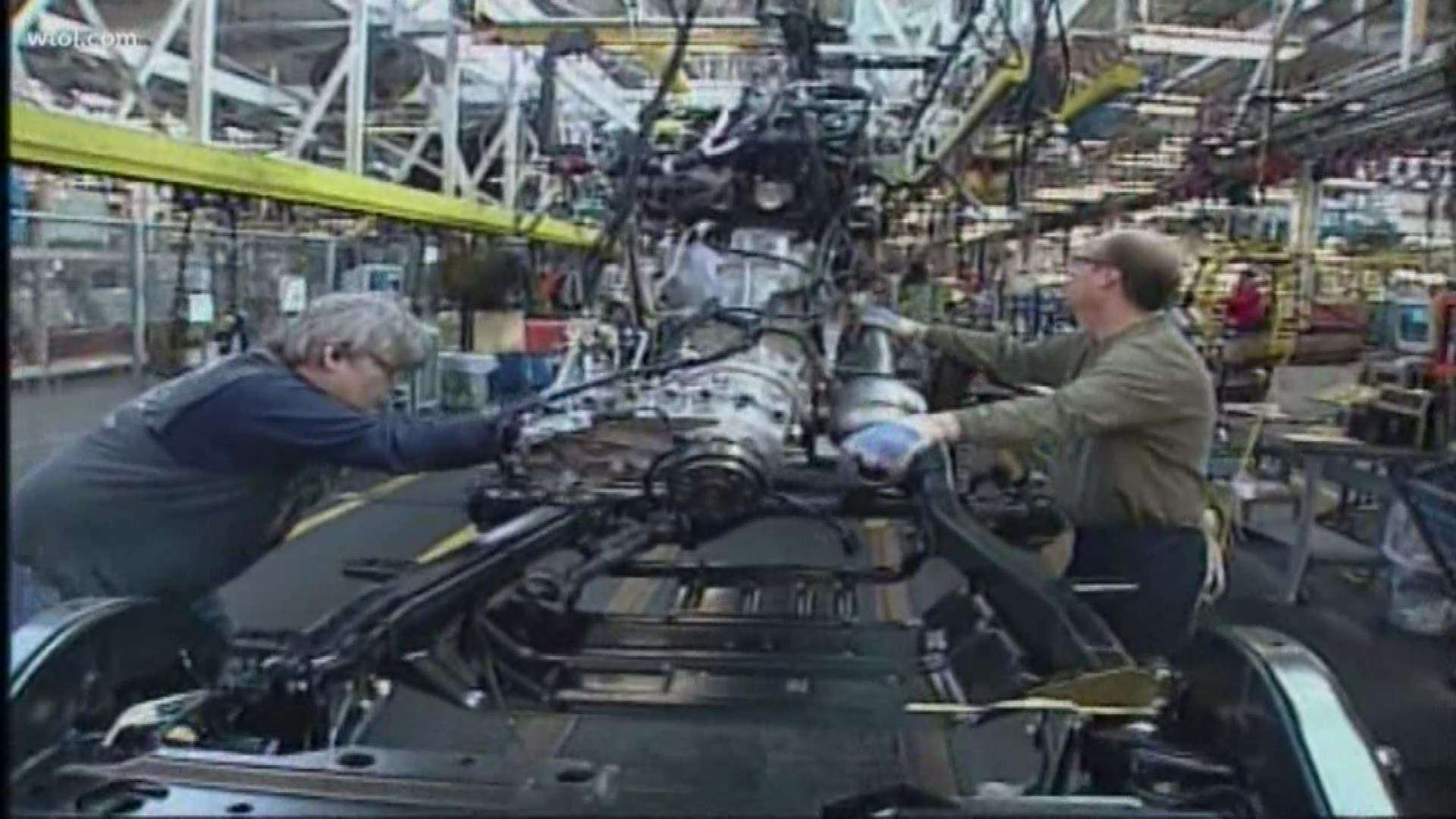 Earl said GM officials are "not willing to recognize the hard work the membership’s been doing and they’re not willing to give an inch. They want to keep all those profits they’ve made since bankruptcy and the American people have bailed them out. They want to keep them all for themselves, they don’t want to share. It’s time that they share with the workers. We need to bring up all the American workers.”

RELATED: Union votes to strike at General Motors' US plants

U.S. Congresswoman Marcy Kaptur (OH-09), responded to the strike on Sept. 16. She released this statement:

“As the daughter of a UAW organizer, I know firsthand how important, and often difficult, these contract negotiations can be for our workers and their families. The contract sets out everything from healthcare benefits to pensions and hourly pay. For many of our autoworkers, the stakes couldn’t be higher. As corporate headquarters strategize on modern investments to maintain industry dominance and relevance, such as in electric and self-driving vehicles, they must also consider the importance of investing in their American workers.”

“All workers have the right to stand up for fairer compensation, better working conditions, and increased investments for plants in their local communities, including communities like Lordstown who have been hurt by GM’s recent restructuring. I urge GM and UAW to continue working toward a solution that honors the Dignity of Work and that helps Ohio autoworkers, communities and families who all help drive the success of the auto industry in Ohio and across the country." 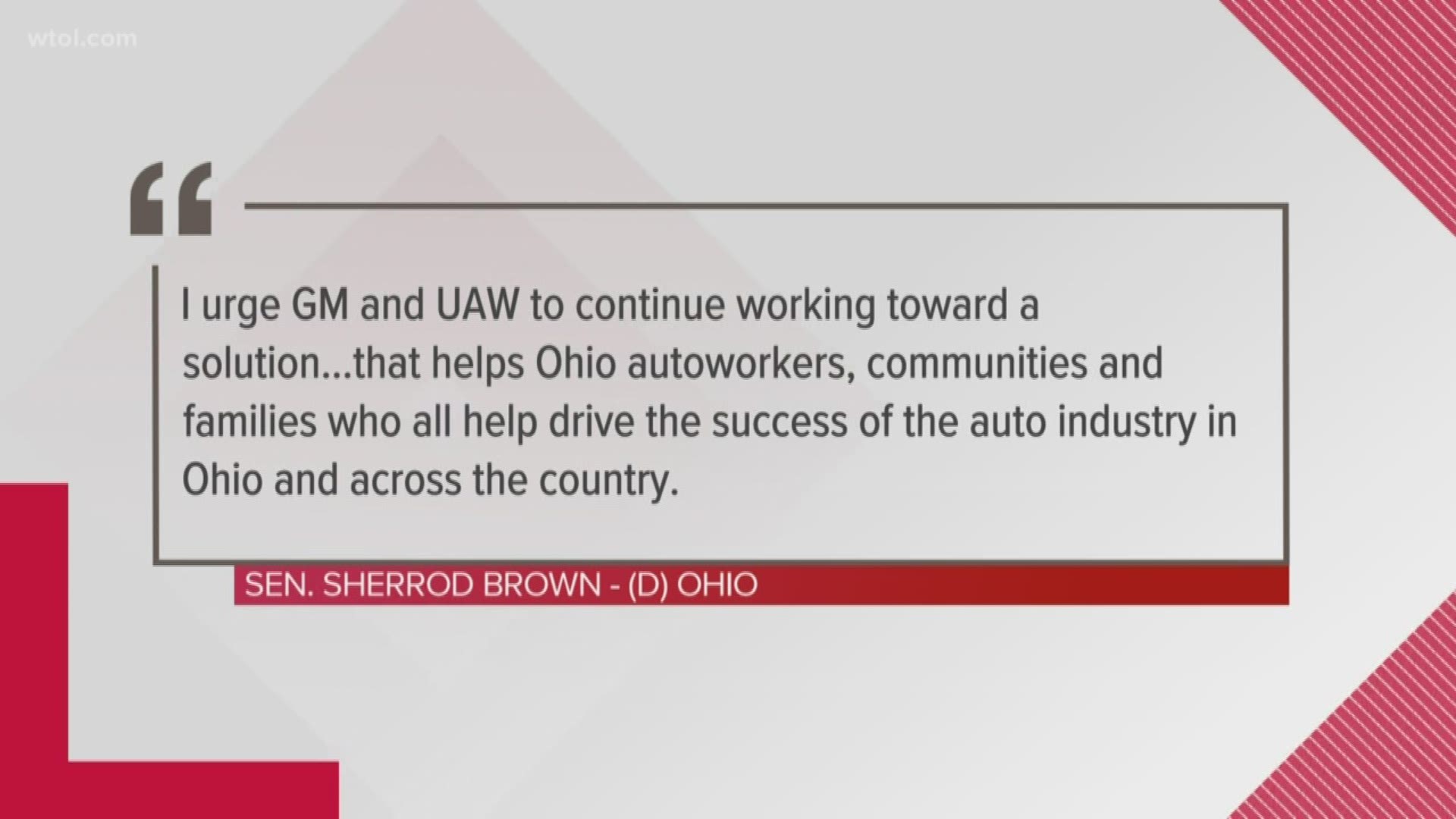 The Lucas County Democrats tweeted they support the union workers "in their fight with GM."

The last strike with General Motor employees lasted for 67 days in 1970.

In the last five years, there have been three major labor strikes in Toledo.

The longest strike in the five-year time period was the BP oil refinery strike in 2015, when workers spent 112 days on strike.

And the longest strike ever recorded in Toledo history was the AP Parts strike in 1984, when 6,000 workers stood their ground for 285 days protesting company cuts, demanding better benefits and better pay. 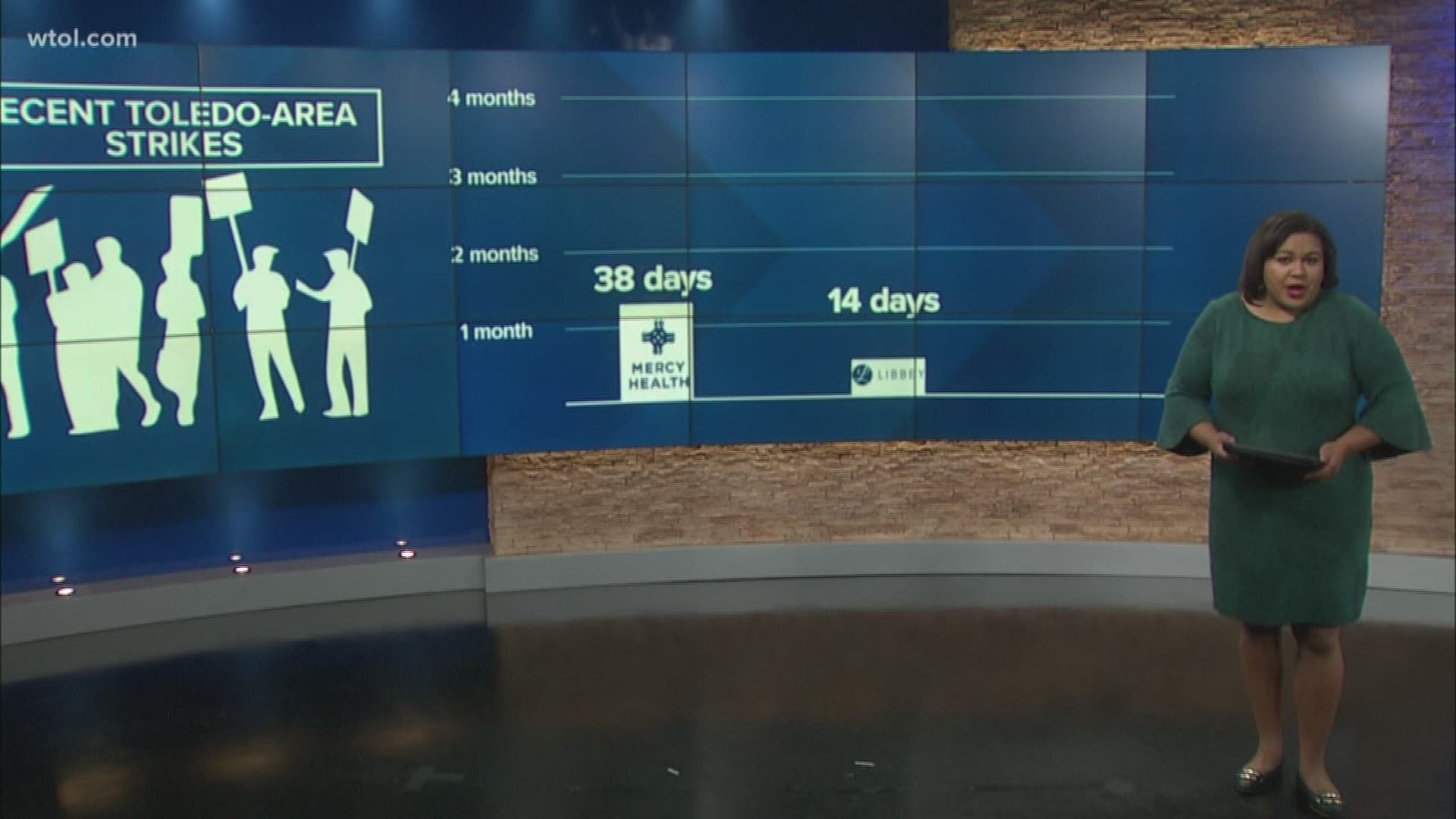