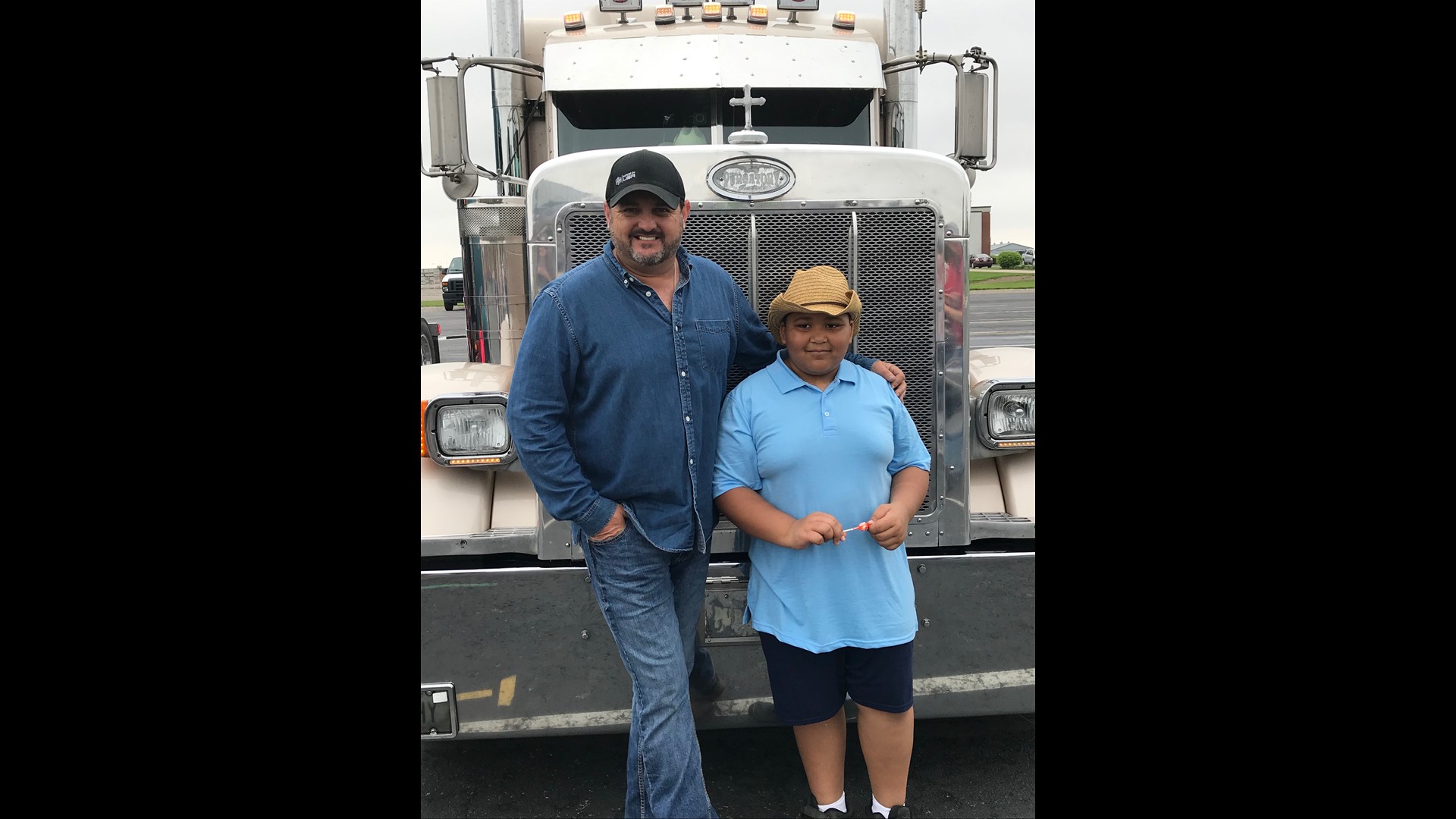 He also has a little bit of trouble staying focused in school.

"Joey's very fun to be around, he's very energetic," said teacher Haley Moser. "He does do his work very well a lot of times, but when we're doing stuff for a long time he kind of tends to get more off track and walk around the room.

"He's one of those kids that 20 things are going through his mind at one time," agrees Joey's dad Chris Coppes. "So to get him to focus, you have to do something."

Instead of getting frustrated, Joey's teachers worked with him to figure out how they could help Joey better concentrate in the classroom.

With Joey's help, they determined he stays focused when he's listening to music.

"He loves anything with music," said Moser.

"When he's listening to his music, he stays focused," Chris said.

Particularly when the music is sung by country singer Tony Justice.

"Joey is a big fan," said Lucy of Justice, saying she and her husband hear a lot of Justice's music at home, even when Joey isn't doing homework. "That's his hero."

Jason Stein, teacher's aide at Tinora Elementary School, says that they first played music in the classroom for Joey last year to see what would happen.

"It was kind of funny because he was working but dancing around his desk," said Stein with a laugh. "The kids the other day were all singing [Justice's] 'Brothers of the Highway' song, so we've heard it quite a few times at this point.

"Brothers of the Highway" is one of Joey's favorite Tony Justice songs. Now, Moser says they automatically play Tony Justice for Joey because they know he likes it.

Lucy said Joey was introduced to Tony Justice by starting to watch semi truck videos on YouTube. Not only does Justice record country music, he is also a full-time truck driver. Joey's dad is also a truck driver, which is where his love for trucks began.

"He likes anything with Tony Justice, or trucks in general," Moser said.

Surprise of his life

Joey even wanted to do his biography project on Justice, which inadvertently got the ball rolling for the surprise of his life.

Stein was helping Joey do research for his project and decided to reach out to Justice. Joey's parents and teachers figured Justice might sent Joey a CD or picture to encourage him to keep up the good work.

"I wasn't looking for anything in particular," said Stein. "I wasn't even sure what would happen."

But Justice said when he read Stein's message, he knew he had to do much more than that.

"My wife was reading me this email and we looked at each other like, 'we gotta go up here to Tinora Elementary in Defiance, Ohio, and meet Joey," said Justice, who resides in Tennessee.

Justice said Joey reminded him a lot of himself at that age because he was always daydreaming in school, too.

"You don't really know what this could do to a child's life," Justice said. "So many kids slip through the cracks of society so fast and you wonder how this might recourse his life and give him confidence in the things he does."

So Justice wanted to do something really special for Joey.

"I posted the email on Facebook and so many of the folks in the trucking industry embraced the post and it sort of went viral," Justice said. "Everybody said, 'We want to come up there' and 'What can we do?' So we got ahold of the principal here and started putting a little something together."

That "little something" grew to be bigger and better than anyone could have imagined.

Not only did Justice come up to Defiance to meet Joey, he brought his own semi truck and recruited local drivers to bring their trucks over to the elementary school so Joey and his classmates could enjoy them.

Truckers help out the school

And on top of that, generous truckers and people from all over the country sent donations of money and school supplies to Tinora Elementary after they heard Joey's story.

"They raised over $3,000 for Tinora Elementary," said Principal Nicole Wells. "So it's great that everybody gives back to such an awesome community. We're more than blessed for all the donations we received."

Tony Justice let the kids check out all the trucks that came to the elementary school, then treated the kids to their own little concert of some of his music.

When his mom asked which truck was his favorite, Joey replied, "all of them."

Joey said he felt very surprised that Tony Justice came to see him.

"I get to ride in his truck!" Joey exclaimed.

Justice said the look on Joey's face when he came out to see his surprise was priceless.

"I think the first 20 minutes he didn't quite smiling," said Justice, with a smile of his own. "I was like, 'Your face is going to stick like that if you don't quit smiling.' It was awesome, it was emotional, and to see kids still excited about big trucks like I was when I was little is awesome."

Everyone who knows and loves Joey was so happy that Justice was able to make the trip to Ohio to surprise Joey.

"It's pretty humbling. I responded back to the email as 'Humbled Artist.' I don't know if you can explain that feeling, when something you do touches someones life like that, it's one of the coolest compliments you could ever have," Justice said.

Stein also credits Joey's great teachers and Principal Wells for making the surprise happen and for caring so much for their students.

The day ended on a perfect note (or, rather, truck horn) when a convoy of about 20 trucks passed by the elementary school, with Joey leading the way in Justice's truck.