Jordan Hardgrow was nearly killed when he was stabbed multiple times earlier this month. 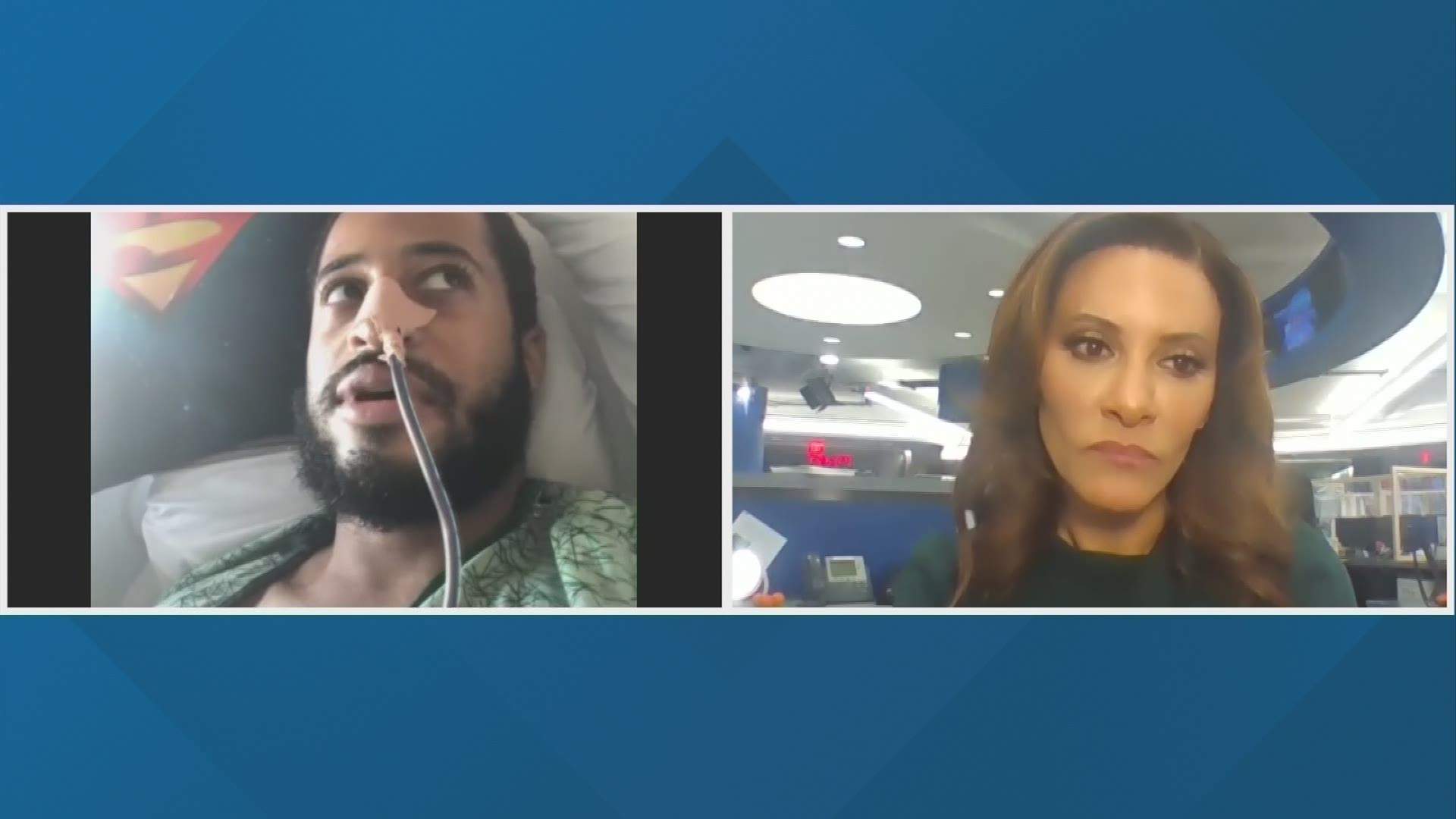 COLUMBUS, Ohio — Jordan Hardgrow. 29, isn’t just lucky. The fact that he’s alive right now is nothing short of a miracle.

Jordan moved from Columbus to San Diego, California about five years ago.  He’s a personal trainer and life was good, until the early morning hours of Jan. 16.

“When I got there, it was just a relief that he’s with us, he’s alive,” said Jordan’s mother Michele Hardgrow. “He survived this.”

She and Jordan’s father first thought their son was missing after a roommate called them saying he never returned home after a night out and wasn’t answering his phone. They booked the first flight to San Diego.

But what they thought was a missing person case turned into an attempted murder case when Jordan was located in the ICU of a hospital.

Witnesses say 20-year-old Pierce Tostado followed Jordan that night.  He walked up behind Jordan and started verbally harassing him.  When Jordan turned around, the two men got into a fistfight and Tostado allegedly pulled out a knife.

“The defendant stabbed the victim approximately five times, causing him to fall to the ground,” said San Diego Deputy District Attorney Hailey Williams. “As the victim lay unarmed and helpless on the ground, the defendant squatted next to him and continued stabbing him in the chest over and over again.”

Hailey goes on to say that a witness attempted to intervene and pull Tostado away from Jordan, but he returned and repeatedly stabbed Jordan more than 20 times.

Jordan was rushed to the hospital in critical condition.  He suffered life-threatening stab wounds to his body.  He had been stabbed twice in the heart, four times in his left lung, two in his right lung and many more in his abdomen.

“I don’t even think you could sit down and really walk through and explain how somebody survives 20 stab wounds,” Jordan told 10TV.  “I think my heart stopped two different times, I mean, how do you explain that?”

There really is no way to explain that, other than a miracle.

His parents say Jordan has an army of support and love from friends and family both in Columbus and in San Diego.  They believe God answered their prayers and guided the doctor who literally held their son’s life in his hands.

“There was a time when Jordan’s heart did stop for almost ten minutes, but the doctor told me he was able to massage the heart and they did have to give him a shot,” says Michele.

Pierce Tostado was arrested shortly after the attack. Tostado appeared in court for the first time on Wednesday. He pleaded not guilty to charges of attempted murder and assault with a deadly weapon. Bail was set at $1 million and his next court date is scheduled for March 9.

Jordan says he doesn’t know Tostado and had never met him before. No motive for the attack has been revealed. So, he has no idea why this happened to him.

“I’d much rather turn my energy toward the people who support and love me rather than somebody who was looking for a fight,” says Jordan.

His parents remain in San Diego.  They say they’ll be there as long as necessary.

“We’ve been in a whirlpool of emotion,” says Troy Hardgrow, Jordan’s dad. “We really haven’t had a lot of time to be angry or to focus on what went down. We’re 100% focused on getting him back up on his feet.”