Colossal Cupcakes is also opening a location at Great Northern Mall next month. 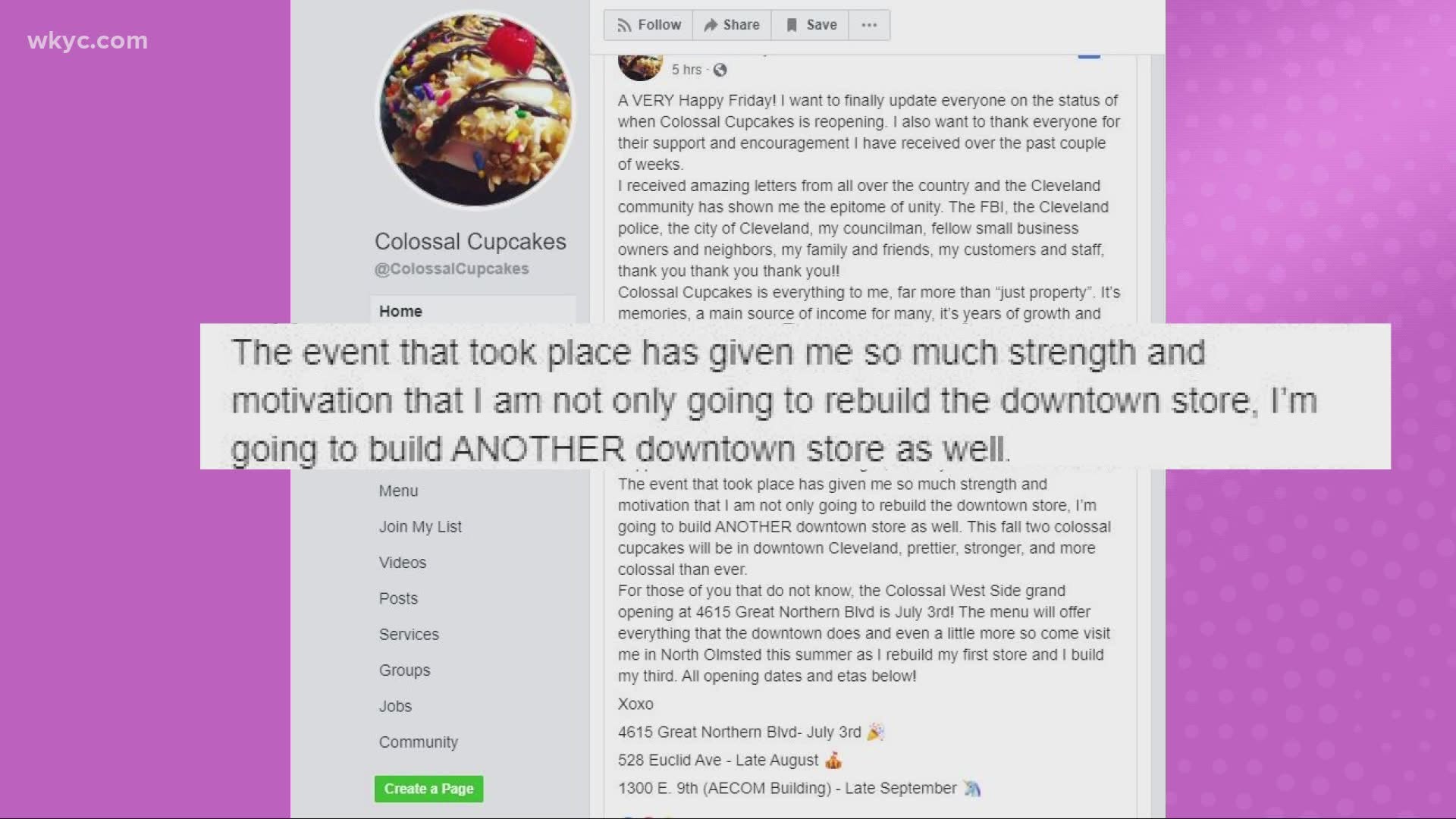 CLEVELAND — Despite the vandalism that caused massive damage at Colossal Cupcakes last month, owner Kelly Kandah is looking ahead to what appears to be a bright future.

While repairs continue at her Euclid Avenue location, Kandah is busy preparing to open a new Colossal Cupcakes at Great Northern Mall next month.

But that's not the only good news.

In a Facebook post on Friday night, Kandah announced that she is planning to open a second downtown Cleveland location on E. 9th Street inside the AECOM Building in late September.

"For nearly ten years I had business owner fears that I was forced to face in a matter of minutes. Broken glass and equipment, graffitied mirrors and floors, splashed paint on tables and counters, stolen memorabilia and electronics, and employees instilled with fear for their lives all happened and all at once. The thing is, now my fears have been faced. The event that took place has given me so much strength and motivation that I am not only going to rebuild the downtown store, I’m going to build ANOTHER downtown store as well. This fall two colossal cupcakes will be in downtown Cleveland, prettier, stronger, and more colossal than ever," she wrote.

The news from Kandah came on the same day that the Cleveland Division of the FBI announced the arrest of a suspect for the vandalism at her store on May 30.

RELATED: Man arrested for alleged role in Cleveland ‘civil unrest’ amid May 30 protests

Tandre Buchanan, Jr. was taken into custody without incident on Thursday at his place of employment in Garfield Heights on a federal warrant for interference with commerce by threats or violence.

Eric Smith, Special Agent in Charge, said Buchanan crossed the line of what was supposed to be a peaceful protest and engaged in criminal activity.

“Buchanan violated the rights of a fellow Clevelander by breaking into her business, destroying her property and terrifying her and her employees as they hid inside,” Smith said. “The FBI commends the public and the media for quickly identifying Buchanan in the surveillance photos disseminated. Law enforcement will ensure that those that destroyed parts of our city are held accountable.”

Investigators are continuing efforts to identify and find individuals responsible for the damage caused in Cleveland that day. Anybody with information from the May 30 unrest is asked to call authorities at 216-622-6842. Tipsters can remain anonymous.

Last week, the FBI announced the arrests of two people for their alleged roles in the civil unrest. The duo now faces a four-count indictment for rioting and firearms charges.

RELATED: Pennsylvania men indicted on rioting and firearms charges during violence in Cleveland on May 30

In the meantime, Kelly Kandah remains grateful for the support she's received locally and nationwide.

"I received amazing letters from all over the country and the Cleveland community has shown me the epitome of unity," Kandah added on Facebook. "The FBI, the Cleveland police, the city of Cleveland, my councilman, fellow small business owners and neighbors, my family and friends, my customers and staff, thank you thank you thank you!! Colossal Cupcakes is everything to me, far more than 'just property.' It’s memories, a main source of income for many, it’s years of growth and it’s my home."

Colossal Cupcakes' Great Northern Mall location will open on July 3. Kandah says the menu "will offer everything that the downtown does and even a little more so come visit me in North Olmsted this summer."

Kandah expects the Euclid Avenue store to be back open in late August.

Watch an in-depth timeline of how the events of that day unfolded (video from May 31, 2020):