A peaceful protest was held Monday afternoon, with students and staff standing in solidarity against the comments made by employee Kevin Paridon on social media. 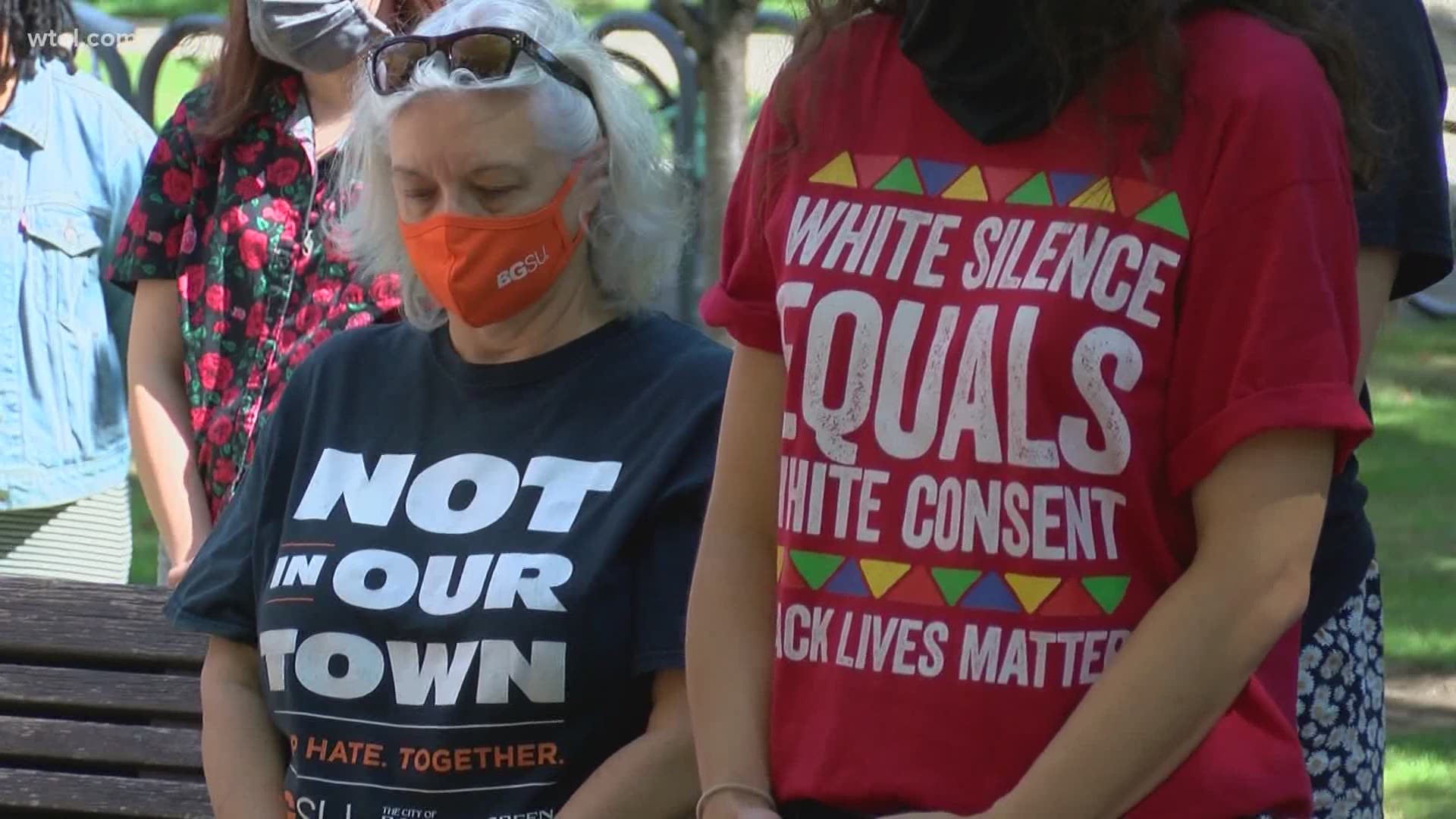 BOWLING GREEN, Ohio — A Bowling Green State University employee is on paid administrative leave after the university learned that he used "racist and violent" language on a social media thread Friday.

On Monday, BGSU said that employee Kevin Paridon is on paid administrative leave, as required by Ohio classified civil service rules, pending the outcome of the investigation.

The comments were screen-grabbed during a Facebook Live post made to honor Martin Luther King Jr.'s "I Have a Dream" speech on 13abc's page. They were then placed on a Facebook post on the official BGSU page to call attention to Paridon's comments. Paridon had shared the video of the speech, referring to the day by using a racial slur and verbiage consistent with violence.

According to his social media profile, Paridon is a groundskeeper for Bowling Green State University.

A vigil and protest was held Monday at noon in front of the Bowen-Thompson Student Union to speak out about such language, and university officials said BGSU supports all those who protest peacefully.

"This is about the faculty and the students and showing our support and showing that we can, that we're outraged by something like this," faculty member and co-organizer, Rebecca Skinner Green said.

At least 150 faculty, staff and students stood in solidarity against Paridon's Facebook comments.

His posts prompted outrage from fellow staffers and students at the university. Some are now demanding that he be fired.

Previously, BGSU officials said: "We clearly do not support this language, whether by an employee or anyone, and find it to be not just offensive, but not representative of the University’s values of diversity and belonging."

"The more I thought about it, I felt compelled to do something. I wrote a letter, just stating my outrage about this," Skinner Green said.

The letter by Skinner Green led to Monday's protest. She, along with other faculty, felt it was a good way to express their emotions and show support for people of color on campus immediately.

"This is unacceptable that a BGSU employee would say something, not only racist, but inciting violence," faculty member Martha Chandran-Dickerson said.

She added it's their responsibility to ensure that people of color feel safe when they are on the campus.

Students participating felt it was important to stand with each other especially with the recent events happening across the nation.

"It's really important to show solidarity and stand with our fellow black brothers and sisters," BGSU Sophomore, Yasmina Al-Khazen said. "Obviously what this faculty member did is unacceptable, he shouldn't be here, he needs to be out, he needs to be fired."

"On Friday, Bowling Green State University became aware of the racist and violent comments shared on Facebook. The Office of Human Resources has begun an immediate investigation into these incidents, and employee Kevin Paridon is on paid administrative leave, as required by Ohio classified civil service rules, pending the outcome of the investigation.

"The University is aware of today’s vigil and protest, and supports all of those who participate peacefully. We adamantly reject the racist and violent messages in the employee’s Facebook comments. The Division of Diversity and Belonging is a place of support to engage our students, faculty and staff regarding this incident and the recent national tragedies.

"Our shared expectation remains that we should value and respect one another, and each student, faculty and staff member must focus on fostering a diverse community, where each of us can belong. Clearly, there is more work to do."