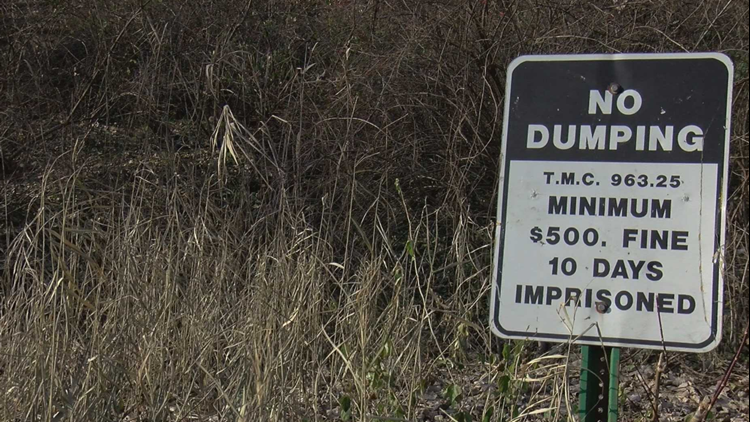 TOLEDO (WTOL) - You might remember DiDi Fitzgerald. She's an east Toledo woman who has come to WTOL in the past about illegal dumping on her street.

Fitzgerald said she's had enough after on-and-off dumping for the 17 years she’s lived on Utah Street in east Toledo.

She's come to WTOL time and time again about trash lining her street. Those reports led to clean-ups by the city, but Fitzgerald said she didn't have to wait long before the garbage once again began to gather.

“I'm not faulting the city for not cleaning it up,” she said. “My problem is, it is illegal, why can't we enforce the statutes? I've not seen any stories of anyone being prosecuted for illegal dumping."

So we took her fight against the blight to Toledo's code enforcement department.

Kennedy said they're well aware of this plot of land. City workers have been there 34 times since 2016, one of the sites in town they visit most frequently, he said.

“It's basically a barren strip of Utah that just has overgrowth and vegetation along it, which is perfect for illegal dumpers,” Kennedy said.

But that might have come to an end. WTOL has learned authorities have charged a south Toledo man, 34-year-old Dorian Johnson, for dumping on Utah Street. Kennedy said Johnson may not have been the one to physically dump the trash, but paying someone to do so is still illegal if it ends up there.

Kennedy said he wants to see all dumpers prosecuted so it comes to an end in Toledo.

“Put them in jail,” he said. “I mean, force them to pay restitution because the city has expended over $20,000 in clean-up costs alone just for that area."

Johnson was brought up on three charges for illegal dumping. He's required to appear in municipal court.