Since being hired in 2015, one officer has now been suspended for more than 150 days. Another has faced departmental reviews 11 times. 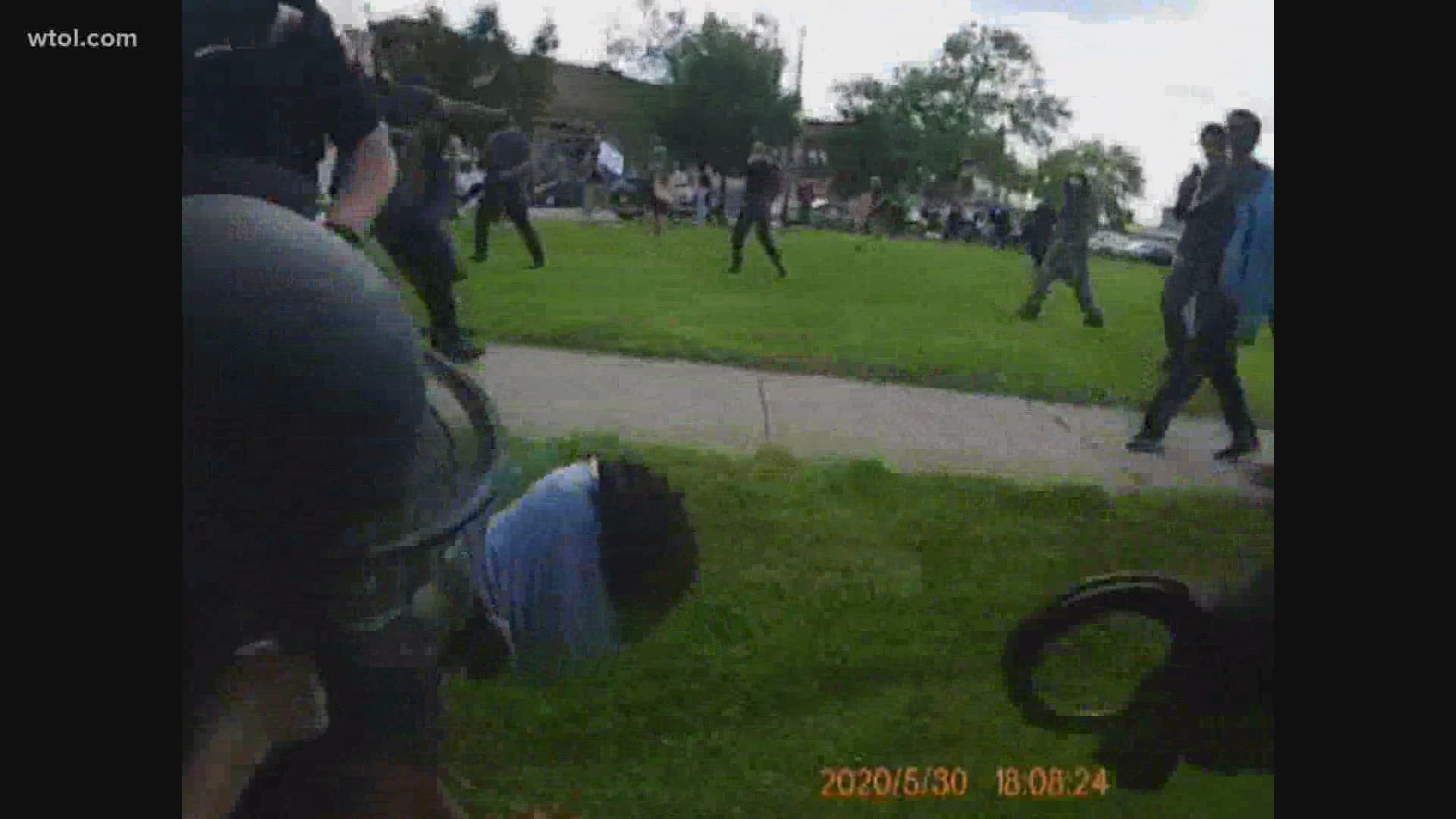 TOLEDO, Ohio — On Wednesday afternoon, the Toledo Police Department announced discipline against three officers for their actions during the May 30 protest.

Jeffery Breeze will not be a police officer in Toledo for four months. It will be 75 days before Melvin Russell patrols the streets again.

But it's not the first time they have been suspended.

RELATED: Demonstrators from a May 30 protest call on officers to be fired following suspensions

RELATED: 3 Toledo officers disciplined for actions during May 30 protest-turned-violent

On March 9, 2019, Breeze responds to a domestic violence call.

After calmly asking for details...

Breeze explodes when residents of the home keep interrupting.

"All right, everyone shut up. You shut your mouth."

After snapping at the suspect, Breeze turns on the woman who called for police help.

An Internal Affairs report shows that Breeze has not been to the house before and knew of no previous incidents.

And then he appears to challenge the suspect...

"I'll disrespect you any way I want. Then get your [expletive] up and get froggy, [expletive]."

Froggy is a slang term for jumping someone or starting a fight.

Since being hired in 2015, Breeze has now been suspended for more than 150 days. The 2019 incident results in a 28-day suspension.

During an Internal Affairs interview, an officer asks Breeze if he has an anger problem.

He is one of three officers disciplined for their May actions.

At one point, Breeze walks up to a sitting protester and maces him. On his body cam, it is hardly noticeable, except for the man recoiling as Breeze approaches

But another protester captures the incident on video. That video shows Breeze quickly walking up to him and a spray going into the air.

Less than an hour later, Breeze responds to an unruly crowd in front of a Toledo apartment complex. A social media video shows a protester tackling a female officer and the situation explodes as multiple officers jump on the protester.

Breeze is not wearing his body cam, something which he is disciplined for, but he can be seen on the cam of Melvin Russell. As Russell rushes to help, Breeze is on the ground, pummeling the suspect.

His May actions result in a 120-day suspension and a last chance warning. 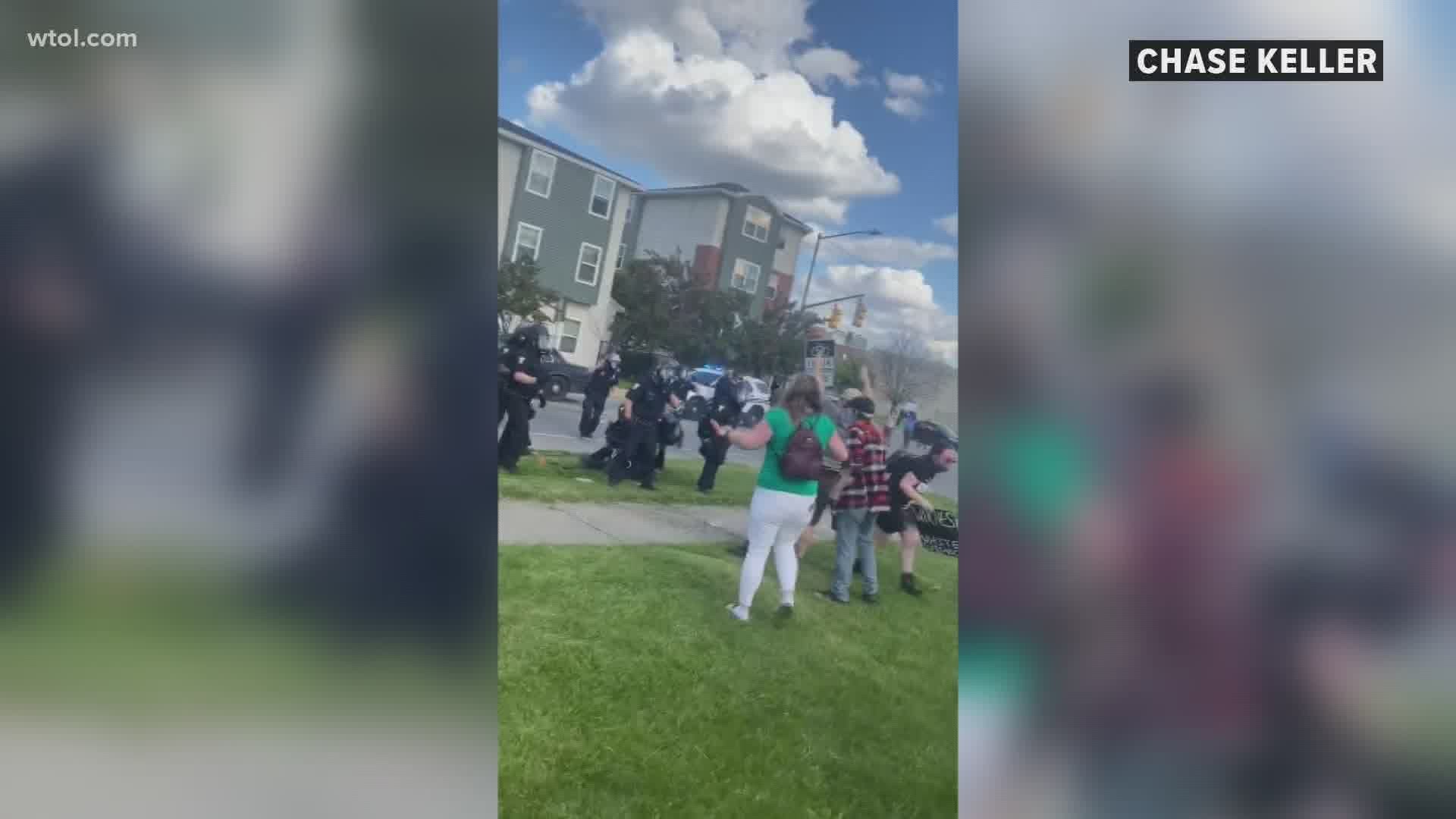 Twelve seconds later, Russell violently swings his helmet at the man. His cam does not clearly capture that exchange, but it is seen on multiple videos sent to 11 Investigates.

Toledo Police suspend Russell for 75 days for the encounter. A third officer, Christopher Guanilo, was also involved in the melee and has received a written reprimand.

Like Breeze, Russell has a long history of discipline since being hired in 2010  by the department. He has faced departmental reviews 11 times. He was suspended five days for a 2018 altercation with a man being booked into the Lucas County jail. The IA report says Russell appeared to challenge the man to a fight. When the man refused to sit down, he pulled on his braids. Russell says he was trying to push him down by the shoulder.

RELATED: 2 TPD officers at heart of protest investigations have history of disciplinary actions

11 Investigates previously reported that Russell was sued last year by Frank Prude, the brother of Toledo Councilman Larry Sykes. Prude alleged that Russell racially profiled him, cutting him off while driving a black truck then following him to his home, where two other officers joined him. Prude says he was terrorized during the incident and was given a ticket. His traffic citation was dismissed by the prosecutor. Prude's lawsuit was dismissed, in part, because it was filed past the two-year statute of limitations.

In 2019, Russell responds to a report of a man threatening people while carrying a baseball bat. Russell gets the man's license. After terse exchanges, the body cam shows Russell dropping the man's license to the ground as the man attempts to grab it.

Later, the man demands a property receipt for his confiscated bat. After the man delays in signing the receipt, Russell throws the receipt in the air and walks away. He is reprimanded.

The man who shot a video of Russell striking the protester with his helmet wonders why the officer still has a job.

"I absolutely believe that Melvin Russell should be fired. He should lose his job and face repercussions," Chase Keller says. "He did nothing short of commit felonious assault while wearing a badge."

A police union official had no comment on the disciplinary actions.

Russell has also been issued a final warning. Details from previous disciplinary proceedings are no longer in his disciplinary files because of a provision in the police contract that removes them after a set period of time.

Police Chief George Kral says he understands the gravity of the actions of his officers.

“Police legitimacy cannot improve if departments fail at policing their own," Kral says. "I will ensure that officers are held accountable when their actions are found to violate department policies, and I will always support the hundreds of officers that positively represent Toledo Police.”