The hottest new trend in hemp: Highs, lows and unknowns of 'euphoric' Delta-8

Delta-8 products can be considered a cousin to Delta-9, with both containing psychoactive properties and THC. But one remains illegal at the federal level. 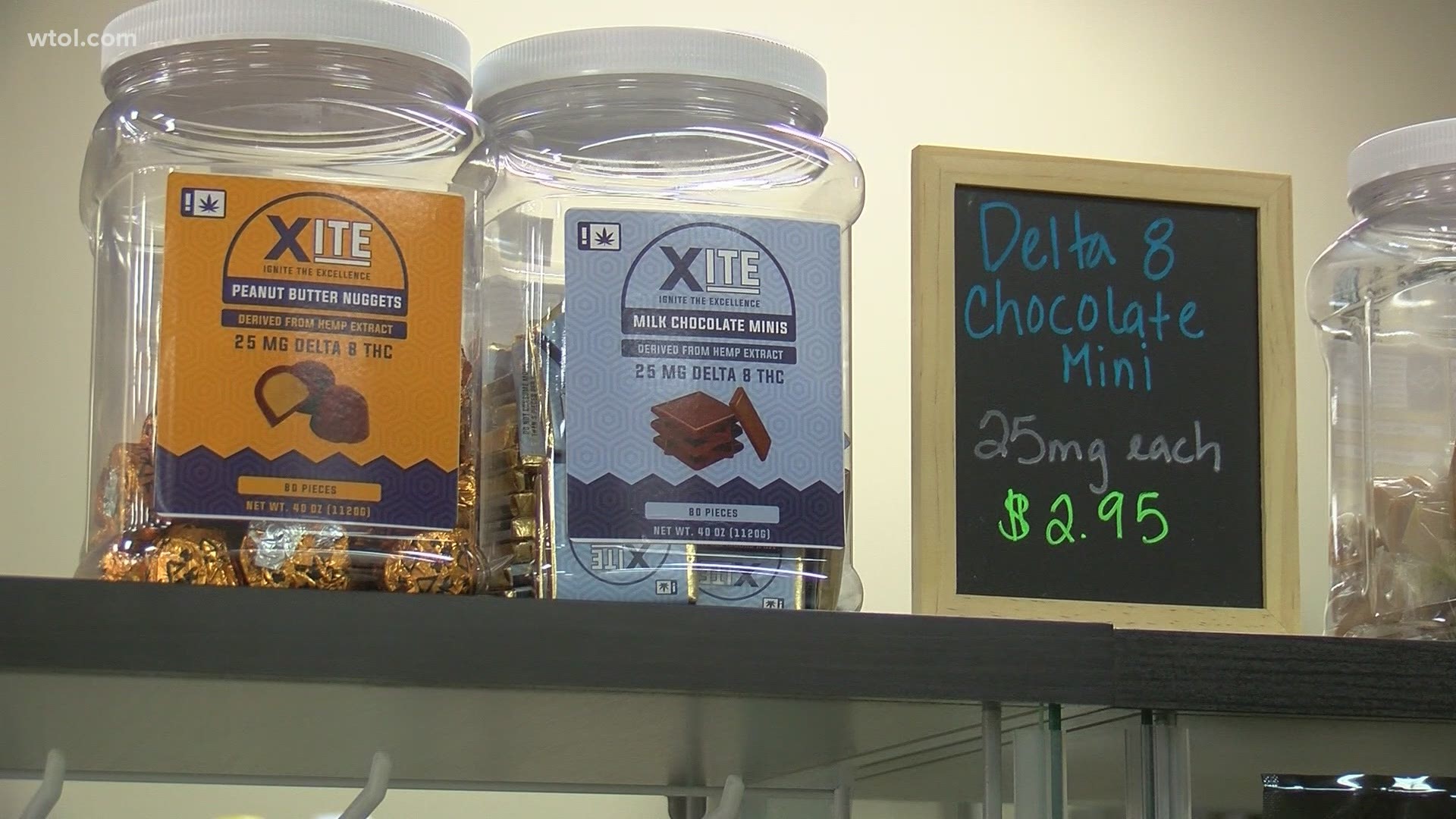 TOLEDO, Ohio — There's a new product sharing the shelves with CBD, creating a buzz in the hemp industry and a different kind of buzz for consumers, too.

In the past month, Kevin Spitler at Toledo Hemp Center has seen a large increase in demand for everything Delta-8.

"It does have a similar euphoria as marijuana, just not as intense. Not as much paranoia attached to that euphoria," Spitler said.

It's the Delta-9 THC that's the active ingredient in marijuana that gets you high. Delta-8 is slightly different on a molecular level. Delta-8 products come in a wide variety of forms and are fully legal under Ohio's current hemp laws.

Due to those molecular similarities and the presence of THC, you'll still fail a drug test, Spitler says. That's because the tests can't tell the difference between Delta-9 and Delta-8, despite the differences in legal status.

At Toledo Hemp Center, you have to be at least 21 to buy Delta-8. No medical marijuana card is required, since the two products differ.

"Being that you don't need an actual medical card to get it, it's nice and convenient for a lot of people, plus a lot of people aren't looking for that real heavy euphoria that marijuana or medical marijuana is going to provide," Spitler explained.

Credit: WTOL 11
A warning label on a bottle of Delta-8 gummies. The warning includes that D-8 may cause a failed drug test, and that per state regulations and guidelines, the product contains no more than 0.3% total THC.

On a federal level, Delta-8 is legal under the 2018 Farm Bill which removed hemp from the definition of marijuana as a controlled substance, as long as it contains no more than 0.3% Delta-9 THC.

Spitler says he is conscious of where his products come from and feels confident saying it's beneficial, but doctors disagree.

"We don't know what it is, whether it's safe to use because we don't have that data," said Dr. Rajiv Parinja, a psychiatrist with Mercy Health. "So my recommendation to people would be if you have anxiety, if you think you have an anxiety disorder, you should seek out your primary care physician."

He says he would not advise people to use Delta-8 without clinical research since there is so much unknown, especially when it comes to regular and long-term usage.

Which may be the reason a dozen states in the U.S. have already moved to make Delta-8 illegal. That even includes some states where Delta-9 is legal, like in Colorado, where recreational marijuana was legalized in 2012.

RELATED: Michigan hemp farmer educating others to clear the air of common misconceptions about the crop