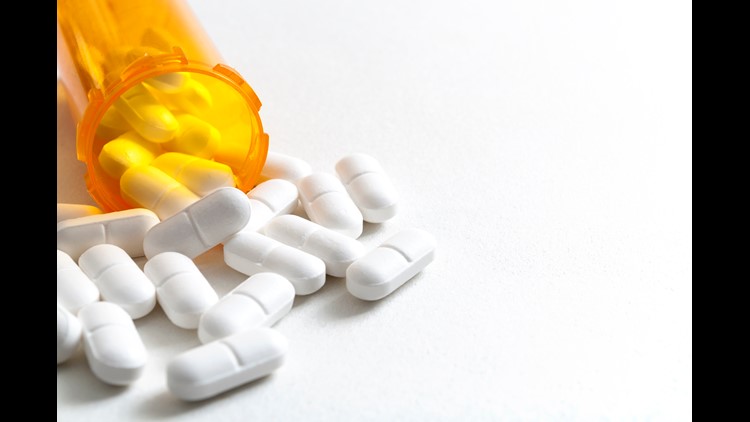 Opioid epidemic, drug abuse and overdose concept with scattered prescription opioids spilling from orange bottle with copy space. Hydrocodone is the generic name for a range of opiate painkillers

CLEVELAND — One of the largest makers of generic opioids has settled a lawsuit with two Ohio counties, removing the company from the first federal trial over the toll of the opioid crisis.

United Kingdom-based Mallinckrodt announced the deal with Cuyahoga and Summit counties on Friday. Under the settlement, the company would pay a total of $24 million and donate products, including some used to treat addiction, worth another $6 million.

The company's general counsel said in a statement that resolving the first cases gives it time to work toward a "global resolution" of opioid lawsuits. Nearly every state in the U.S. and more than 2,000 local governments are suing drug companies over the crisis. Mallinckrodt remains a defendant in hundreds of those cases.

The deal makes Mallinckrodt the third company in recent weeks to announce a deal with the two counties ahead of the trial, scheduled to begin Oct. 21 in U.S. District Court in Cleveland. Allergan agreed to pay $5 million and Endo Pharmaceuticals $10 million.

Perhaps the best-known manufacturer of prescription opioids, OxyContin maker Purdue Pharma, is negotiating in an attempt to settle all the claims against it. One settlement proposal calls for Purdue to pay between $10 billion and $12 billion and requires that the controlling Sackler family give up ownership.

Opioids, including prescription drugs and illicit ones such as heroin and fentanyl, have been linked to more than 400,000 deaths in the U.S. since 2000.

Mallinckrodt was one of the biggest manufacturers of opioids in the country from 2006 through 2012. Its 30 milligram oxycodone pills were especially sought after by people addicted to opioids.

The lawsuits allege the company wrongly shipped orders it knew were suspicious.