The winners of each round will be announced Wednesdays at 7:29 p.m. The fourth $1 million winner was Suzanne Ward, a resident of Findlay. 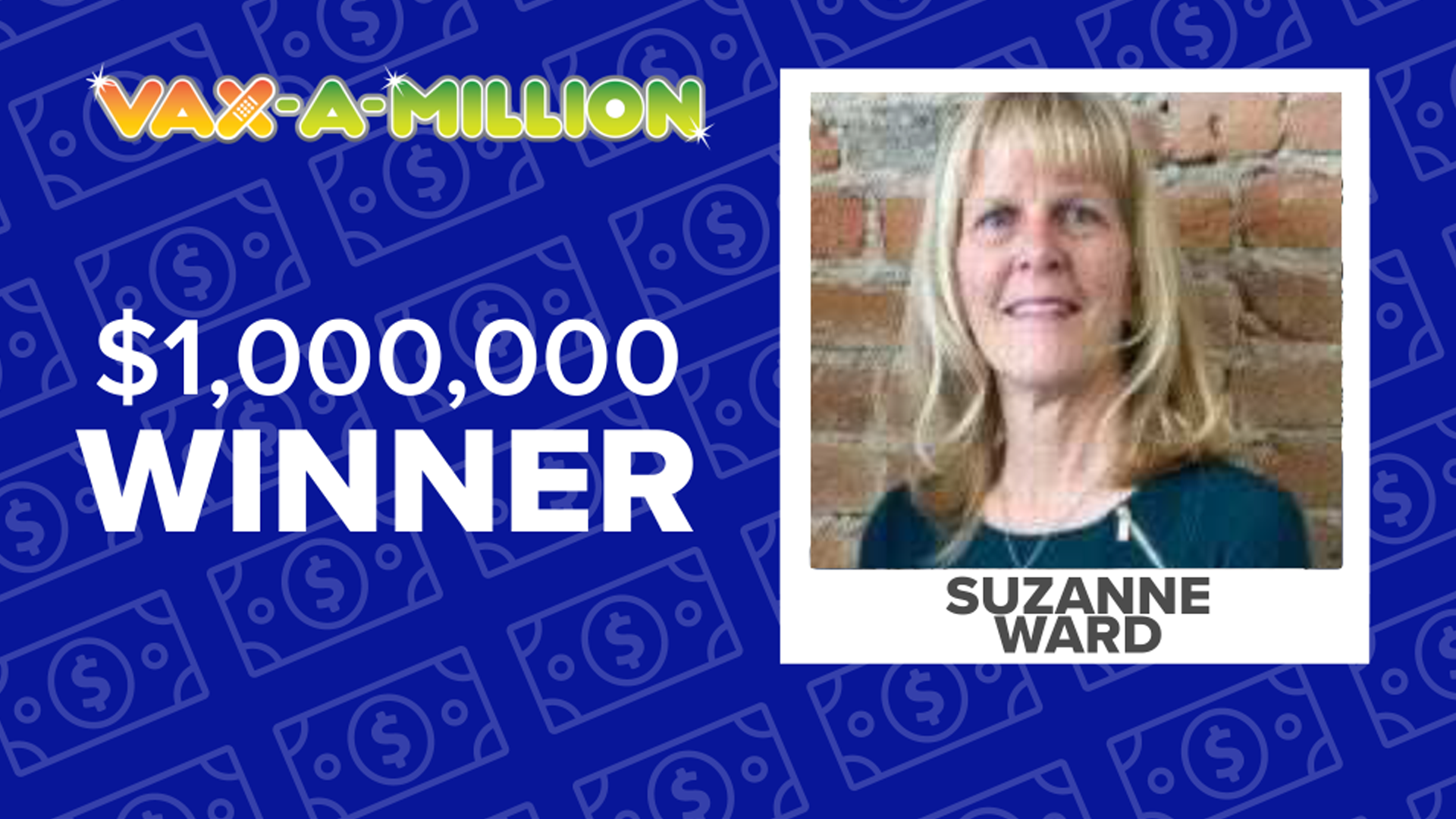 COLUMBUS, Ohio — The final Vax-a-Million winners will be announced Wednesday. Here's a recap of the past winners as we prepare to find out who has won the fifth million-dollar prize and four year scholarship.

WEEK 4 - A WINNER FROM FINDLAY!

The winners for week four of Ohio's Vax-a-Million lottery were announced June16, and that million dollars is going to a resident of Findlay.

The fourth winner of the Vax-a-Million million-dollar lottery was Suzanne Ward of Findlay.

RELATED: 'I wasn't really sure if I was reliving a dream' | Findlay's Suzanne Ward is Ohio's latest Vax-a-Million winner

Greg said that he and his wife didn't get vaccinated as part of an incentive, but instead received their COVID-19 vaccines as soon as they could.

They're overwhelmed and still processing. Both had signed up for the drawing and are going to talk tonight about what they want to do with the money. Greg says they're thinking about using the bulk of it to help some of their family.

Fran and I enjoyed talking with Ohio's newest #OhioVaxAMillion winners tonight! Sean Horning from Cincinnati won a college scholarship, and Suzanne Ward of Findlay won $1 million. We're grateful to them and every other Ohioan who has been vaccinated. https://t.co/Svppf9uA8O pic.twitter.com/Nj1zqDEtKu

The four-year, full-ride scholarship was awarded to Sean Horning of Cincinnati.

You can still register for the final drawing - just make sure you do so by Sunday. To sign up online, click here. You can also call 1-833-4-ASK-ODH.

Congratulations to our newest #OhioVaxAMillion winners! If you're vaccinated and haven't yet registered to win, visit https://t.co/Svppf9uA8O to register for the fifth and final drawing next week. pic.twitter.com/4fnT2wEfM0

The third winner of $1 million announced last week was Mark Cline of Richwood in Union County, just north of Columbus.

The winner of the full four-year scholarship to any state university was Sara Afaneh, from Sheffield Lake in Lorain County.

Congratulations, Sara - our Vax-a-Million scholarship winner! Thanks for getting vaccinated! pic.twitter.com/ltugiloQaG

WEEK 2 - A WINNER FROM TOLEDO!

The winners for week two of Ohio's Vax-a-Million lottery were announced June 2, and one of those is a lucky Toledoan.

The state's second million-dollar winner is Jonathan Carlyle, a resident of Toledo.

Congratulations, Jonathan! You just won a million dollars! Thank you for getting vaccinated! pic.twitter.com/EalWPMBagX

The winner of the full four-year scholarship to any state university is Zoie Vincent from Mayfield Village, Ohio, a suburb of Cleveland in Cuyahoga County.

Gov. Mike DeWine sent a congratulations to her with a little help from FaceTime, since Zoie's out of town celebrating another big day in her family!

Congratulations, Zoie - our Vax-a-Million scholarship winner! Zoie is out of town for her aunt’s wedding, but we were able to congratulate her over FaceTime! If you’re between 12 & 17 and had at least one dose of the vaccine, you could be next! Sign up at https://t.co/ZmJ8iKoSlV pic.twitter.com/tgfpfgUTYa

The first round of winners in Ohio's Vax-a-Million contest was announced May 26, though none of them were from northwest Ohio.

The state's first million-dollar winner is Abbigail Bugenske, a resident of Silverton, Ohio in Hamilton County.

In addition to the million-dollar prize, one lucky teen, Joseph Costello of Montgomery County's Englewood, won a full four-year scholarship to any state university of his choosing.

Congrats, Joseph! You just won a full-ride college scholarship! If you’re between 12 and 17 years-old and had at least one dose of the vaccine, you could be next! Sign up at https://t.co/ZmJ8iKoSlV! pic.twitter.com/StHlWewhW5

The next drawing winners will be announced on June 23 at 7:29 p.m., but what are your odds of winning and how much are these winners actually taking home?

Adult Ohioans who have received at least one shot of the COVID-19 vaccine are eligible to win one of five $1 million prizes. Children 12-17 who have been vaccinated can enter a drawing for a full scholarship at any state university.

Winners of the cash will receive a lump sum payment of $1 million, but nearly one-half will go right back to Uncle Sam in taxes. Here's how it works:

RELATED: Yes, vaccinations increased in Ohio after the vaccine lottery was announced

ADVICE FROM A PROFESSIONAL

If you are one of the lucky ones to hear your name called, paying off your debts should be a top priority.

Alan Lancz, president of Alan B. Lancz & Associates investment advisory firm in Toledo, said circumstances vary from person to person. However, paying off student loans and credit card debt can be as good as investing.

"Instead of trying to get 10 or 12 percent in the stock market, what you can do is avoid the situation where you're paying 12 or 15 percent on your credit cards," Lancz said. "So that's an automatic guaranteed return."

Lancz said investing the remaining money into conservative stocks would be wise. If returns and dividends remain consistent, it's easy to net $75,000 a year without touching your money.

He did however warn against putting money in bonds.

"If interest rates continue to trend up, you'll lose money in bonds," he said. "Right now you really want to inflation hedge. You're going to be paying higher at the pump, you're going to pay higher food prices over the next few years, so keep that in mind when you invest."

Winners are chosen on Mondays and announced on Wednesdays to allow for verification of eligibility.

Winners will be revealed Wednesdays at 7:29 p.m. for five weeks. Multiple alternate winners will be chosen in the event of falsified entries.

Permanent residency is required. The state uses the same criteria it does to issue an Ohio driver's license.

$1 million winners will receive a one-time payment soon after the drawing.

Scholarship winners will still be required to meet admission requirements for the state university they choose to attend.

The funds are taken from Ohio's allotment of CARES Act dollars, which allow states to spend the money to combat the pandemic. Using funds to incentivize vaccinations is covered under the Department of Treasury's guidelines.

The state has seen an increase in vaccinations since announcing the lottery, including a 94 percent increase in 16 and 17-year-olds.