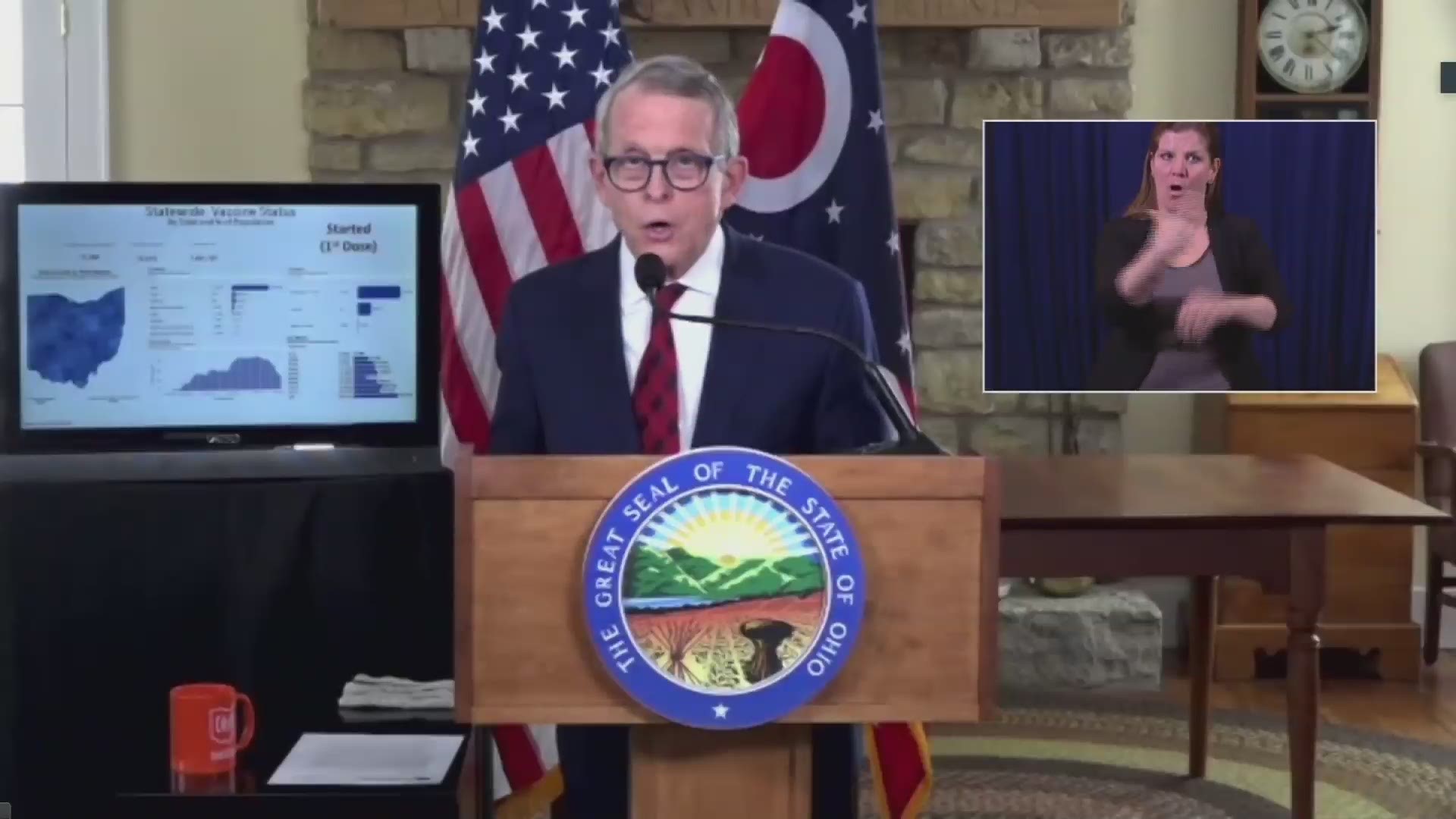 During the broadcast, the Governor addressed several topics, including the latest COVID-19 numbers, the future of vaccinations in the state, and the possibility of fans making their way into major league baseball games this spring.

Gov. DeWine kicked off the meeting by providing an update on the latest COVID-19 numbers in the state of Ohio. On Sunday, the state reported less than 1,500 new cases in a 24 hour period, the lowest number of new coronavirus cases that the state has seen since mid-October.

RELATED: Ohio Department of Health says state's COVID-19 death toll has been underreported by about 4,000 people

Over the weekend, Ohio hit 650,000 residents fully vaccinated against COVID-19. While the state is currently still in Phase 1B of the vaccine rollout, Gov. DeWine said that he does not plan to adjust eligibility guidelines for the COVID-19 vaccine in the state at this time.

RELATED: COVID-19 vaccines in Ohio: How you can make an appointment at a store near you

With the March 1 deadline fast approaching, schools around the state are working overtime to immunize personnel against COVID-19. The topic has been a hot-button issue as of late due to many major school districts, including Cleveland Metropolitan School District, stating that they may not be able to stick to that deadline. However, just recently the school announced its plans to remain on course and get kids back in the classrooms, via a hybrid model.

At the beginning of February, Ohio saw an unprecedented rise in filings for unemployment, a nearly 200% increase. The state has now boiled the issue down to fraudulent claims, which many Ohioans are now finding out that someone has collected money in their name. Unfortunately, the fraud is also affecting Ohioans who filed for unemployment lawfully.

Last week, Gov. DeWine said that he plans to have more information on the status of the issues that the Ohio Department of Jobs and Family Services (ODJFS) is facing. During his Monday press conference, however, DeWine did not dive into the issues facing ODJFS.

RELATED: Unemployment fraud in Ohio: 3 things you need to do if somebody has stolen your information

The Governor was also asked on Monday about guidance for anyone looking to plan future events.

While he did mention the possibility of teams like the Cleveland Indians being able to have a 30% capacity within their stadiums, DeWine was unable to provide any more details about events like proms and graduations.

Both DeWine and Chief Medical Officer Dr. Bruce Vanderhoff said that the virus is still evolving and that it would be impossible to give any guidance based on the current situation that Ohio is in.

The Governor is expected to hold another 2 p.m. press briefing on Thursday, Feb. 25.

You can watch the full briefing with Gov. DeWine in the player below: