Those with early-onset medical conditions qualify for vaccine, but some still being turned down | Ohio Coronavirus Update Feb. 18 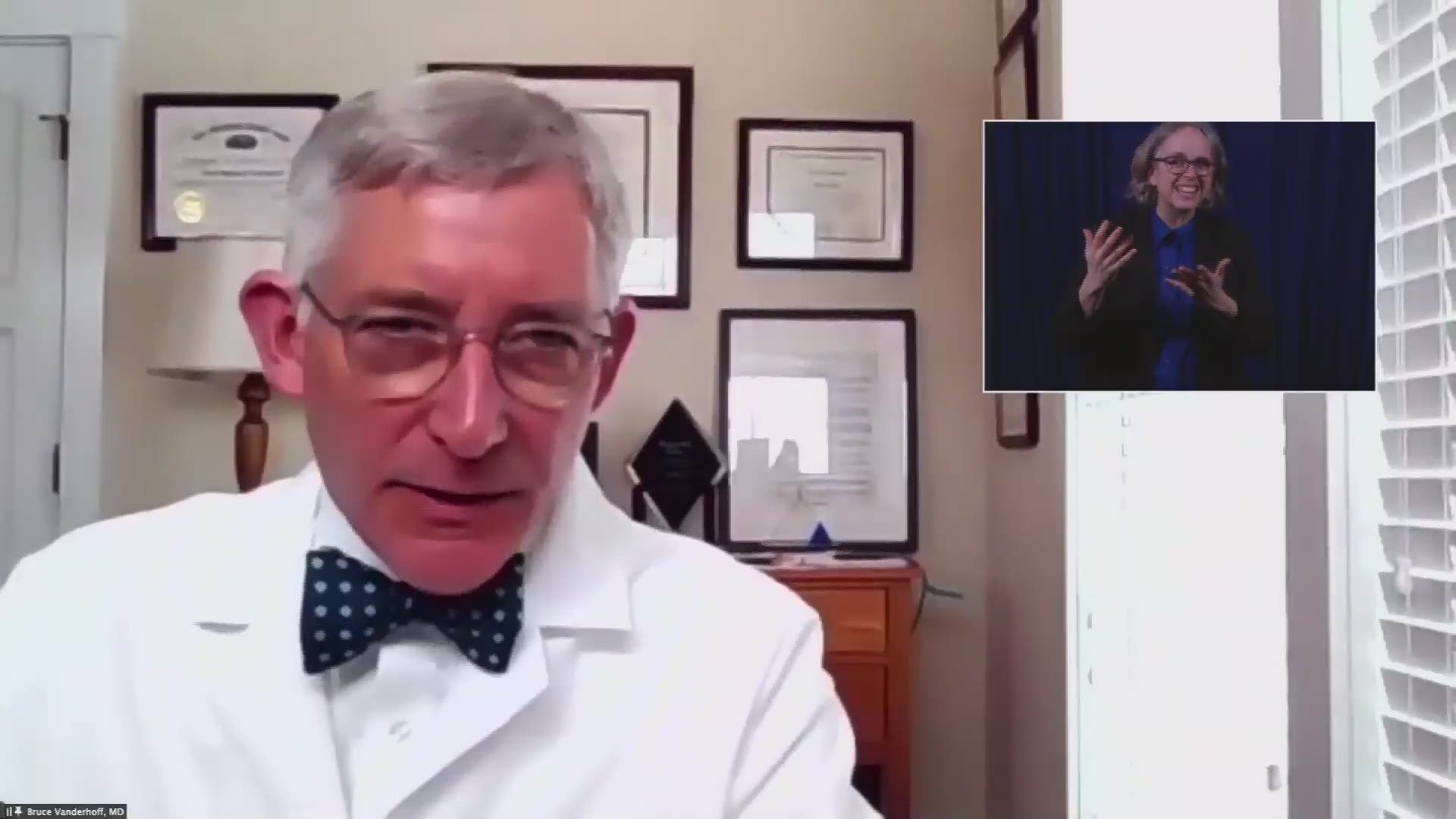 Here is a breakdown of what was discussed.

Due to severe winter weather, vaccine shipments across the state have been delayed.

Ohioans with vaccine appointments this week are encouraged to check the road conditions before heading out, and reach out to their provider to make sure their appointment hasn't been canceled or postponed. DeWine said providers have been working to reach out to patients through phone and e-mail to notify them of any changes, but if you have not heard from them, it would be a good idea to reach out to them directly.

DeWine said that despite the delays, over 29,000 first doses and 28,000 second doses were delivered in the state on Wednesday.

For the providers that have been delayed, DeWine has asked that appointments be rescheduled ASAP.

The program is aimed at continuing the vaccination process as new residents and staff members continue to enter these facilities.

On a regular basis, nursing homes will be able to enroll and let the state know what their needs are. Those needs could include a mass vaccination clinic, doses for new residents and staff, people who declined previous opportunities but have since changed their mind, etc.

Ohio Department of Aging Director Ursel McElroy said her team is trying to match facilities with the pharmacy of their choice as they take on additional vaccinations.

Nursing homes generally have a pharmacy company that serves them, bringing in necessary medications. The idea is to build on these relationships that already exist to maintain vaccination in the state's long-term care facilities.

If a facility does not already have a relationship with a pharmacy, McElroy said the state would then step in to coordinate, so no facility is left behind.

DeWine said that Ohioans with loved ones who are in nursing homes currently, who were not vaccinated before they were admitted, are likely to get an opportunity to receive their shot in the next week or so.

Though the state has seen a dramatic drop in COVID-19 cases within our nursing homes and assisted living facilities, DeWine said he wants to keep driving that number down. He noted that more than half the coronavirus-related deaths reported in the state have come out of nursing homes.

New guidance on nursing home visitation is on its way, DeWine said Thursday.

Although the state does currently allow visitation, Ohio's COVID-19 health and safety protocols have not been revisited since July.

THOSE WITH EARLY CHILDHOOD CONDITIONS CARRIED INTO ADULTHOOD

Vaccine eligibility opened this week in Ohio to include those born with, or who have early childhood conditions, that carried into adulthood puts them at a higher risk of developing complications from COVID-19.

The governor made note of hearing numerous complaints that some people who do now qualify because of these conditions have been turned away.

"That is not right. Those people should be able to get their vaccination," DeWine said.

Ohio Department of Health Chief Medical Officer Dr. Bruce Vanderhoff reminded Ohioans Thursday which conditions qualify someone for vaccination under Phase 1B. Those conditions are:

STATUS OF COVID-19 IN OHIO

DeWine said one of the things we know today that we didn't know a few months ago is "the power of the mask."

As we look forward to spring, DeWine said he believes masks are what will allow Ohioans to do a lot of the things they like to do, including sporting events, prom, etc.

However, Vanderhoff said we should all be cognizant of the more contagious variants that have made their way to the US. The B-117 UK variant, for example, is now in at least 40 states, including Ohio.

He explained that these new strains are "an important signal" in where the virus is headed. It is becoming more contagious and is given more opportunity to change as it gets into more people. The virus is also becoming more efficient and Vanderhoff said it will continue to do so until Ohioans as a group are largely immune, and it can no longer infect enough people to duplicate in the fall.

He explained that the vaccine is the fastest way to achieve herd immunity and the best way to do so without unnecessary pain and suffering. However, it will still take a while for enough people to receive the vaccine to hit that goal.

While the current vaccines are working well, he said, the national vaccination effort needs more time in order for Americans to feel its effects.

In the meantime, Ohioans should keep up with preventative measures like masks and distancing - which Vanderhoff said have both proven to work. Flu hospitalizations are dramatically down this year. Last flu season, there were 5,500 hospitalizations, this time around, there have been less than 100. Vanderhoff credits that large drop with the safety measures Ohioans have been taking in preventing the spread of COVID-19.

On Thursday, the Ohio Department of Health reported:

A note on the state's coronavirus website states that the Bureau of Infectious Disease and the Bureau of Statistics are continuing to reconcile death data after the health department recently announced as many as 4,000 deaths went underreported. The ongoing review of the numbers will result in some fluctuations of the death data moving forward.

On Thursday, there were 1,516 COVID-19 patients in Ohio's hospitals, continuing on the state's downward trend. Just two weeks ago, that number was 2,172.

Following heavy snowfall impacting a majority of the state, some providers have been forced to cancel or postpone COVID-19 vaccine appointments.

The severe weather has also caused delays in vaccine shipments by a period of one to two days. DeWine said Tuesday that the Ohio Department of Health (ODH) has contacted all of the providers within the state of Ohio about this potential slowdown.

Ohio is developing a centralized COVID-19 vaccine scheduling website, creating a one-stop way to find an appointment in the state.

DeWine said his team chose to build their own system because the federal system "would not work for Ohio.

The first phase for launching the new dashboard is complete; the site is functional and ready on the technical side.

DeWine explained that the next phase of the site's launch will be aggressive outreach to vaccine providers in an effort to sign them up to participate in the new scheduling system and begin their transition.

Once enough participating providers have signed up, the state's third phase will be to make the site live to those seeking to be vaccinated.

"Our goal is for Ohioans to have a positive customer experience when we launch to make appointments," DeWine said.

Those interested in getting a vaccination will be able to put their zip code in and pull up appointments within 20 miles.

To help Ohioans without internet access, the state's area agencies on aging have been called upon to help Ohioans schedule an appointment.

DeWine again encouraged school leaders to do everything in their power to get kids back to in-person learning by March 1.

His remarks came after Friday's impromptu press conference, in which the governor addressed several districts in the state that have already voiced plans to renege on their deal to return in exchange for the vaccine.

Three districts: Cincinnati Public Schools, Akron Public Schools and Cleveland Public Schools have all expressed plans that go against the state's March 1 return-to-school deadline, despite promising to do so. All three have already received their vaccinations.

On Dec. 23, DeWine announced that any school in Ohio that could guarantee their students would be back to some form of in-person learning by that March 1 date, would have their staff vaccinated by the state. Every public school besides one accepted the offer.

DeWine said he has already spoken with the CEO of Cleveland Public Schools Eric Gordon. At the time, the district was in the middle of vaccinating its staff. DeWine suggested halting vaccinations until a return plan became clear. However, Gordon eventually gave DeWine his word the district would do everything in their power to return by the deadline.

While the governor has faced previous backlash from teacher's unions that claim he is using the shot as a "bargaining chip," he said the suggestion to pause vaccinations was not punitive. Rather, if those doses would not be used for their intended purpose, they could then be distributed to Ohio's most vulnerable citizens.

DeWine said that while some students have done just fine in remote education, many others have struggled, which is why getting kids back in the building is so important to his team. He told those districts who seem to be wavering that the commitment they signed was not just to him, but it was a commitment to their community.

"Again, it's not about me, it's about your students," DeWine said.

The governor did say that, overall, he believes his initiative to get kids back to in-person learning has been successful.

At the start of Jan., 47% of Ohio students were in schools that were fully remote. On Tuesday, that number was reported to be less than 15%.

DeWine said that another update on this data would be available in the coming days and could be unveiled as early as Thursday's press conference.

Ohio Department of Aging Direct Ursel McElroy announced a series of virtual town hall sessions aimed at educating the public about COVID-19 and the current vaccines.

McElroy said the goal is to empower community leaders and members so they can incorporate correct information and effective strategies into their local vaccine plans.

For more information, and to watch when these virtual events go live, click here.

Across the board, daily data was below the 21-day average. However, a note on the state's coronavirus website states that the Bureau of Infectious Disease and the Bureau of Statistics are continuing to reconcile death data after the health department recently announced as many as 4,000 deaths went underreported. The ongoing review of the numbers will result in some fluctuations of the death data moving forward.

Hospitalizations have notably continued on a downward trend. On Thursday, there were 1,566 COVID-19 patients in the state's hospitals. On Feb. 4, just 12 days prior, that number was 2,380.