Starting next week, the state will offer vaccinations for employees at businesses, labor unions and other organizations. 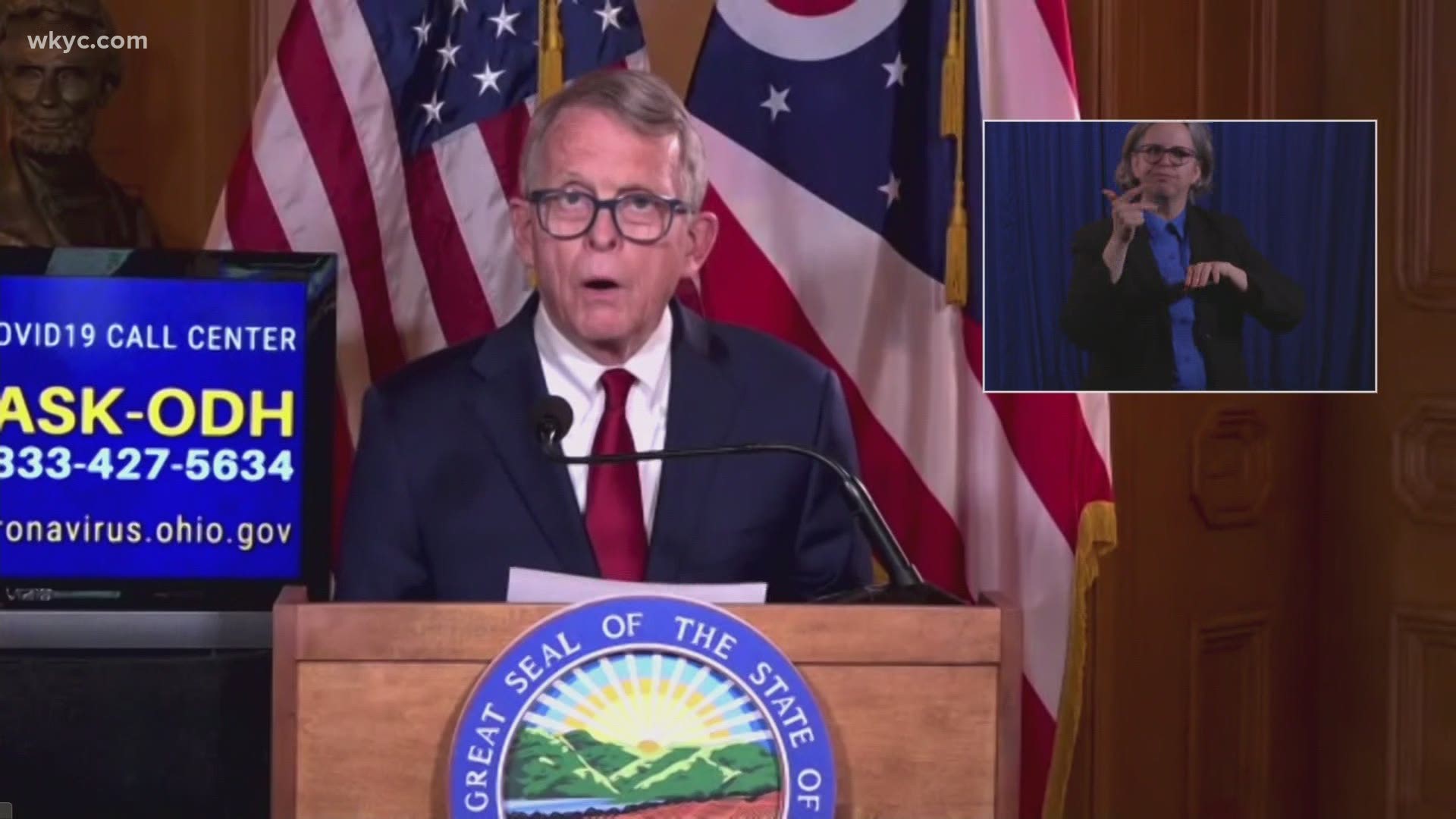 Here's a breakdown of what discussed.

DeWine also encouraged health departments to reach out to local high schools to help set up vaccinations for eligible students who want to be vaccinated. This week, he said the state began to provide vaccines to providers that are partnering with colleges and universities.

As of Thursday, 33.48% of Ohioans were reported to have received at least one dose of the COVID-19 vaccine.

"Ohio and the nation are enduring yet another wave of COVID-19," Ohio Department of Health Chief Medical Officer Dr. Bruce Vanderhoff said.

This time, however, Vanderhoff said the spike is being driven by the new variants of the virus.

The majority of these cases seem to be attributed to the variant first discovered in the UK, formally known as B.1.1.7., which Vanderhoff said is not only more contagious, but research has indicated that it could be more deadly.

In fact, Vanderhoff said he believed that in a matter of weeks, the B.1.1.7. variant could become the dominant COVID-19 strain in the state.

For some perspective into how quickly these variants are spreading, on March 12 Ohio's variant count was at 92. On Thursday, Vanderhoff reported 797 variant cases in the state. This makes for a doubling time of every nine to 10 days, similar to what was seen during the winter surge in the UK.

However, Vanderhoff explained that the surge here in Ohio is happening in a better context than what the UK endured this winter because of the state's successful vaccination effort and a strong track record of masking in public.

Additionally, Vanderhoff said health leaders are receiving increasingly good news about vaccines and their ability to provide immunity that is long-lasting and holds up well against the variants.

"Ohio remains in a very important race against virus and its variants, variants that are more deadly and spread like wildfire," Vanderhoff said. 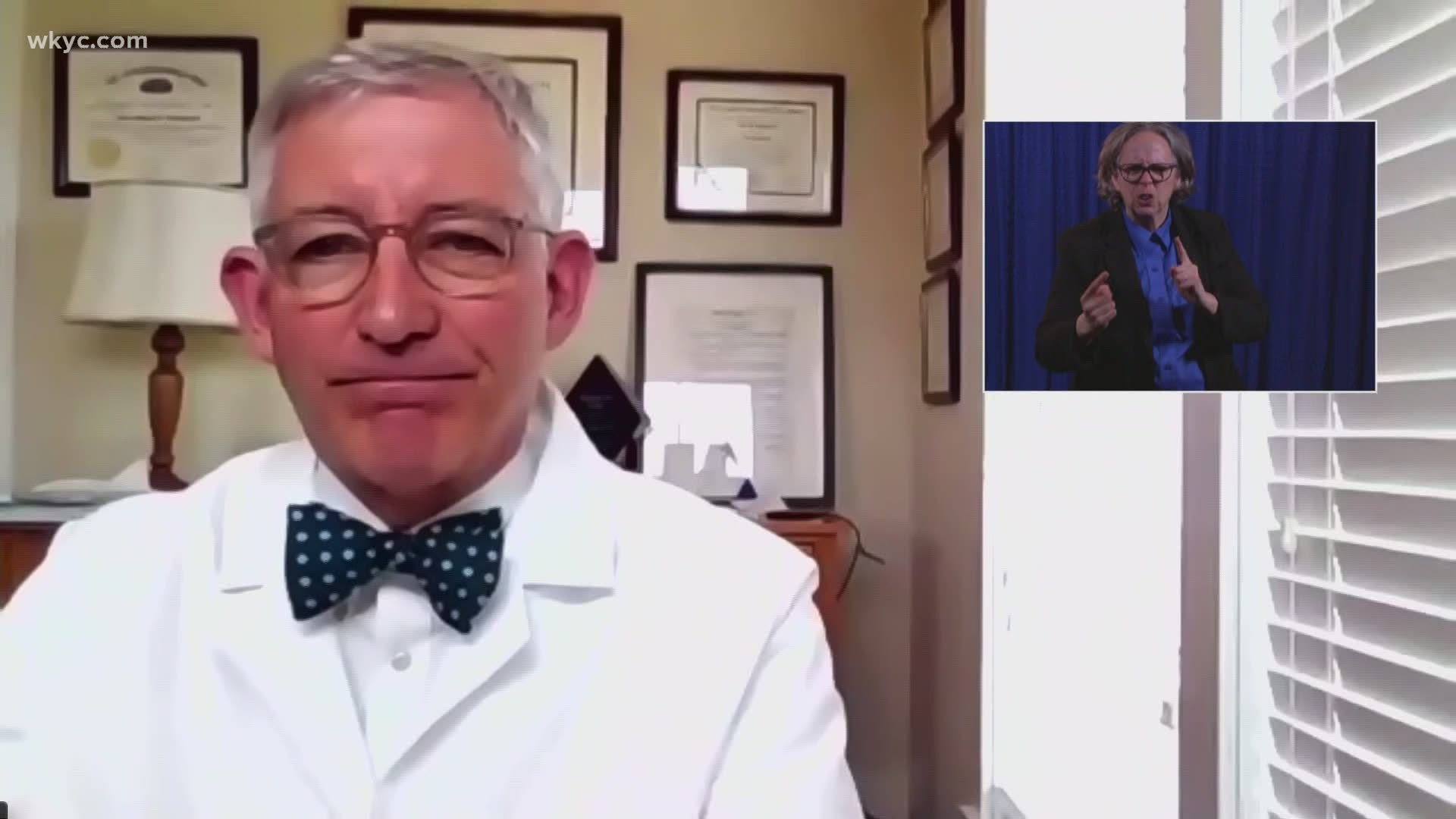 However, he noted that Ohioans can win that race, as long as they don't falter on the basics.

Although the variant count may not look like a large number, Vanderhoff cautioned that what's important isn't that total, rather the trends are what give a more clear picture.

He explained that health leaders are only able to test a subset of all COVID-19 tests that are performed, because the genomic surveillance can only be conducted on PCR tests and there is still a limited number of labs with the capability to monitor for these variants.

The focus on the impacts of the pandemic has mostly stayed on Ohio's oldest citizens. However, Thursday offered insight into how the virus affects children.

"COVID has historically affected older Ohioans more than children. But children aren’t immune to getting sick with COVID, and in some rare cases, they can develop multisystem inflammatory syndrome. This can be a serious complication for children," DeWine said during his recent briefing.

So far in the state, there have been 166 cases of the syndrome.

"This syndrome is unique because it is not associated with an active COVID infection. It usually develops two to four weeks after a child develops a symptomatic or asymptomatic COVID infection," Dr. Dustin Fleck of Dayton Children's Hospital said.

The syndrome is characterized by fever and inflammation throughout the body, usually targeting the heart, but it can also impact the GI system, liver, lungs, kidneys and brain.

Parents are advised to keep an eye out for abdominal pain, vomiting, diarrhea, rash, swelling of hands and feet, as well as redness of the eyes.

On Thursday, the Ohio Department of Health (ODH) reported:

Hospitalization numbers are on the rise. On Thursday, the total number of COVID-19 positive patients in Ohio's hospitals came in at 1,193.

"This is a race. We are in a race, it is a life and death race," DeWine said.

DeWine said previously that when the state hits 50 cases per 100,000 people, all public health orders would be lifted. However, after a stretch of consistent progress, this metric has started to rise once again.

At a county level, the top two in terms of cases per 100,000 people were both in northwest Ohio, with Hancock County in the top spot and Lucas County at No. 2.

Also in the top 20 locally were Ottawa, Putnam, Wood and Erie counties.

DeWine announced Thursday that he would be recommending the General Assembly use a portion of the state's federal COVID-19 relief and recovery dollars to pay off the Unemployment Insurance loan owed to the federal government.

This loan, he said, was caused by the global pandemic. DeWine claimed that paying it off now would free Ohio employers from this burden so they can instead focus on getting employees back to work.

A strong post-pandemic economy directly depends on defeating the virus, DeWine said. As vaccinations in Ohio continue to increase, the governor said there are good signs in the economy.

State revenues are recovering, DeWine said Thursday. This month, Ohio’s tax revenues exceeded the monthly estimate by $41 million, or 2.6%, and remain 4.3% above the estimate for the fiscal year-to-date.

He said that using federal dollars strategically to shore up the state's unemployment system – along with long-term actions to stabilize that system – will continue a strong year of recovery for Ohio.

Ohio Gov. Mike DeWine addressed the state Monday afternoon, providing clarity on health orders as we move into spring and prepare for the resurgence of events that generally garner large crowds.

During his briefing, the governor announced that the Ohio Department of Health (ODH) would be consolidating its health orders, and instead issue a simplified health order that encompasses the key elements of its previous mandates.

The idea, he said, is to underscore the most important parts of COVID-19 mitigation. DeWine described the move as getting "back to the basics," with an emphasis on practices like:

Both DeWine and ODH Director Stephanie McCloud explained that the biggest difference between the new order and previous orders from the health department is that large events and gathers are no longer prohibited.

McCloud went on to detail to Ohioans her guidance for maintaining social distancing while participating in some of these activities where crowds often gather.

"The group you're a part of at an event should not be larger than 10 people," she said. "If you go to a festival, if you go to a parade, try to keep your group ten or smaller and not really congregate with other groups of other sizes."

DeWine made clear that Ohioans' favorite events, like proms, festivals and graduations, can occur, but as with everything over the past year, they will likely be a bit different than usual.

"Those things can take place, we can do anything, but it's how we do it," said DeWine.

Official guidance on proms and graduations is expected no later than Tuesday, he said.

During Monday's press conference, DeWine announced the state's goal to have as many eligible high school students vaccinated against coronavirus as possible before they leave for summer break.

Ohio health leaders are expected to begin an effort to distribute vaccine doses at high schools across the state for students 16 and older who want to get their shot.

Students under 18 would be required to have a permission slip signed by a parent or guardian as a prerequisite to getting vaccinated at school.

DeWine said he spoke with local health departments and encouraged them to reach out to high schools in their area to set up clinics. He noted that some departments have already started to secure doses of the Pfizer vaccine for this purpose.

Currently, Pfizer has the only COVID-19 vaccine option for those 16 and 17 years old. Both Moderna and Johnson & Johnson are only approved for those 18 and older.

DeWine said that if there is a need for extra Pfizer doses that providers are seeing as they try to reach high school students, they should reach out to the state.

During a round of questions with reporters, the governor said that more opportunities for vaccinations without an appointment were likely on the way, although, he gave no specific plans.