The governor rolled out tentative distribution dates for those eligible under Phase 1B of the state's vaccine plan, including seniors and school staff. 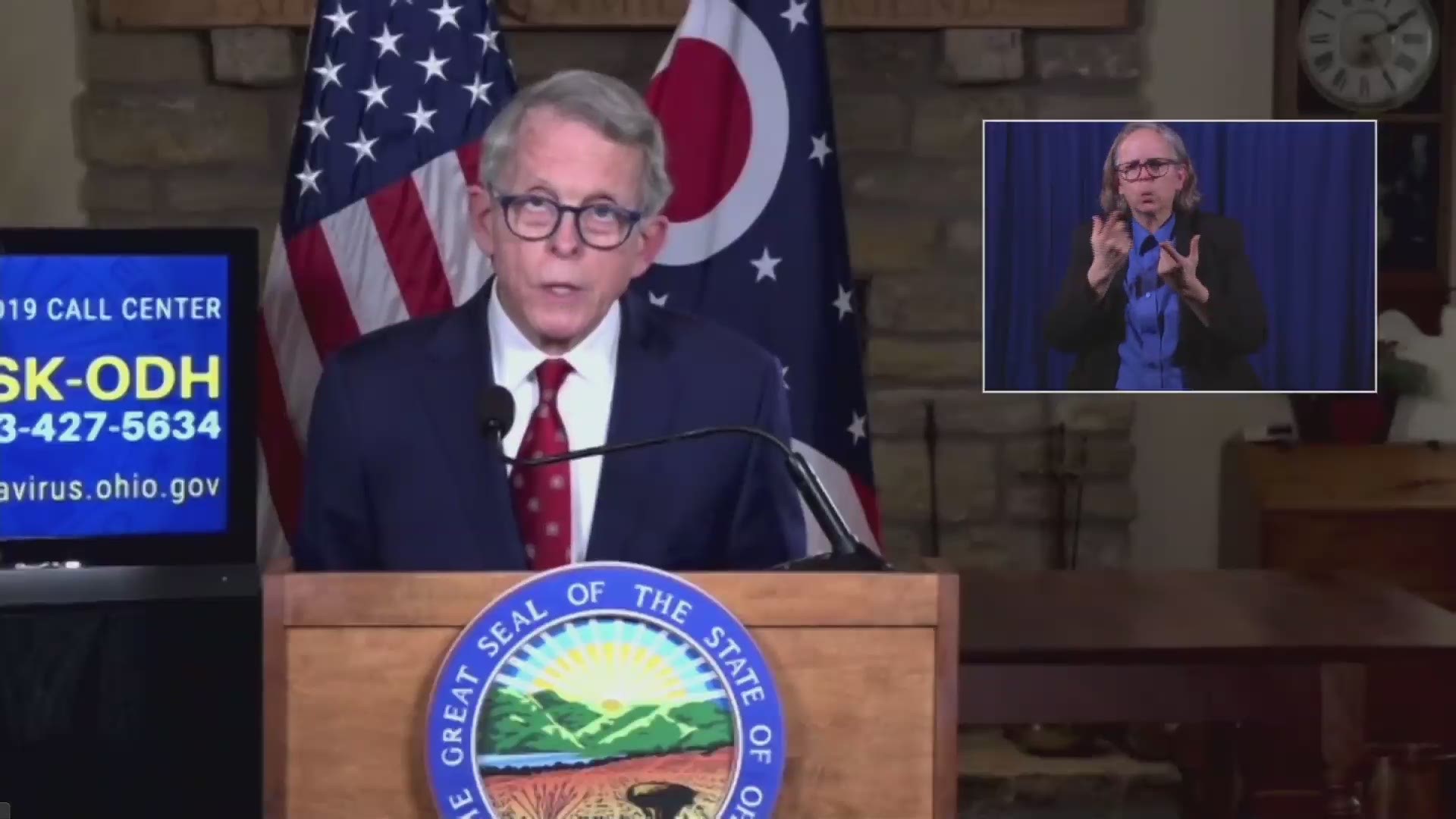 COLUMBUS, Ohio — Ohio Gov. Mike DeWine laid out tentative dates for those eligible under Phase 1B of the state's vaccine plan to receive their doses during Thursday's coronavirus press conference, starting with the state's most elderly citizens.

On Tuesday, Jan. 19, vaccinations will be available for Ohioans 80 and older, the governor said. DeWine reported that these residents, outside of long-term care, constitute up to 420,000 people in the state.

Ohio is anticipated to receive 100,000 doses within that first week.

On Monday, Jan. 11, DeWine said his team will be hosting a webinar for registered providers that outline their expectations and instructions for distribution.

Local Emergency Management Agencies are expected to hold press conferences Wednesday and Thursday of next week to announce where vaccines will be available within their counties, and how people can receive them.

DeWine detailed that some providers may require appointments, some may hold drive-up clinics, or take walk-ins, but regardless of the process, every provider is expected to clearly state how these doses will be administered.

On Jan 25, vaccinations are anticipated to open up to those 75 and older. The following week, it will open to people 70 and older, and on Feb. 8, vaccinations should be made available to Ohioans 65 and older.

However, DeWine made clear that when a new age range opens, it doesn’t mean vaccinations should be complete for the age range prior, reiterating the fact that it will take a number of weeks to distribute.

During the week of Feb. 1, the state will begin vaccinating school personnel.

DeWine said that forms will be sent to schools this week that are to be signed by superintendents, asking them to agree to go back to full in-person or hybrid learning by March. 1. This promise is a condition of receiving the vaccine.

The governor will be asking schools to send the state the number of staff they believe will choose to participate and indicate if they are already in the process of receiving a vaccine.

Younger people with severe congenital, developmental, or early-onset medical disorders that make them particularly vulnerable – such as cerebral palsy; spina bifida; congenital heart disease; type 1 diabetes; inherited metabolic disorders; severe neurologic disorders including epilepsy; severe genetic disorders including Down Syndrome, Fragile X, Prader Willi Syndrome, Turner Syndrome; severe lung disease including cystic fibrosis and severe asthma; sickle cell anemia; and alpha- and beta-thalassemia are eligible for the vaccine under Phase 1B. However, no schedule has been announced for this group.

"We will announce, in the coming days how those individuals will be able to receive their vaccinations if they choose. We're not announcing that today, but we will," DeWine said.

A new tool will be launched next Thursday on the state's coronavirus website, allowing people to see who is distributing vaccinations in their counties and to what group.

DeWine explained that vaccines from the manufacturer are usually delivered on Monday through Wednesday each week. It is expected that providers will be able to distribute their doses the day after they are received.

On Thursday, ODH reported the following:

Three northwest Ohio counties were in the Top 20 of the state's list of those with the most coronavirus cases per 100,000 people to the least.

Those northwest Ohio counties include:

However, all states in the county remain well past the threshold of 100, put forth by the Centers for Disease Control and Prevention.

While not related to the pandemic, DeWine did address Wednesday's breach on the U.S. Capitol building.

The governor went on to directly condemn President Donald Trump for his ongoing claims of election fraud.

"President Trump's continued refusal to accept the election results, without producing credible evidence of a rigged election has started a fire that has threatened to burn down our democracy," he said.

You can watch DeWine's full statement in the player below:

Here's a breakdown of what was discussed at DeWine's previous press conference Tuesday.

Ohio Gov. Mike DeWine said Tuesday afternoon that specific details regarding Phase 1B of the state's coronavirus vaccine distribution vaccine could be expected in the coming days.

The governor provided insight on the decision-making process behind the groups chosen for the next stage in the process, as he has faced criticism over those left out of this next round.

While some groups are fighting for their spot in line, the governor noted a trend among nursing home staff turning down the vaccine.

Here's a breakdown of what was discussed during Tuesday's press conference.

DeWine reiterated what his goals are for Phases 1A and 1B in the state's vaccine distribution plan, which are to:

DeWine said that roughly 1 million people are in the 1a group. However, he noted that doesn't necessarily mean they all will want the vaccine.

While some of 1A will be finished next week or the week following, other aspects will continue on as 1B begins, DeWine said.

While no date has been set for Phase 1B to begin, the governor said the goal is for it to kick off in two weeks.

Among those getting the vaccine during Phase 1B are:

The state reports an estimated 2 million Ohioans in the vaccine's next phase of distribution.

The governor came right of the gate Tuesday addressing criticism over those included - and more specifically not included - in the coming phase.

"I am very disappointed that the @OHdeptofhealth has determined that law enforcement officers do not qualify for the vaccines provided by the CDC for COVID-19 phase 1A. These front line officers are on the street day and night serving and deserve better."

"We certainly understand the position of law enforcement. They are putting their lives at risk every day. We understand their point and we don't want to diminish it. But if we are going to put people at the front of the line, a 35-year-old probably shouldn't go ahead of an 85-year-old woman with comorbidities."

In defense of the state's current Phase 1B plan, DeWine explained that deaths in the state have been the greatest in the older citizens of Ohio.

In addition to the elderly being at high risk, DeWine said that there were roughly 75,000 other people in Ohio under the age of 65 who are at high risk due to a medical condition who will be included in Phase 1B.

Saving lives is top priority, however, the state has put getting children back to in-person learning right up there alongside protecting the most vulnerable.

While an exact number isn't known, DeWine said there's an estimated 300,000 staff in Ohio's K-12 schools. He previously stated that he believes staff vaccination is a key step in getting Ohio students back into classrooms.

DeWine said that there is no specific plan in place for distribution among these groups just yet, but said more details, including an exact start date, should be on the way in the coming days.

The governor did provide some vague insight into what the plan may look like, however. He said distribution will likely be a combination of people going to their primary care doctor and showing up to large places like fairgrounds with no appointment needed.

DeWine said that as of Sunday, 61% of the state's nursing homes received their first doses of the shot, saying that everyone who wanted the vaccine at those facilities was able to do so.

By the end of this week, he said that number is expected to jump up to 80%, with most of them complete a week after that.

While 75% - 80% of nursing home residents offered the vaccine have taken it so far, only 40% of staff have signed on this first time around.

Ohio Department of Aging Director Ursel McElroy said she believes education is what will give Ohioans the confidence to get vaccinated. Tuesday she laid out a plan for her department to provide necessary information to staff in nursing homes across the state, in the hopes of encouraging them to get the COVID-19 vaccine.

On Tuesday, the Ohio Department of Health reported:

ODH Chief Medical Officer Bruce Vanderhoff said Tuesday that he has noted some "concerning signs" in the state's data over the last few days.

Testing positivity is climbing and hospitalizations are on an upswing after previously dropping at the start of the holidays.

He said total state hospitalizations dropped from 4,400 on Christmas to 4,000 on New Year's Day. However, that number has jumped up back above 4,400 in just a few day's time.

For perspective, Vanderhoff said that on Oct. 1, there were 650 patients in Ohio hospitals, jumping to 1,500 on Nov. 1 and up to the numbers we are seeing now. This means the current number is three times what it was from Nov. and nearly seven times from the start of Oct.

He explained that the city's emergency measure illustrates the fact that Ohio's hospitals are extremely busy out of the holidays, noting that there hasn't been enough time to see the true impact recent holiday celebrations may have.

Vanderhoff said Tuesday it is normal for any virus to change over time through the process of mutation, noting that most are not important, do not change the virus's behavior and many even disappear.

The new variant first discovered in the UK, B117, is notable, however, because he said it appears to be more contagious than other variants of the virus. Vanderhoff said that that fact is worrisome as it could lead to more people getting sick.

The good news is, Vanderhoff explained, is that this variant doesn't appear to be more severe or to impact people who are already immune. He expressed confidence in the vaccine's ability to cover this strain of the virus as well.

The bottom line, Vanderhoff said, is that this variant doesn't change what we have to do, but it underlines the importance of what is asked of all Ohioans: wash your hands, keep your distance, wear a mask and get the vaccine if you are able.

Vanderhoff confirmed that the UK variant is in the United States and said that it will undoubtedly soon reach Ohio, too.