A statewide rise in COVID-19 cases has caused increased concern for healthcare workers. 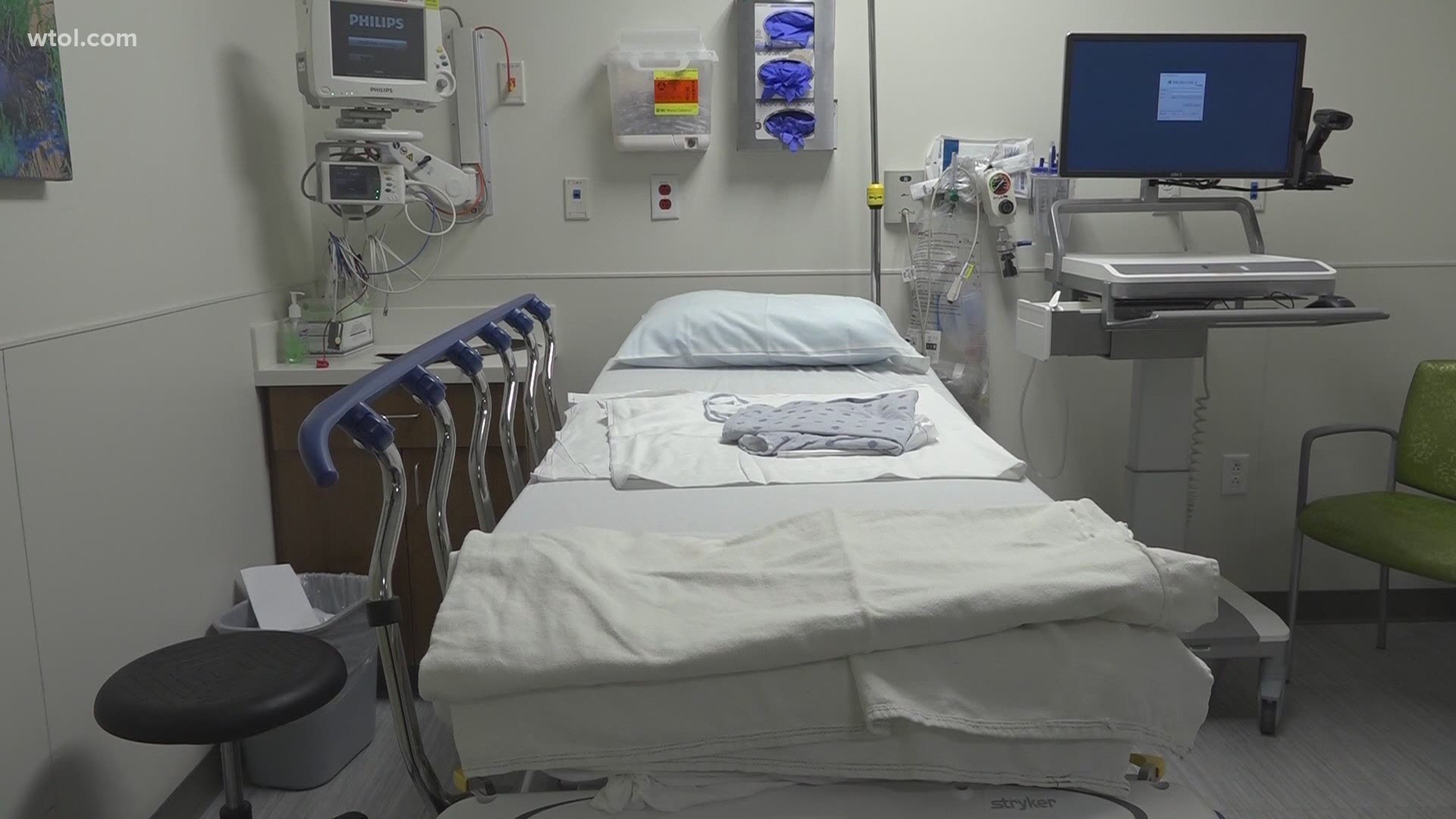 TOLEDO, Ohio — As COVID-19 cases and hospitalizations increase across the state of Ohio, Lucas County health leaders have a growing concern about the impact it could have on hospital staff.

Early on in the pandemic, the worry was focused on the number of beds available. However, according to ProMedica Vice President of Patient Quality and Safety Dr. Brian Kaminski, so far, Ohio has never reached its hospital capacity and is currently in good shape in that regard.

Now, as we find ourselves reaching a new spike in cases, leaders have shifted focus to staffing levels, as a small number of healthcare workers begin to fall ill.

During a press conference on Thursday, Mercy Health-Toledo Chief Clinical Officer Dr. Kevin Casey said these workers most commonly are not contracting COVID-19 at work. They are, more often than not, being exposed while out in the community.

While the number of impacted staff has remained relatively low, already, hospital executives have had to share resources to effectively provide care. Casey said that the number of sick workers hasn't been so bad that it has impacted the quality of care patients receive, but "we need to be careful."

"A single caregiver ill can impact the ability to care for 10 people," he said.

As more cases increase in the community, Casey said he worries that more healthcare workers will begin to test positive as well.

Health officials are urging Lucas County residents to take the virus seriously by continuing to follow health and safety guidelines like wearing a mask, maintaining six feet of distance and frequently washing hands. These practices seem to be working well in formal situations, but when it comes to informal, personal gatherings, people are letting their guards down.

Leaders at the state and local level have repeatedly reported that spread most commonly occurs at large private gatherings. People should be reminded to keep these safeguards up when they are around those who don't live in their house, regardless of their relationship.

St. Luke's Chief Nursing Officer Jill Trosin said that symptoms are most commonly seen anywhere from two to 14 days after exposure. They may include:

Trosin urged residents to not ignore any symptoms. The virus can be spread by those who may be unaware of their own exposure.

If you are sick, don't go to work, she said. You run the risk of infecting others. Instead, seek help and take care of yourself while minimizing the risk of exposure to other people.

Casey went a step further, saying that you may be exposing others to the virus before you develop symptoms.

"There's a responsibility that we have as members of a community to try not to pass on this infection. Unlike the flu or other infections where you start to feel ill about the time you become infectious, COVID doesn't appear to be that way. It appears you can transmit the disease, long before, days before you feel ill," he said.

Trosin noted that people have begun to back off from the basics and have started to group up again as doctors continue to see COVID-19 cases spike across the state. She said that if you have to be in any kind of group, you should limit the number of people there and keep up that six feet of physical distance. Prevention methods like this protect both you and the people around you, she explained.

Casey acknowledged that distancing is hard and that health experts don't want people to be socially isolated. The emphasis is on keeping physical distance while maintaining social interactions.

He said that the longer COVID-19 has been around, the more pressing it has been for people. Depression and suicide attempts are up, he said, which is a big concern. The question then becomes, "How do we take care of our people?"

When the weather was nice, Casey said, we could get outside, but now the weather is getting less hospitable for outdoor events. He maintained the importance of reaching out to friends and family members in a responsible way, saying the virus doesn't appear to be leaving us soon and noting that it will "probably get worse before it gets better," a sentiment shared by all health leaders at Thursday's conference.

However, as long as their workers can stay healthy, there is a strong consensus that Lucas County's hospitals are prepared to take on the winter.

"As unfortunate as it is, we're prepared from a supply and readiness approach. We just need to make sure that we have the people who are both physically and emotionally capable of caring for those both with and without COVID," Casey said.