COVID-19: Changing Our Lives | March 25: Revisiting a past pandemic

The Spanish flu ravaged Toledo and the rest of the world in 1918, killing some of its victims within hours of symptoms first appearing. 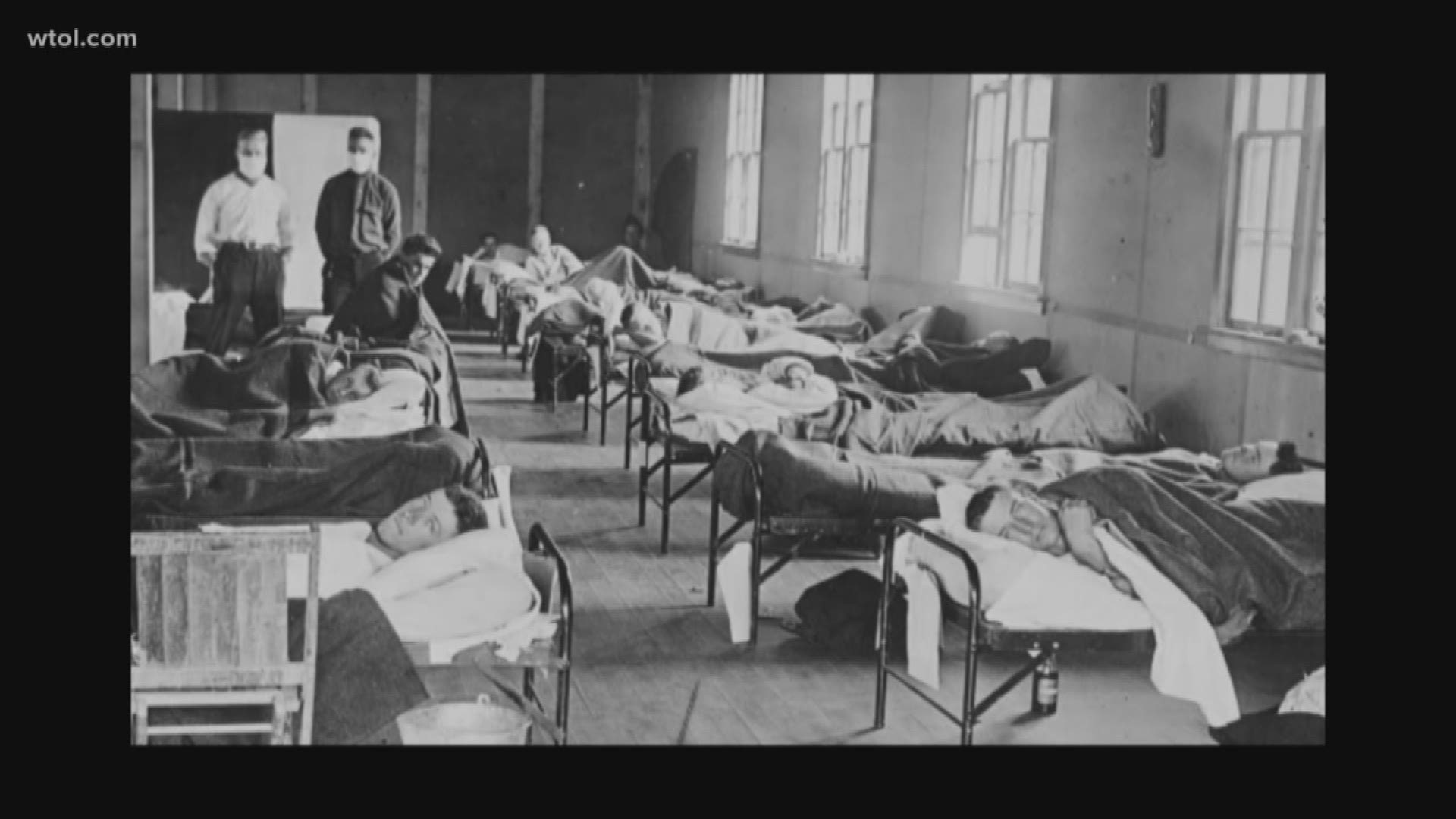 TOLEDO, Ohio — It's Day 10 of social distancing for me and my family, and so far I haven't gone stark-raving mad.

In fact, it's given me even more time to pursue my passion for history research and writing. And one of questions I've been exploring in my armchair time travel was how earlier generations of Toledo were handling the great Spanish Flu epidemic of 1918. So, I thought I'd share a little of what I learned.

First, to put this pandemic in context of its era, one must keep in mind that the world was also engulfed during these years in the grip of the first World War. Europe was at war with itself, and the United States was standing by as mere observers for the most part, keeping watch on the daily developments and news of the brutality of man's mechanized belligerence and hatred.

Here at home, the automobile was gaining favor with most families, but it still was sharing some streets with the horse and wagon. There was no radio as we know it, no broadcast radio stations, and, of course, no TV. So the main mass communication medium was the newspaper; The Toledo News Bee, the Toledo Blade and Toledo Times.The largest public schools were Scott and Waite.

The University of Toledo was a building near downtown and not on Bancroft.   The hospitals were St. Vincent and Mercy. However, medicine in 1918 was crude by today's standards and modern antibiotics were not yet invented. Getting sick was commonly an adventure of survival. Small pox, diphtheria, and typhoid fever were still an issue in many communities.

By 1918, the United States had entered the war, and American boys (known as the Sammies) were being deployed to camps for training and then being sent to the trenches of Europe. In the spring of 1918, it's believed that US soldiers from Kansas were the main carriers of the new influenza strain, and it was relatively mild but contagious and infected thousands of troops in Europe.

There was no mention of this in the newspapers of Toledo at the time, and from all news accounts I could find, during this first wave of the virus in the Spring of 1918, life went on as usual throughout the Toledo area.

As troops in Europe were being stricken, there was no word of it in the newspapers, for it was forbidden by the War Department for papers to print anything that might indicate that the American, British, or French forces were weakened by an illness. So the public was largely unaware.

But by fall of 1918, the second wave of the flu surfaced and all over the country, civilians and soldiers alike were being afflicted by this flu. The death rate was devastating - around 3% in many areas, but reported as high as 10% in others.

On Sept. 17th, 1918, the Toledo News Bee ran a very short article about many unconfirmed reports of the Spanish flu in Toledo. It stated: "We Have The Influence With Us" and continued by saying that the same virus had run its course through Toledo in the spring but now had returned.

The city had no idea how many cases it had because it was not considered a reportable disease. It did say there had been no deaths. That was the first media acknowledgment of the epidemic in Toledo, although it had been reported earlier in Eastern cities of the United States.

Two days later, on September 19, a headline appeared that offered a warning to Toledo residents to take precautions against getting the virus because it was highly contagious and was known to cause pneumonia and could be lethal.

As to where it came from, there were many theories. A story in the News Bee suggested that the German Army may have developed it and spread it to the world through the use of torpedoes from their U-boats. However, because it was named the "Spanish" flu, most assumed it came from Spain, but that was a misnomer because Spain, a neutral nation, was the only country that was reporting on it initially in the spring of 1918. They were under no restrictions about reporting on it, thus it was dubbed Spanish Flu.

Within weeks, the story of the influenza epidemic took on a life of its own as Toledo and other cities began to cope with a sharply increasing number of cases, many of them fatal. Even the daily casualty reports from the war front began to reveal a disturbing number of soldier deaths from this disease. Training camps like Camp Custer near Detroit and Camp Sherman located south of Columbus were reporting high numbers of flu cases among the soldiers and some deaths. The total number of soldiers infected in the US was reported to be 29,000 by the end of September 1918. It would only get worse. Much worse.

In October, Toledo began enlisting women who wanted to volunteer as nurses to help those afflicted because hospital were running short of beds and staff. They would be used to give baths and make beds. Some schools began to close in Ohio as the wave of flu cases gained momentum.

One national newspaper article advised people "How to avoid getting the flu" - by staying away from others, washing hands, keeping your feet dry, not touching your mouth, and to stop spitting in public places, to name a few. Not much different than what we are hearing today from the medical experts on COVID-19.

The first Spanish flu fatality I found involving a US soldier in Toledo was John Marcum of Western Avenue. He died at Camp Sherman in Chillicothe. A day later, Camp Sherman reported 52 more death of soldiers from Ohio. In Cincinnati, all schools, theaters, churches and public events were ordered shut down to stop the spread of the virus.

In Toledo, however, patriotism won out over pandemic concerns as Mayor Cornell Schreiber urged all Toledoans to attend an upcoming Liberty Loan rally in downtown Toledo in front of the Lucas County Courthouse. This came as the city's health department reported that four more Toledo residents had died from the flu that week and 10 more cases were confirmed. Schreiber, however, says he was not concerned and thought the situation was getting better in Toledo. "No need" to close schools or other public venues in Toledo.

In the meantime, the city health department reported another 40 cases in the days ahead, with many deaths. All public funerals in Toledo were banned. Two days later, Mayor Schreiber changed his mind and ordered all saloons, theaters, poolrooms, dance halls, libraries, schools and churches closed. Toledoans were on notice not to mingle.

By the middle of October 1918, Toledo's newspapers were filled with stories of people who had died from the flu or pneumonia. It seemed that no age group was spared. Even the young and healthy were not exempt from the microbial invader. Another plea was made for nurse volunteers to augment the already overworked health care workers of the city. By October 19, another 570 new cases of the flu were reported in the city. The influenza was ravaging Toledo and the region. The Spanish flu often struck so suddenly that many victims died within hours of its onset, others died a day or two later.

At this point, there were more than 3,000 cases and 86 deaths in Toledo. And there were many others throughout Northwest Ohio. This did not include the soldiers being shipped home to Toledo in pine coffins from training camps at home or from the front in Europe.

As time marched through November, the Allied armies were marching across Europe to an inevitable victory over the Germans.

There was also a feeling of victory against the Spanish flu. Restrictions on most public gatherings were being lifted and health experts in Toledo felt they had passed the worst of the crisis. There was hope that life would start to return to normal, and that Toledo young warriors would soon return home. But the flu had taken a heavy toll in Toledo, and while it had abated somewhat, it was far from over. On November 11, Armistice Day itself, with jubilant celebrations throughout the city, over 6,000 total cases were reported in the city and about 400 deaths from the flu and pneumonia had been tallied.

The city was still recording about 20 deaths a day. Because of the flu dangers, the mayor ordered the saloons to be closed at noon on Armistice Day and to stay closed for 24 hours. It's thought by some experts that the celebrations of that day and the gatherings of people probably contributed to a smaller "third" wave of the disease.

While life had returned to near normal in December, there were still warnings that the influenza had not gone away and might return as the mercury plummeted during the cold winter months. Flu deaths had tapered off, but for all of 1918, the health department reported over 1,000 deaths from the flu and flu-related pneumonia. In the Toledo area, some 30,000 people were believed to have contracted it. In other cities, death tolls were equally as horrific, if not worse.

Concerns that 1919 would see a return of the flu to Toledo fortunately did not come to fruition. The newspapers during those winter months were no longer littered with the scattering of "flu" stories and all appeared to be well.  When the history of the epidemic was written, it was agreed by researchers that some 600,000 people in the United States died during the scourge. Millions of others managed to survive it. There was hardly a family in America that wasn't in some way touched by it. In the fall of 1918, more than 300,000 soldiers had contracted the flu and some 20,000 troops were killed by its deadly effects and complications.

I'm not sure how many lessons we can learn from this earlier epidemic of the Spanish flu, but if nothing else, it provides a sobering glimpse of just how the world, the nation, and our city were caught in the same snare of a fast-moving viral invasion and the deadly consequences that resulted.

NEWS OF THE DAY

We want to hear your stories. Send them to us at blog@wtol.com. Maybe it's how you are feeling or something fun your family is doing to pass the time. Send us your photos and videos.

RELATED: Impacted by statewide closures? Here are some resources that can help

WTOL 11’s coverage of the coronavirus is rooted in Facts, not Fear. Visit https://www.wtol.com/coronavirus-covid-19 for comprehensive coverage, find out what you need to know about northwest Ohio and southeast Michigan specifically, learn more about the symptoms, and keep tabs on the cases around the world here. Have a question? Text it to us at 419-248-1100.