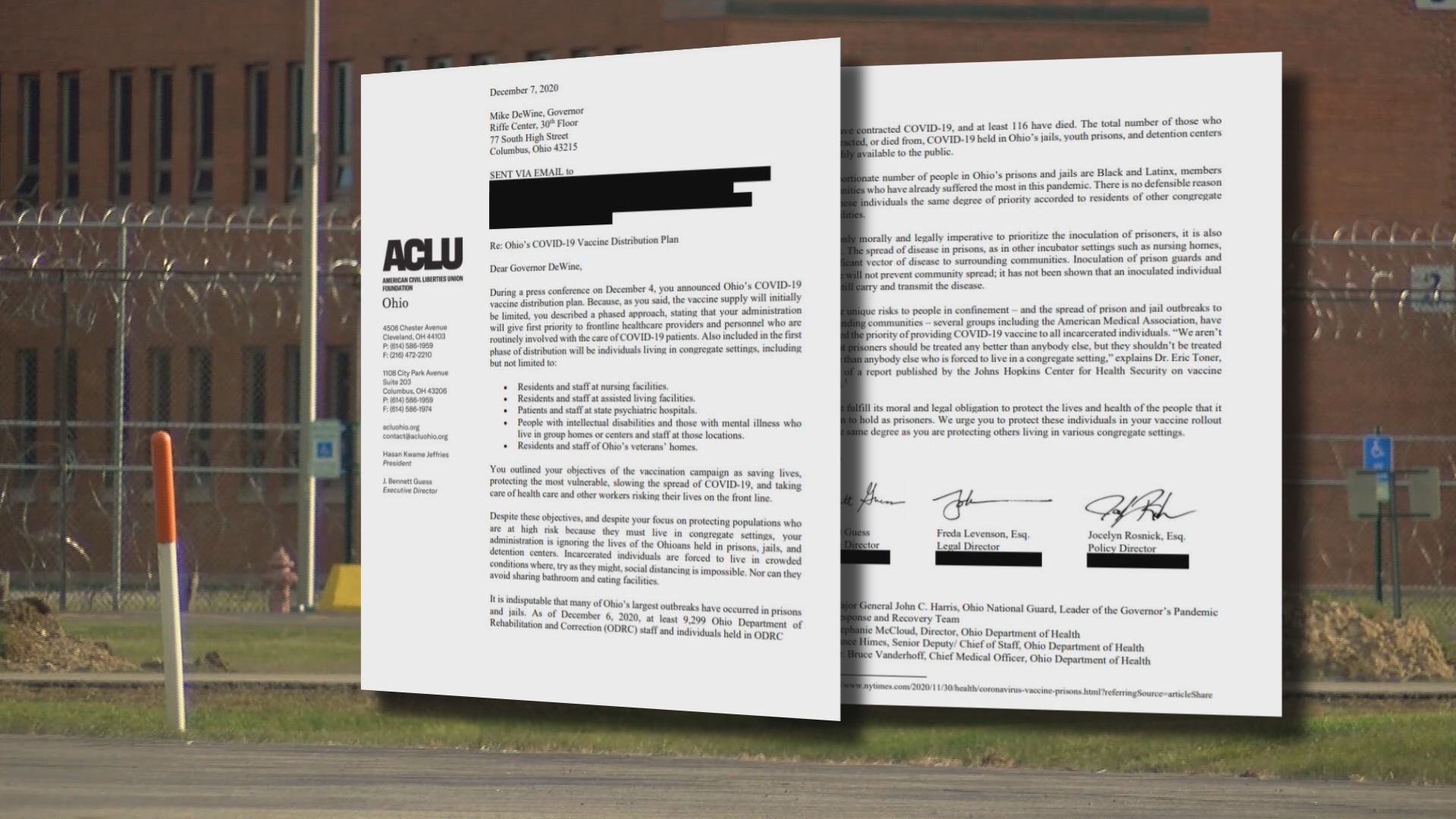 TOLEDO, Ohio — As frontline workers now begin getting vaccinated, there's a push underway to move prisoners up on the priority list.

The American Civil Liberties Union of Ohio is making a plea to Gov. Mike DeWine: vaccinate people behind bars for the sake of morals and public health.

"They have underlying chronic health conditions in disproportionate amounts. They tend to be elderly to a surprising degree," said Freda Levenson, the legal director at the ACLU of Ohio. "And the environment that they live in poses even greater risks than conditions in nursing homes and long-term care facilities."

In a Dec. 7th letter, the ACLU said it's imperative to immunize inmates.

It echoes a call from the American Medical Association, which says because of the high risk among prisoners, the group is advocating for priority access to vaccines.

"Prisons are tinderboxes for infectious disease," Levenson said. "And prisons and jails incubate and cede the virus back into the general community."

"Once the virus gets in, it spreads like wildfire in these facilities and they should be considered a particularly vulnerable population," said Adams.

It's a concern for ProMedica Dr. Brian Kaminski, too. While he wouldn't single out any specific group of people, Kaminski argued the vaccines should go to those who are at the highest risk.

"The idea here is to reach the vaccine to the individuals that need it, regardless of where they are in our society," he said. "Not just to protect that individual but to protect the community from spread of that disease."

Johns Hopkins' Center for Health Security recommended incarcerated people and prison workers fall under the second tier of those who get vaccinated.

But not everyone agrees.

This is not a partisan issue. In fact, I am in agreement with Colorado’s Democrat Governor, and I have no doubt Ohio will be the same.

Quite simply, prisoners should not be given the opportunity to receive a COVID-19 vaccine before free Ohioans. Period.https://t.co/KmhnXe4fo3

Gavarone did not answer WTOL 11's request for an interview on the matter.

When asked for an answer about how she can justify inmates being among the first to receive a COVID-19 vaccine, Levenson said, "The response is that they're being punished for their crime by being incarcerated.

"They did not receive death sentences."

The ACLU tells WTOL 11 the governor has acknowledged the group's letter but has not yet responded.