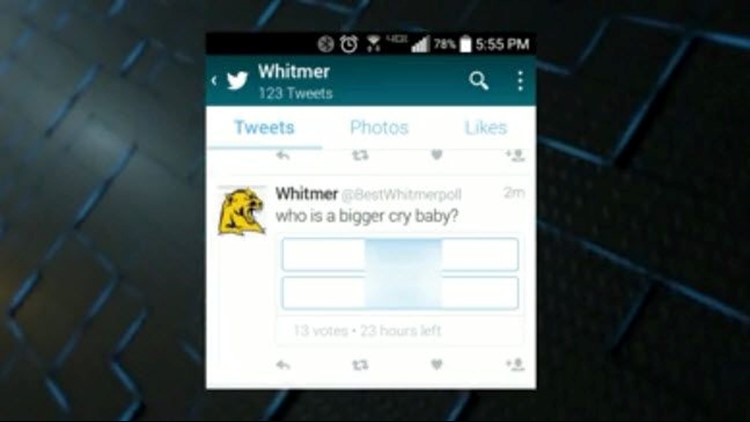 Christina Yates-Lillie has a niece who attends Whitmer and she says the tweets posted about her were disturbing.

"There was comments being made about her on this twitter page that were not nice," said Yates-Lillie.

She says she was disgusted when her niece brought the page to her attention, and she immediately reported the page to the school.

"Just seeing that this is what we as parents have produced so far is very disturbing," she said.

The school district has since put a message on their website and social media platforms, saying that steps have been taken with authorities to determine who created the accounts and that they are a violation of the district's anti-harassment board policy.

Yates-Lillie says the school also told her that they were working with their director of technology to see what could be done. But her concern is that the bullying isn't just happening online.

"Just because it happened online, does not mean it didn't carry over to school. So we need to make sure that those students are remaining safe and comfortable and not being harassed at school. And then as information surfaces, that information is used appropriately and can stop further instances of this," she said.

The district is also asking parents to report any inappropriate social media accounts like this, so they can take the appropriate action to keep all the students safe.