The infants - a male and female - were found years apart in 2 separate cars. The details were disclosed in court documents in the Cisneros case. 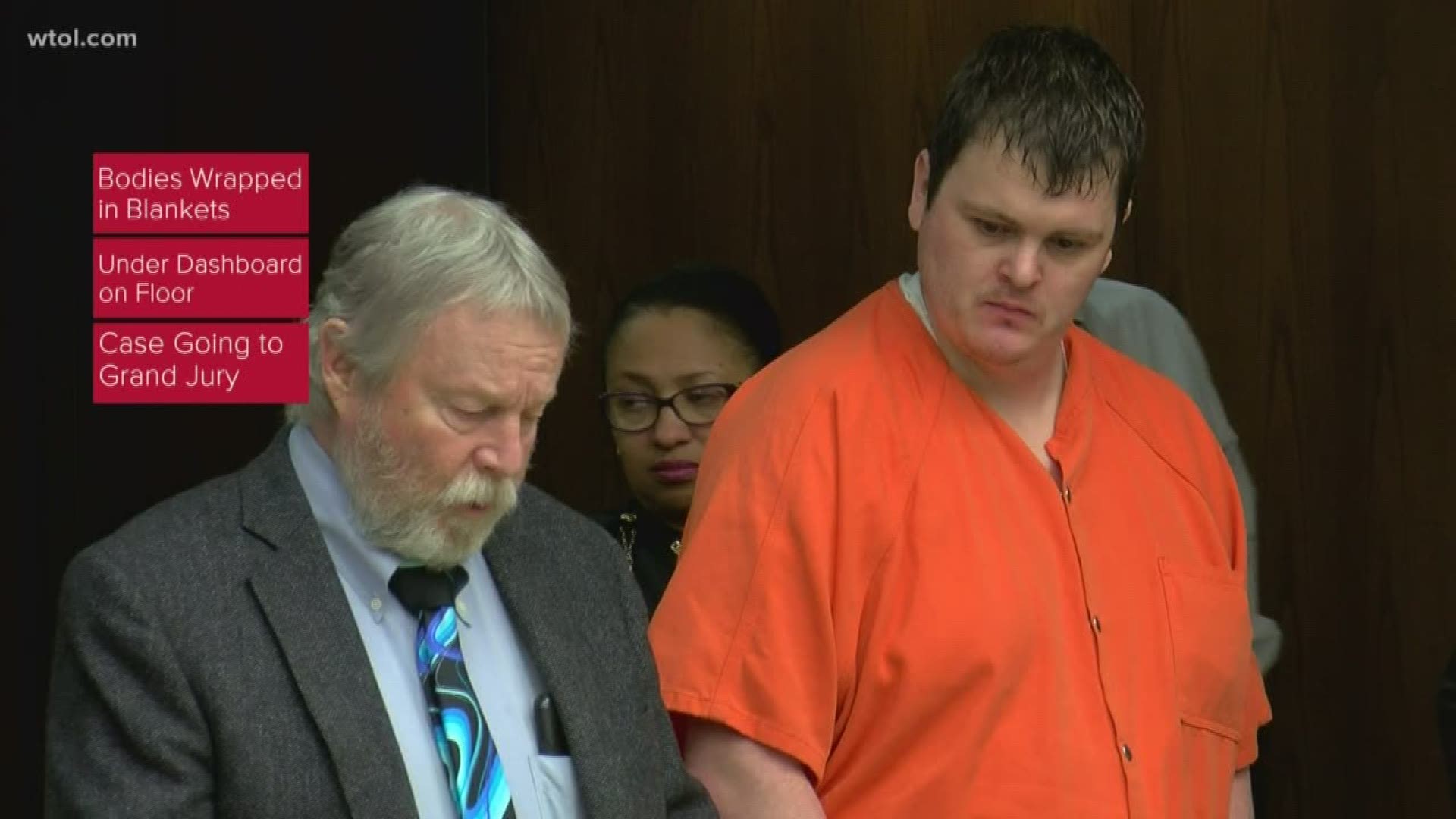 TOLEDO, Ohio — The parents of "Baby Doe," a deceased infant discovered back in 2017, were indicted by a grand jury on Thursday.

Jacob and Jenna Cisneros were indicted on two counts each of involuntary manslaughter, endangering children, tampering with evidence and obstruction of justice.

Two babies, found years apart inside two vehicles, shared similar details in the discovery of their remains. According to an affidavit in the case against Jacob and Jenna Cisneros, parents of the male "Baby Doe" discovered in 2017, the bodies of both babies were found wrapped up in blankets and discovered on the floor of the cars, under the dashboards.

Baby Boy Doe, discovered inside a 1988 blue Ford Mustang outside a house in the 2400 block of Vaness Drive in 2017, was described as between 2 months and 4 months old at the time of his death. He was clothed and "wrapped in a blanket before being stuffed under the dashboard on the floor of the vehicle."

DNA tests showed the boy to be the son of Jacob and Jenna Cisneros, 33 and 34, respectively. The pair were arrested and charged with involuntary manslaughter and endangering children in the death of Baby Boy Doe on Feb. 3.

Credit: Toledo Police
The body of Baby Doe was found abandoned in a blue Mustang wearing these clothes in May 2017. The baby's body, which was found decomposing, has remained in the Lucas County morgue since.

RELATED: Toledo police arrest parents of baby found dead in a car in 2017

Those charges subsequently were dismissed after the discovery of a second dead baby - a girl - inside a car registered to Jacob Cisneros. A Lucas County grand jury now is expected to indict the couple.

As part of the Baby Boy Doe investigation, a search warrant was issued for the Cisneros residence in the 300 block of South Reynolds Road. The investigation then turned to a car registered to Jacob Cisneros.

On Friday, an orange PT Cruiser belonging to Jacob was towed by investigators from a location on Walnut Circle. On Monday, a search warrant was executed on the vehicle and "inside, on the floor under the dashboard, another dead infant was located. The infant was decomposed but appeared to be newborn and wrapped in several towels and blankets as well as a floral patterned fitted sheet," court documents said.

Facebook posts made by Jenna Cisneros indicate that she gave birth to a daughter around the time she and her husband lived in an apartment near Walnut Circle, records show. A search through vital statistics records in Ohio, Michigan, Indiana and Colorado returned no record of Jenna Cisneros giving birth to either child at any hospital, the court affidavit shows.

"Based on the way both infants had been swaddled in blankets/household items, it appears likely that they were delivered in a residential setting," the affidavit states. "It is further believed that the Cisneros residence may contain  evidence of one or both births on their furniture or other household items."

The search warrant also indicated that other items were taken from the Cisneros residence in an attempt to establish if an infant had been born in the home.

The Cisnero couple has three other children, and family members are caring for them. Lucas County Children's Services is involved.

Reactions from people who knew the couple continues to be that of shock and surprise. Tom Schwartz, a pastor at Christ Presbyterian Church in Toledo told WTOL 11 that the Cisneros' have been attending the church since 2017 and Jenna had just been elected to be a deacon.

"The nominating committee [in January] decided that she was somebody they thought would be good and caring for others. She hadn't started that work with us at that point, but she was certainly seen as somebody who could be caring towards other people which is the reason why we select people to serve in that capacity."

Police are asking for tips in both cases. Anyone with information is asked to call Crime Stoppers at 419-255-1111.