The TBI said the student shot at officers responding to reports of an armed male at the school, and an officer returned fire -- hitting and killing the student. 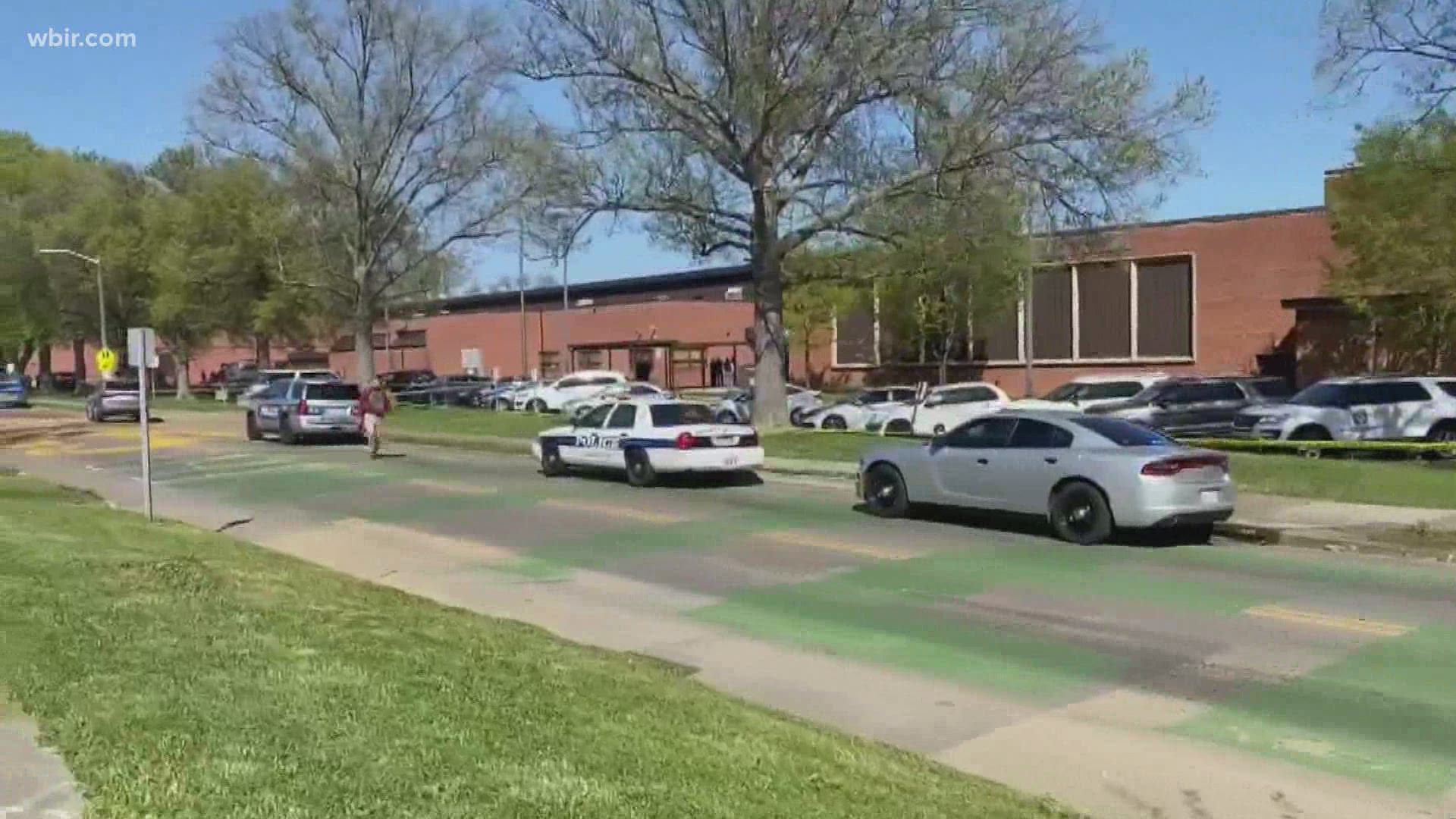 KNOXVILLE, Tenn. — The Knoxville Police Department and Tennessee Bureau of Investigation said one student was killed and a KPD officer was wounded during at shooting at Austin-East Magnet High School on Monday afternoon.

The TBI did not describe the incident as a school shooting, but as an officer-involved shooting that occurred inside the school after police arrived.

KPD said officers were called to the school around 3:15 p.m. on reports of a "male subject who was possibly armed in the school." The response occurred after recent shootings in the community that claimed the lives of teens who attended or formerly attended Austin-East.

TBI Director David Rausch, who formerly served as Knoxville's police chief, said officers located the suspect inside a bathroom at the school, saying he was a student.

When officers approached the student, the TBI said he shot at the responding officers -- hitting one. Rausch said an officer returned fire, hitting the student.

The student was later pronounced dead at the scene.

The KPD officer, who was shot in the leg, was identified Tuesday as Adam Wilson, a 20-year veteran with KPD and currently serving as A-E's school resource officer.

Wilson was taken to the University of Tennessee Medical Center where he was recovering from surgery on Tuesday morning.

KPD Officer Adam Willson is recovering from surgery after being wounded in yesterday’s shooting incident at Austin-East Magnet High School. Willson, a 20-year veteran of KPD, was currently serving as the School Resource Officer at Austin-East. We are grateful for the well wishes. pic.twitter.com/wDcBGnxT9d

“It was just very chilling," KPD Chief Eve Thomas said. "First of all to hear that we have an officer down, second of all that it was at a school. It’s a sad day for the Knoxville Police Department and for our community.”

Knoxville Mayor Indya Kincannon said she'd spoken with the officer and he was conscious and in good spirits. She said she thanked him for putting himself in danger to keep students safe, and he responded that he'd rather be hurt than anyone else.

KPD detained one other person for further investigation.

There are no other known gunshot victims, KPD said. Authorities are not identifying the officer or student at this point.

TBI and KPD said at this point investigators are unable to provide details about the gun or how the student was able to bring it into the school.

"It’s a sad day. It’s unfortunate, these are the days that you don’t ever want to get this phone call. Because of my connection, it was important for me to be here. I wanted to come by and let folks know a couple things, we we will gather facts and present those facts in any capacity we are called to handle," Rausch said.

Multiple agencies are on the scene of a shooting at Austin-East Magnet High School. Multiple gunshot victims reported, including a KPD officer. The investigation remains active at this time. Please avoid the area. pic.twitter.com/ViQirnQSpx

A tragic situation unfolded at Austin-East Magnet High School today. We mourn the loss of life and commend law enforcement for their rapid response. We offer our full support to @TBI as they investigate this situation further.

Knox County Mayor Glenn Jacobs said in a statement he is "as troubled and frustrated about this as everyone else."

"I want to thank the officer for risking his life to protect everyone in the school and encourage everyone to remember how hard these last few months have been on our Austin-East families," he said. "I also want to reiterate that my office is committed to working with the city, KPD, KCSO and KCS to find solutions to these tragic situations."

Superintendent Bob Thomas said on Twitter that the school building has been secured and that all students who were not involved were released to reunite with their families.

KPD said a reunification site was established at the baseball field behind Austin-East High School near Wilson and S. Hembree, for parents to meet up with their children.

“Whenever we have a school incident, it’s our worst fear that it is an active shooter in a school. Most of us are parents, some of us aren’t, but we all have a soft-spot in our hearts for kids,” KPD Chief Eve Thomas said.

Bob Thomas said the school system is cooperating with the TBI in the investigation, offering condolences to families and the school community.

I also want to express my gratitude to KPD and other law enforcement officers who responded quickly to this dangerous situation, and our prayers are with the KPD officer who was wounded. 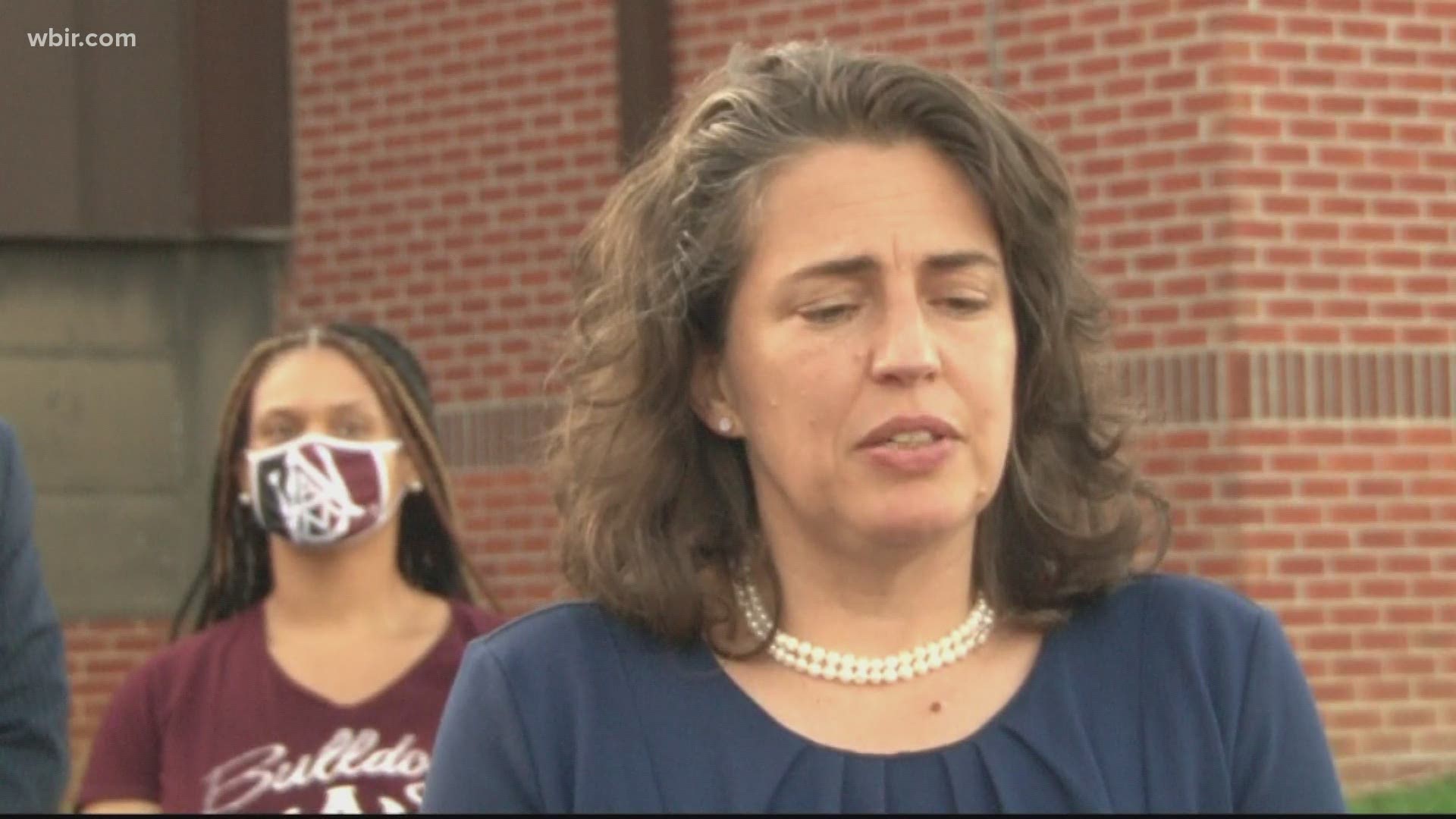 The Tennessee Bureau of Investigation has agents at the school. It is standard protocol for the TBI to handle the investigations into officer-involved shootings.

Phylicia Tate, who was outside the high school as officers arrived in large numbers, took video of what she was seeing as the response unfolded.

One witness told 10News that they were down by the school when they heard the sirens and saw all of the police officers arriving.

"Three little guys came running out of the school and I asked them what happened and they said someone was in there shooting," said Shera Gillett. "I really still don't know what's going on. If I had a child in that school I would be going crazy. I mean it’s ridiculous a parent can’t send their kids to school and keep them safe, who knows."

Gillett is the cousin of Janaria Muhammed, a 15-year-old Austin East student who was shot and killed in February. 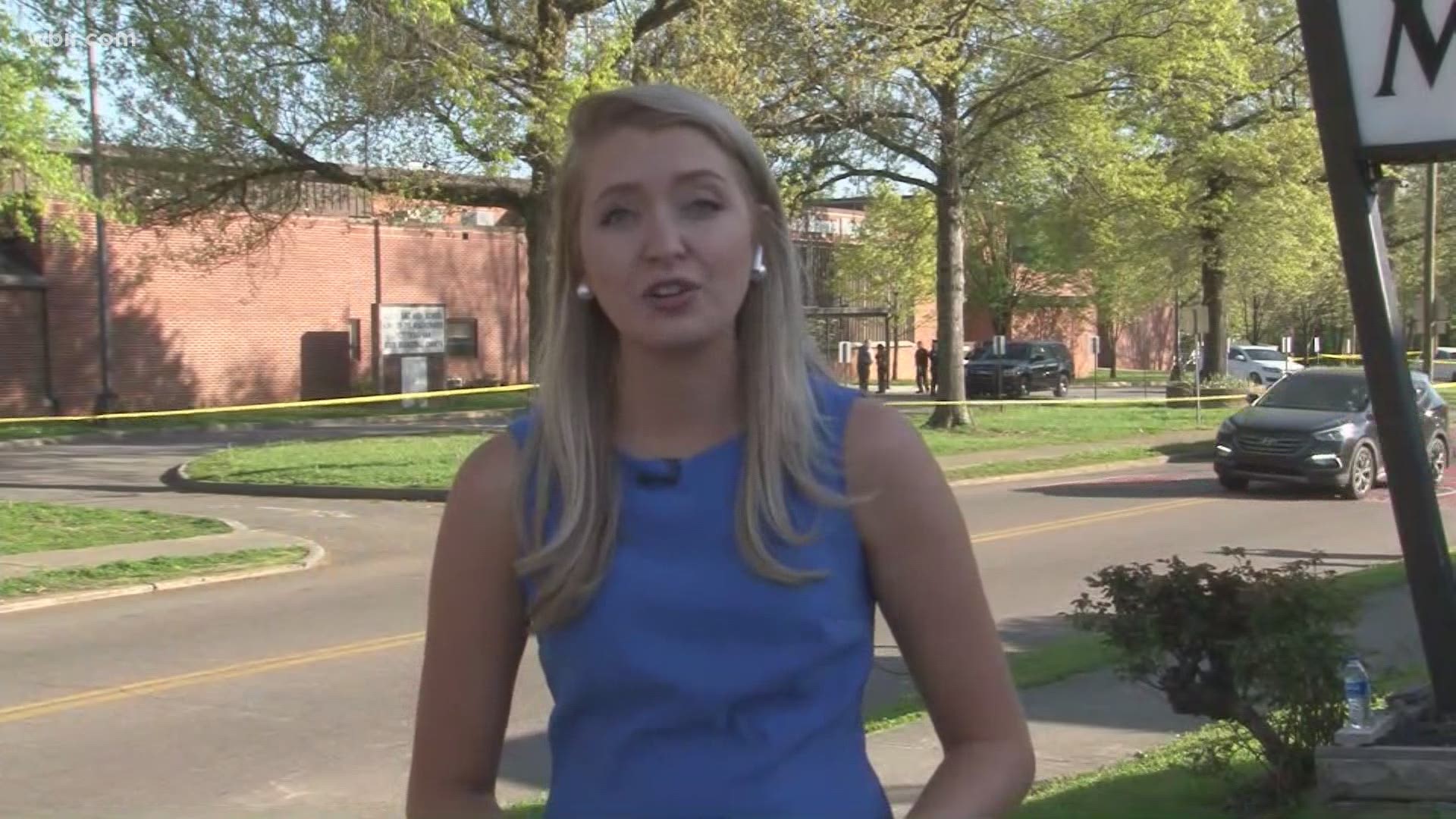 Mother Sheenan Lundy said she got a text message from her daughter at 3:15 p.m. saying the school was on hard lockdown and the police were coming.

She was frustrated that almost two hours later, she was still at the school waiting to find out what happened.

NEW: Parents are gathering outside Austin-East, waiting for information.

Sheenan Lundy says her daughter, an Austin-East freshman is safe. She showed me the text messages with all the information she knows so far. @WBIR pic.twitter.com/I9AWbC0JYv

One grandmother told us that her granddaughter attended Austin-East, and that these students are already grieving the loss of their classmates earlier in the year.

"Somethings got to stop. We've got to come together as a community. It has to stop. We're losing our kids at an early age and it's not fair to us or these parents to be burying these babies," said Sharon.

Sharon’s granddaughter goes to Austin-East. She said these students are already grieving the loss of their classmates earlier in the year; this is just adding to the pain. @WBIR pic.twitter.com/1a6qVonIbu

Four Knoxville teens who currently or used to attend Austin-East have been killed by gun violence in the past few months, sparking community concern and calls to action.

Janaria Muhammad and Justin Taylor were 15 years old when they died. Stanley Freeman Jr. was 16.  All three were students at Austin-East High School.

MEDIA: TBI agents are responding to a shooting incident in the area of Austin-East High School in Knoxville. PIO @TBILeslie is en route. Additional information will be provided when possible.

In addition to the TBI leading the investigation into the shooting, the Bureau of Alcohol, Tobacco, Firearms and Explosives is also responding to the scene.

The ATF will be working with the Knoxville PD as well as focusing on the tracing of firearms and the recovery of shell cases, according to a press release.

The information gathered will be entered into the National Integrated Ballistic Information Network (NIBIN) to see if there are any connections to previous shootings.

Tennessee Governor Bill Lee said during a scheduled briefing on education Monday afternoon that he is monitoring the situation closely, asking for prayers.