Death of Ahmaud Arbery trial | Here's what made it different 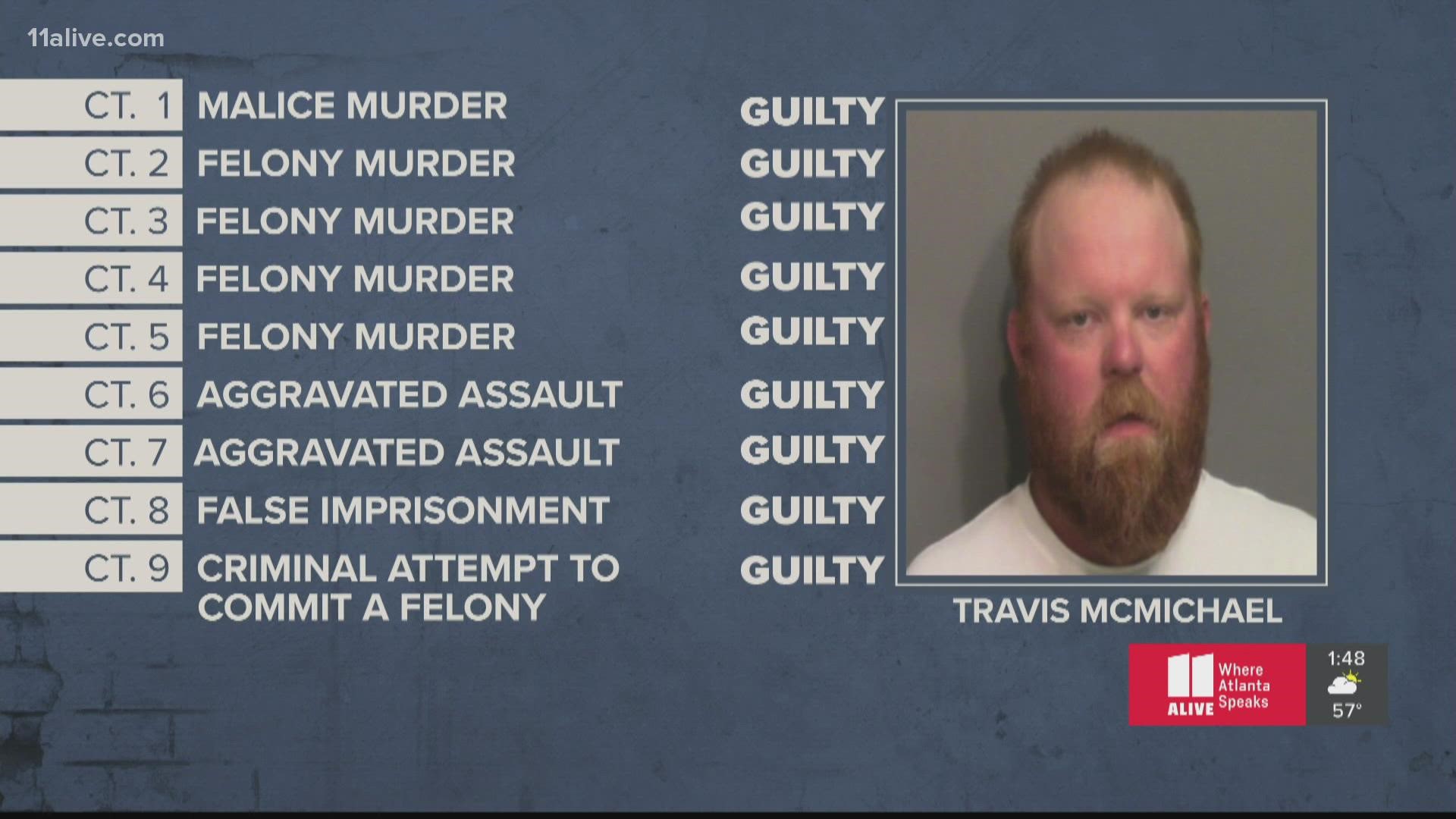 BRUNSWICK, Ga. — A jury has found the three men accused in Ahmaud Arbery's killing guilty on most of the charges they were facing.

On Feb. 23, 2020, Arbery, 25, was jogging in a south Georgia neighborhood near Brunswick in Glynn County, when he was chased, shot and killed.

Arbery, a Black man, was pursued by three white men: father and son Gregory and Travis McMichael, and their neighbor William "Roddie" Bryan.

Here's why the trial in the killing of Ahmaud Arbery was so different from other trials.

The McMichaels and Bryan each faced nine charges in the shooting death of Arbery. All three defendants plead not guilty together and all three were found guilty together on most of the charges by the jury.

Travis McMichael, who shot Ahmaud Arbery, was convicted of all charges.

His father Greg McMichael was found not guilty of malice murder, but guilty of four counts of felony murder, two counts of aggravated assault, one count of false imprisonment and one count of criminal attempt to commit a felony.

The video surveillance and recordings that were released in connection to Ahmaud Arbery's killing were extremely vital for evidence, which is unique to the case. The first video released was taken by Bryan, a neighbor of the McMichaels, while he was following Arbery and the McMichaels in his truck.

The video shows Arbery running through the Brunswick subdivision of Satilla Shores when he was confronted by the McMichaels. In the video, Travis McMichael is seen in a struggle with Arbery, who tried to go around the McMichaels' stopped vehicle blocking the road, when he was shot on Feb. 23, 2020.

Another video shows Gregory and Travis McMichael being taken into custody outside of their family home by the Georgia Bureau of Investigation on May 7, 2020. The video was taken by a neighbor from across the street.

A third video surveillance recording, from a camera across the street, shows a man wearing a white shirt and tan shorts, allegedly Arbery, where he enters a home that was under construction on the day of the shooting incident. Less than a minute later, he is seen going around the back of the home or appears to go into the home's garage. A few minutes after that, he comes out of another home, from the opposite side of the street before leaving the home.

Another surveillance video from inside of the home under construction shows a man that appears to be Arbery, walk into the home, look around and then leave. The video only shows inside the home for a few moments.

During the trial, the McMichaels maintained they were attempting a citizen's arrest, suspecting a burglary, under a slavery-era Georgia law that was repealed after Arbery's killing. In March, the Georgia House voted unanimously for H.B. 479, which bars bystanders and witnesses from making arrests. The bill received a sweeping 173-0 vote and was sent to the Senate to become law. In May, Gov. Brian Kemp signed the bill into law. Then in June, Kemp signed H.B.426  into law -- a landmark hate crime law. It passed by a 47-6 margin.

Georgia was one of four states that didn't have a hate crime law in place prior to Arbery's killing.

Last Friday, a jury reached a verdict on its fourth day of deliberations in the case against Kyle Rittenhouse.

Rittenhouse was found not guilty and acquitted of all charges after pleading that he acted in self-defense in the deadly Kenosha shootings-- a night of protests over police violence against Black people in the summer of 2020. He had been charged with homicide, attempted homicide and reckless endangering after killing two men and wounding a third with an AR-style semi-automatic rifle.

Unlike Rittenhouse, the jury in the trial of Arbery's death reached a verdict on its second day of deliberations.

All three of the accused men were found guilty on most of the charges they were facing. The McMichaels and Bryan will soon be sentenced. While a verdict has been reached for their murder trial charges, Bryan and the McMichaels are also facing federal charges, which include attempted kidnapping and interference with rights.

RELATED: Kyle Rittenhouse found not guilty on all charges in Kenosha shootings