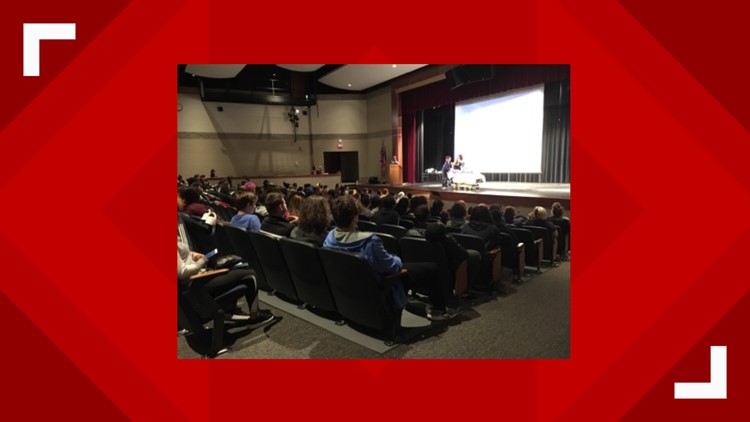 TOLEDO, Ohio — It was an eye-opening moment for students at Bowsher High School Thursday. They witnessed three simulated drug overdoses showing what happens in an emergency room when a patient shows up at the hospital.

This is the first assembly of its kind shown to high school students, but one several, including students, say is much needed. It brings the reality of the opioid epidemic straight to students.

Real life ER scenarios played out on stage. A patient dropped off at the hospital overdosed on laced marijuana. When students heard this situation they laughed, but medical professionals from Flower Hospital stopped them there. They wanted to explain the hard truth they see daily.

"Time out,” said one medical professional during the simulation. “We're going to stop this right here because that's funny? Because you guys don't think this can happen by smoking weed? Four overdoses last week, kids thought they were smoking weed all laced with fentanyl woke up in a cart just like that.”

This is the first time a mock overdose has been performed in a school locally. While students are used to seeing a mock car crash at school, this was emotional.

"This was like very shocking,” said Jewel Sutton, a junior at Bowsher. “Like you wouldn't even think that and then for the nurses to care so much to keep trying and trying. That's very touching. "

"Imagine my parents losing me or me losing kids in the future like that's not cool,” said Capriece Jones, a junior at Bowsher High School. “It's not worth it, just to get high."

Students were met with personal stories from recovering addicts, and parents of addicts. Some of them have seen the worst and come out on the other side, while others have seen this epidemic take their children’s life. Though hard to watch and see- all of it was real. That's why Bowsher Principal Teri Sherwood wanted to bring the program to her students for the first time this year. She knows it’s needed.

"It's a growing epidemic in Toledo,” said Principal Sherwood. “It's an epidemic that hits my students personally or not far removed and it's the reality of today. And if by doing this presentation all day long saves one of my students, the whole day was worth it."

In addition to their simulation F.A.C.T, a support group meaning families and addicts coming together, and Flower Hospital also brought resources for students who needed them. Bowsher leaders say they had several assemblies throughout the day and they immediately saw the impact on their students. Some of them reached out for resources, spoke to their counselor and now some want to spread the message of what they learned.

"I'm going to do more research and tell them like this could happen to you,” said Capriece Jones. “You're not special."

"I wouldn't want nothing like this to happen to my friends,” added Jewel Sutton. “So, I'm going to try to like talk to people tell them it's a reality, it can happen."

While this is the first time the combined group has performed before students, they hope it isn't the last. Leaders want to get their presentation into as many schools as possible next year.