Advancements in science have made having a biological family possible, where once it was only a dream 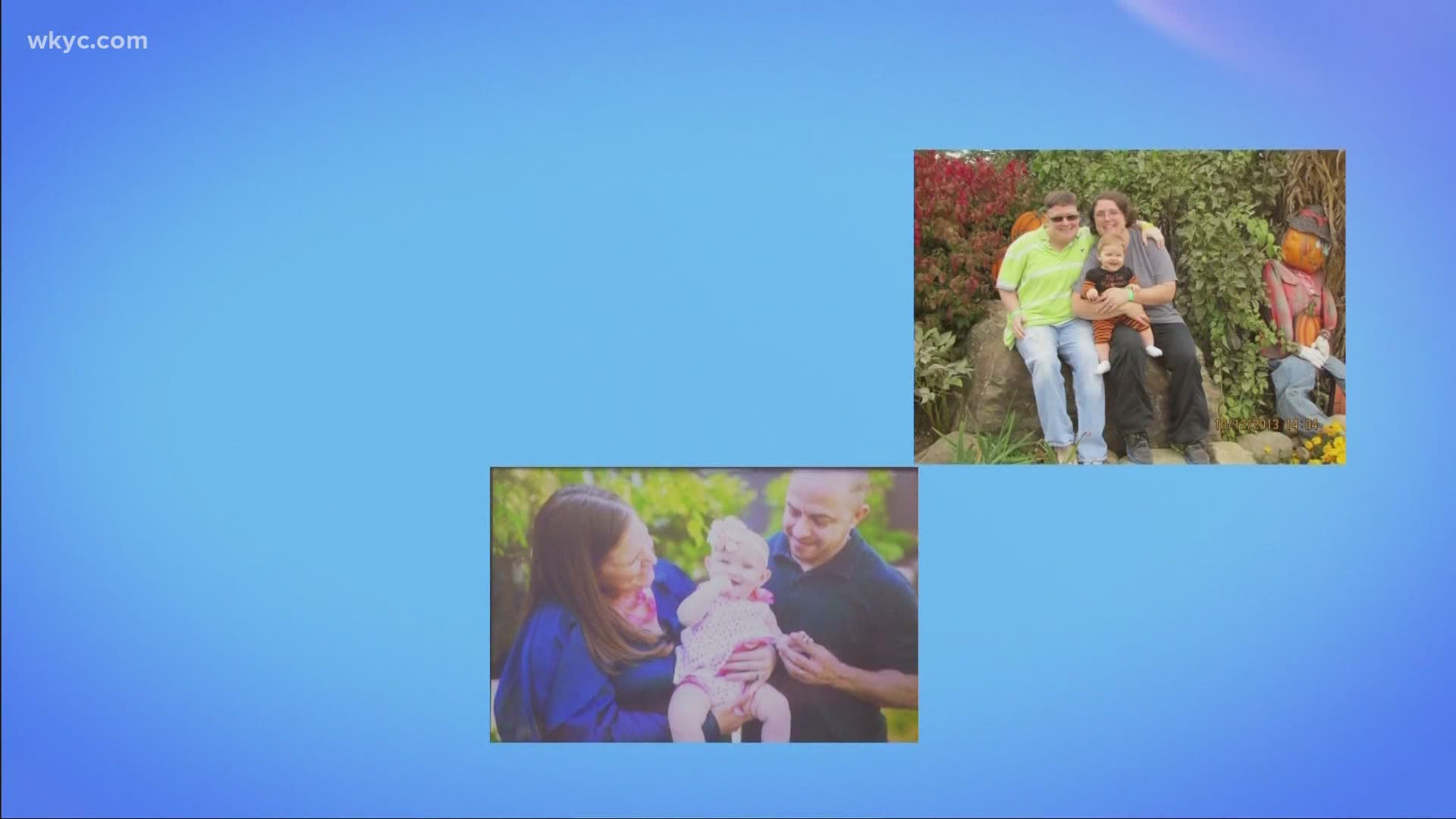 CLEVELAND — Gianna Caminiti represents so much to her parents Mason and Anne.

"I just remember just staring and looking at her," Mason recalled of the moments after Gianna was born. "And it was so surreal, like, wow, we got here, we made it."

When Mason, a transgender man, and his wife Anne Soinski Caminiti decided they wanted to have children together, they knew they would have to turn to fertility treatments to make that happen. With Anne's eggs and a known donor who provided sperm, the couple consulted with Dr. Priya Maseelall of Reproductive Gynecology and Infertility. Multiples tries at insemination followed - before a successful round of in vitro fertilization (IVF) brought them Gianna.

"She's 19 months old now and I still pinch myself sometimes. Like, is she really ours?" said Anne.

Credit: Courtesy of Mason and Anne Caminiti
Mason Caminiti (right) and his wife, Anne (center), welcome their daughter, Gianna (left) into the world on November 19, 2019. Mason is a transgender man and the pair used in vitro fertilization to conceive Gianna.

"It's really educating the person about what is out there and then how their hopes and desires and dreams kind of coordinate with what's out there," Dr. Maseelall said.

Dalyn Washington, who is also a transgender male patient at RGI Ohio, and his wife Crystal just completed an egg retrieval with Dr. Maseelall last week – using Dalyn’s eggs. He says he never expected to have biological children using his eggs, after he had a partial hysterectomy as part of his transition process. This left Dalyn, for now, with ovaries still in tact, despite having already had his uterus removed.

Credit: Courtesy Dalyn and Crystal Washington
When Crystal and Dalyn Washington married, Dalyn had not yet begin his transition process. Here, Crysal (left) and Dalyn(right) pose for a photo prior to Dalyn progressing with those procedures.

"They just tested both of us to see who had the the better egg supply," Dalyn said. "And I thought for sure that it was going to be [Crystal] because I've been on testosterone forever."

"But it turns out I was the one who had little to none," added Crystal. While that was surprising for Crystal, she's thankful they were able to move forward with Dalyn's genetic material.

"I, you know, really just want to tell people that are in the community to not be discouraged or afraid," Crystal said.

"It was kind of scary to have to stop one medication and start some completely different medications," Dalyn added, noting that he's happy his part of the process is over. "It was not as bad as I thought, and I'm just happy that this time next year we're gonna be parents."

The timing of retrieving eggs from Dalyn was critical for the couple, because Dalyn has been informed that he will have to have a total hysterectomy, which means removing his ovaries and with it the rest of his egg supply, before he can undergo the necessary surgeries to complete his full transition.

Dr. Maseelall says advances in both IVF procedures and embryo adoption are opening new doors for people in these kinds of situations to have the families of their dreams.

While Dalyn and Crystal are still early in the process, they now have three fertilized embryos from Dalyn's eggs and donor sperm that they plan to try to transfer into Crystal's uterus in mid-July, in hopes of having their first child.

If they have extra embryos left after they're done completing their family, they've decided they will donate them to an LGBTQ+ family without the means to go through this lengthy, expensive process on their own.

Technological advances have certainly helped lower what can be a very high price point, but the reality of the situation is it's a costly process and not everyone can afford it.

For married lesbian couple Kristin Klink and Melissa Hall, having two children has cost them upwards of $60,000.

"It was scary financially but we ultimately decided if we have to take money out of our retirement, we will we'll just pay ourselves back and that's what we've done," said Kristin of their fertility experience.

Dr. Maseelall also helped the pair welcome their children - first Ireland, eight years ago. Then Scotland, or Scotty, in 2019.

"She was right behind us, 100 percent saying I know I can help you grow your family," Melissa said of Dr. Maseelall.

To get pregnant with Ireland, the couple went through eight rounds of insemination, one IVF cycle and finally, a frozen embryo transfer.

They faced legal obstacles as well. When Ireland was born, same sex marriage was not yet legal in Ohio, so Kristin's name couldn’t be on the original birth certificate, because the pair used Melissa's eggs for the pregnancy, leaving Kristin without a biological tie to Ireland.

Once same sex marriage was recognized in Ohio, Kristin was able to adopt Ireland as a step-parent, and later amended Ireland's birth certificate to include Kristin.

Today, Ohio legally recognizes all marriage – and as long as you’re married when a child is born, no matter how people get pregnant, both parents names can be on that birth certificate.

"We have pictures of me with Scotland's birth certificate," Kristin recalled. "I was just like smiling ear to ear, putting my name on there. It was the best. So it definitely was growth in our world."

Credit: Courtesy Melissa Hall and Kristin Klink
Prior to Ohio recognizing all marriages, same-sex couples could not have both of their names on their child's birth certificate. Here, Ireland gets adopted by her mother Kristin Klink, in a proceeding oversaw by Stark County Judge Dixie Park.

But as attorney Tom Addesa, who practices family law at the law firm of Artz, Dewhirst & Wheeler in Columbus, explains, not all states have the same laws, and there are still very real concerns.

"What we’re concerned about is if you move to another state that's hostile," he said. "[If] somebody files for divorce... it could be raised that well, you shouldn't have any parental rights because you don't have any genetic connection to the child."

The way to protect against that is to file to obtain a parentage order from a court of law spelling out that each partner has equal parental rights despite who might have biological ties to the child, but some courts in Ohio will dismiss those cases because that kind of decree is not required here.

Overall, Tom feels Ohio is a friendly place for members of the LGBTQ+ community to build their families, thanks to favorable case law, including cases that support gestational surrogacy for those who need to go that route.'

RELATED: What to know before egg freezing: From cost, to insurance coverage and even legal issues

RELATED: How much does egg freezing cost, insurance coverage and legal concerns, with fertility lawyer Molly O'Brien: 3 Things to Know with Stephanie Haney

And as for the Caminitis, Klink-Halls and Washingtons, these families want you to know that even with the challenges, it’s all worth it to help create your picture perfect family.

"Even if it's adoption, if you want to grow your family there is help out there," Melissa said.

"It's been an incredible journey and you know I would never trade it for anything," said Kristin.

"It means the world to us to be able to have [these fertility options], you know, the only way that, that we have our family," Anne said.

Mason says, he believes visibility is so important. "And we know that we come from privilege, we're very privileged to do this. We have the resources to do it, not everybody does. So we're hoping someday other people have that privilege and are able to experience that too."

For more information the laws surrounding family building for the LGBTQ+ community and for a list of resources available, visit FamilyEquality.org.