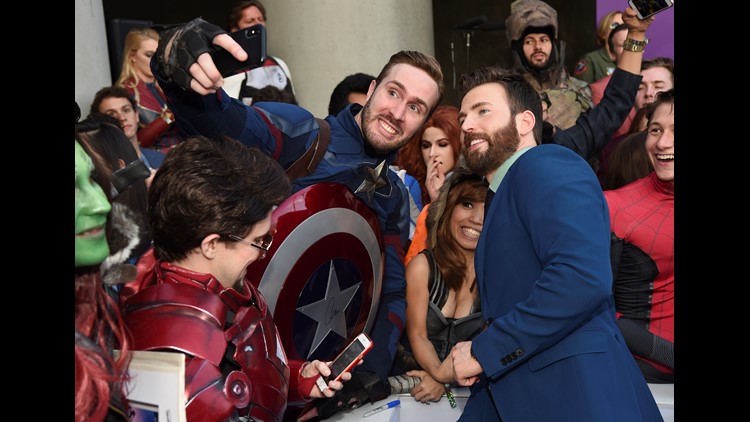 Chris Evans takes a selfie with a fan as he arrives at the premiere of "Avengers: Endgame" at the Los Angeles Convention Center on Monday, April 22, 2019. (Photo by Chris Pizzello/Invision/AP)

HOW WILL IT END? 5 Fan theories of how ‘Avengers: Endgame’ will play out

Potential spoiler alert: This story contains some published theories about what might happen in "Avengers: Endgame." While these are just theories, one or more could turn out to be accurate.

There are two things that seem to be near certain as we head toward the premiere of "Avengers: Endgame." Time travel will somehow be involved and at least one of the original Avengers is going to die.

These are deduced based upon what we know of the Marvel Cinematic Universe, things that the actors and producers have said and even some leaked set photos.

Beyond that, it's still unclear how, or even if, the Avengers are going to be able to undo the "snap" from "Infinity War" that left half the universe's population dusted. But Marvel fans have plenty of theories since the "Endgame" trailers started rolling out.

Here are five fan theories that are among the most plausible. These are potential spoilers, if they are right, so read on at your own risk.

This one from Brandon Davis of Comicbook.com seems like it legitimately could happen.

Marvel executive producer Kevin Feige has reportedly stated that "Spider-Man: Far From Home," a sequel to be released in July 5, starts "minutes" after "Endgame."

Davis theorizes that the Avengers somehow undid the "snap" and Peter Parker never died. Davis' thinks that not only is "Far From Home" a sequel to "Endgame," but it's a prequel to "Infinity War." That's because if the Avengers are able to undo what Thanos did, then "Infinity War" -- at least the part where people were dusted -- never happened.

Look at the trailer for "Far From Home." Peter picks up his new passport before his trip overseas, but the date of issue purposely does not include the year in order to leave you guessing.

Additionally, Peter is back in his old red and blue suit when he gives Aunt May a high-five. We saw at the end of "Spider-Man: Homecoming" that May learned of Peter's double life so she's still aware of what's going on. Also, why would Peter lose that awesome new Spidey armor from Tony Stark in "Infinity War?" Perhaps because he never got it since, by this theory, "Infinity War" didn't happen.

This would also mean that Marvel can move forward with sequels for "Black Panther," "Doctor Strange," and "Guardians of the Galaxy" without having to explain it because, like Peter, they did not turn to dust.

RELATED: 'Avengers: Endgame' prop bets include who diesRELATED: How to watch all the Marvel films online before 'Endgame'The ‘snap’ is not what we thought it was

This is a theory posted on Reddit by u/Enervata.

We all assume the "snap" meant half the people in the universe died. What if they are still alive, but just in an alternate universe? This means that the survivors of the "snap" would live in one universe while those who we thought were dusted would continue on in another.

This would allow more "Spider-Man," "Black Panther," "Doctor Strange," "Guardians of the Galaxy" movies which could move forward independently, without needing to coincide with the original Avengers. It would allow for Marvel to eventually bring in X-Men, Fantastic Four, Deadpool and any future franchises to coexist in the new universe.

Here are the potential flaws. It means Loki and Gamora are really dead (they weren't killed by the "snap"), and it would mean Rocket would be separated in a different universe from the rest of the Guardians. A Guardians sequel without Gamora and Rocket does not seem plausible.

Back to New York

This theory has something the others don't: photographic evidence.

Leaked set photos show Chris Evans, Robert Downey Jr, Chris Hemsworth and Mark Ruffalo back at the scene for the Battle of New York from the first "Avengers" movie. Evans is in his uniform from that 2012 film and Hemsworth has long hair again. We also see Tom Hiddleston as Loki and Paul Rudd as Ant-Man.

Now, what does this mean? There are plenty of possibilities. One suggests it involves going back in time to round up all the stones before Thanos can get them. Another is that the Avengers go through the wormhole above Stark Tower together to stop Thanos before he can begin collecting the stones.

Soul for a soul

There's not a lot of detail on this one, but since it seems inevitable that at least one of the Avengers dies in the end, perhaps they all do -- trading their lives for others.

What if, similar to what Thanos did by tossing Gamora off that cliff to get the Soul Stone, the Avengers one-by-one sacrifice themselves to save the others?

The person who posted this theory brings up that in "Infinity War," we kept hearing the phrase "We don't trade lives." Perhaps that comes back to bite them in the end.

Infinity War \\ Spoiler Theory
.
.
.
.
.
The phrase “We don’t trade lives” kept getting used. The people that faded were newer members (in front of loved ones) & the originals stayed. I keep thinking that in A4 there’s gonna be trade off of SOME lives for others. A soul for soul.

It would create a legitimate way for the actors to leave their roles permanently. Chris Evans has made no secret he’s done playing Captain America.

Doctor Strange was stalling for Ant-Man

Remember that Doctor Strange said in "Infinity War" that he would not hesitate to sacrifice Tony or Peter to protect the Time Stone. But, he later gave up the stone to save Tony. Why? It's not like they were best buds.

Strange, you'll recall, looked ahead at over 14 million possible outcomes and only saw one in which they would win.