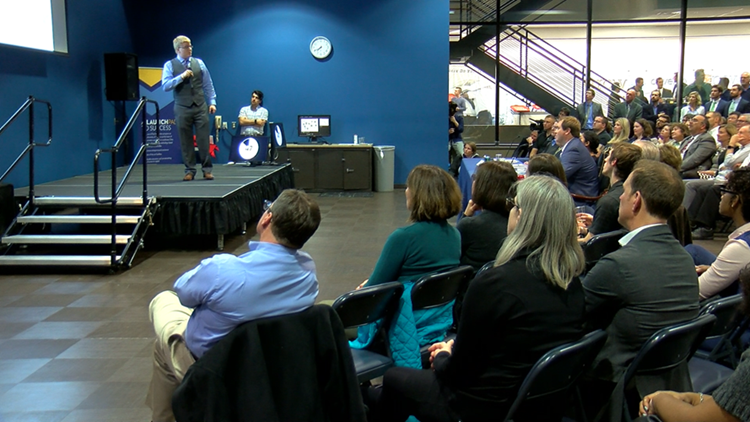 TOLEDO, OH (WTOL) - Alicia Wagner has a business concept and she needs some seed money to get it off the ground.

It's called PUDL. it's an app where you can send your messages from different platforms and put them in one place.

"We're projecting in 2020 there will be 2.9 billion users of social media and there's currently not an application like this in the market," Wagner said.

She participated Thursday night in 'Pitch and Pour' sponsored by the University of Toledo LaunchPad Incubation Program.

Five teams got five minutes to pitch their business models to judges. The top prize was $10,000.

The competition is based on the popular TV show ''Shark Tank''   which judge and LaunchPad graduate Tom Burden appeared on last Sunday.

The F-16 mechanic at the 180th Ohio Air National Guard Fighter Wing convinced three of the sharks to invest in his product, a flexible non-slip tool tray called Grypmat.

"I would say the biggest recommendation is persistence. Don't ever quit,"said Burden.

The mission of the Incubation Program is to promote economic development in northwest Ohio through innovation, technology and something else.

"To help give exposure to entrepreneurial start-ups that are trying to bring their company to market" according to Jessica Sattler of the Incubation Program.

The top winner of 'Pitch and Pour" was Chris Rumpf's FLYGHT. It's a retail and restaurant software program that automates and unifies what Rumpf calls the "business ecosystem."