Stretching Your Dollar: Is College Debt Worth It?

Student loan debt is a major burden. The average college student graduates with $35K in student loans and the average starting salary for college grad is $50K. 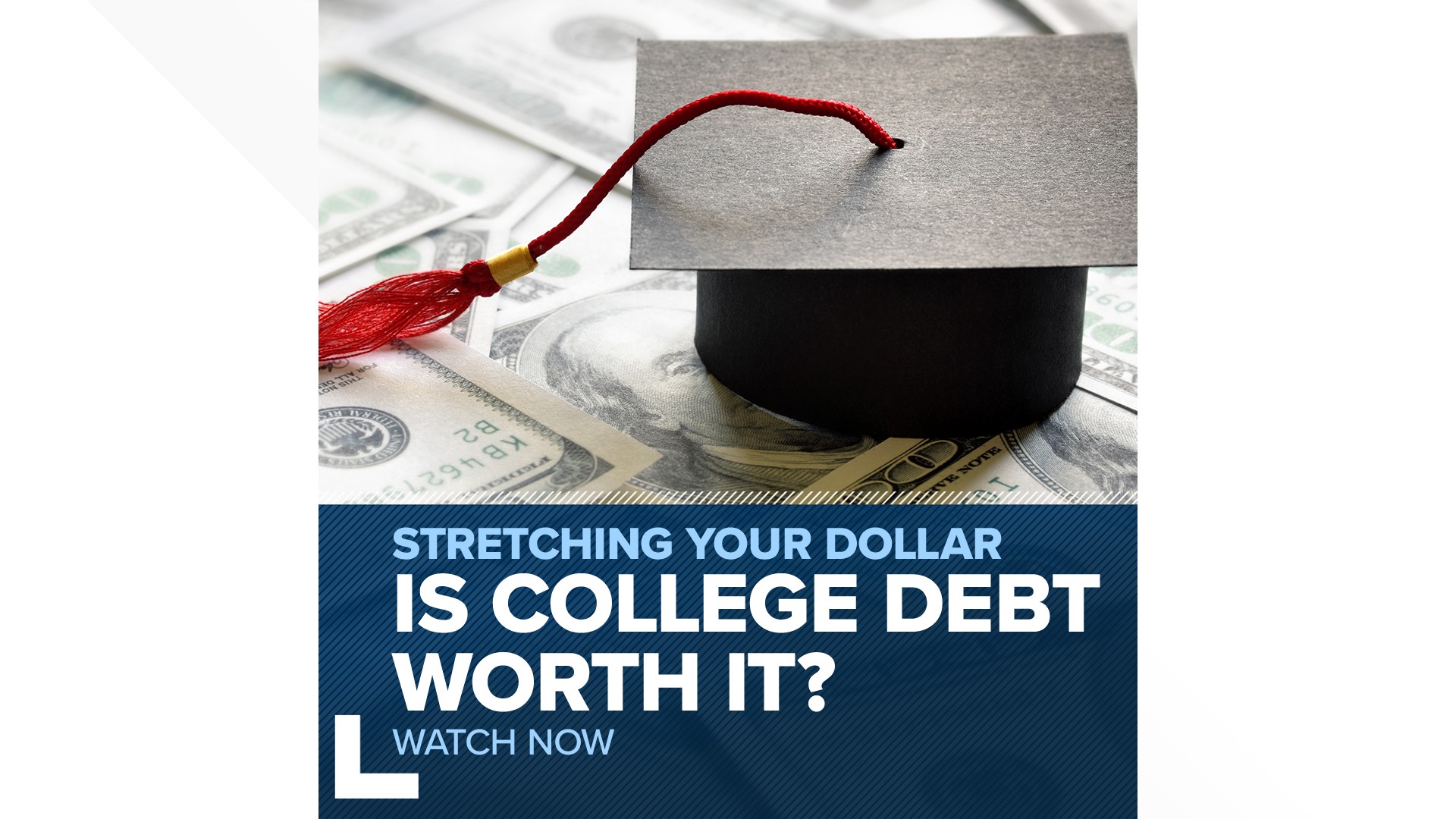 TOLEDO, Ohio — The Federal Reserve reports the current student loan debt in America is more than $1.6 trillion and tens of millions of Americans are carrying the load.

WTOL 11's Amanda Fay asked viewers if they have student loan debt. If so, how much? And how does it impact their daily life? Many people responded, some with sobering stories. Two Toledoans agreed to sit down with Amanda to have a candid conversation about student loan debt.

Patricia Shull and Zach Menden and took different approaches to higher education. Both of them have tens of thousands of dollars in student loan debt.

Patricia got her Associates Degree from Owens Community College in 2001. Nearly 15 years later, she went to the University of Toledo to study Hospitality Management, but things didn't turn out at planned.  "I had a transition in jobs and I wasn't able to get back to finish those three classes," says Patricia. Five years later, she's still paying down about $26,000 in student loan debt. "I did all of this to better myself. How much better is it truly?" she questions.

Zach, on the other hand, spent seven years at U Toledo studying pharmacy, where he graduated with two degrees. He waited six months to find a job and all the while interest was adding up. In all, he had about $56,000 in student loan debt. "You try to ignore it or forget about it. If you don't know and think there's $56,000 in debt, it's not there," says Zach.

The weight of student loan debt is a major burden. The average college student graduates with $35,000 in student loans and the average starting salary for college graduates is $50,000 a year.

Anthony O'Neal is the author of Debt Free Degree. He explains the impact. "Sixty percent of individuals ages 18-29 are putting off going after the American Dream; being a homeowner, starting a family, buying a car, being an asset to the community," says O'Neal.

O'Neal says 12 years after graduation, borrowers still owe 65 percent of their original balance with interest. The average monthly payment is just under $400 a month. "If we take that same payment, flip it and invest it, like you said, over the next 20 to 40 years we can have anywhere from $2 million to $4.1," says O'Neal.

Patricia and Zach say something's gotta give. They say the system needs fixing. Until then, Zach says he wishes he was given other paths to follow in high school. "Whether it be in trade work or factory work. Those are totally viable options," says Zach.

Options Scott High School guidance counselor Michael Mercurio says are on the table.  "I would say, it's not necessarily that we're shifting direction, we're just expanding direction. We're giving kids all the opportunities that are out there they may not have heard about before," says Mercurio.

Mercurio says career tech programs at Toledo Public Schools are tailored to job opportunities. He also says for students looking to attend a four year school, the College Credit Plus program can save students money. "It's all paid for by the state of Ohio. So they're able to take some college coursework and not have to pay for that and get credit for it," says Mercurio.

It's a step toward finishing school, without taking out a loan. O'Neal has three ways for students to do it. First, pick the right school. "It really doesn't matter where you finish. It matters how you finish. Do you graduate 100 percent debt free? Do you save money by doing the research and making sure you go to the best college that's within your budget," says O'Neal.

Then, O'Neal says to work ten to 19 hours a week. "Studies have shown not only can you pay cash for college, but then also your grades would be better and this is helping young people get ready for their career lives," explains O'Neal.

Lastly, O'Neal says spend one hour a day looking for grants and scholarships. He has some on his website.

What if you're already in debt? Zach has a plan. Now that he's secured a good-paying job, he's determined to pay off his debt in two years, which comes with sacrifice. "That pretty much meant putting pretty much everything I make towards my student loans, which is a huge, huge, huge bummer," says Zach. It's money he says he'd rather be investing.

Patricia says if she could do it again, she'd pick a career that didn't require a degree. "It brings you back to the shoulda, coulda, wouldas. Should I have done that? Could I have done something different? Would I do it again? Probably not," says Patricia.

If you're in debt, O'Neal recommends the snowball method. Line up all your debt, smallest to largest. Get a side hustle and put all that money on the smallest debt until it's paid off, then work your way up to the largest. You can learn more here.

Other experts recommend the avalanche method. That involves paying off the debt with the highest interest rate first. Learn more here.