The Northeast Ohio startup company is trying to secure funding to start full production of an electric pickup truck. 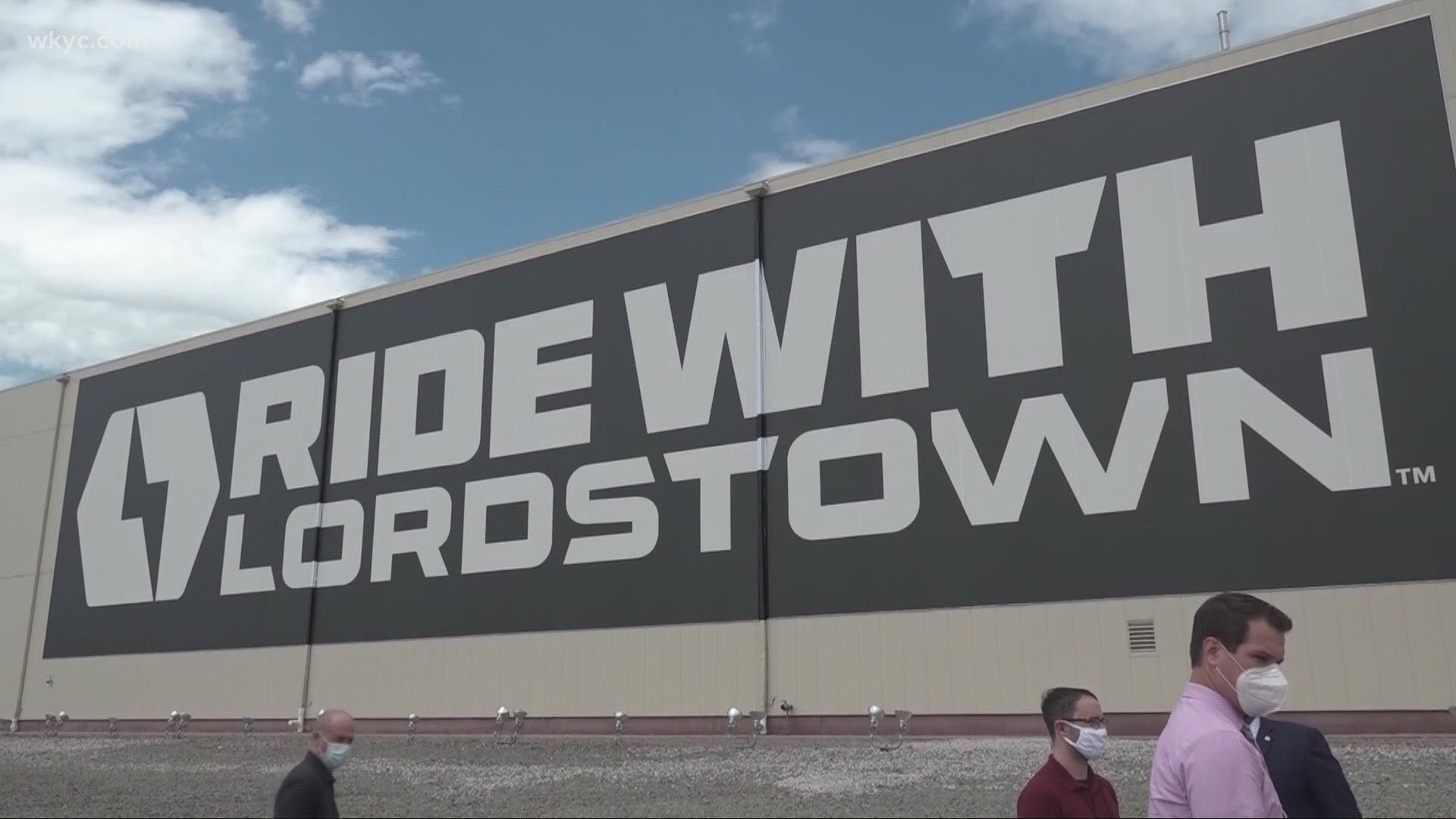 LORDSTOWN, Ohio — *EDITOR'S NOTE: The video above is from June 2020

Startup commercial electric vehicle maker Lordstown Motors says it may not be in business a year from now as it tries to secure funding to start full production of an electric pickup truck.

In a quarterly regulatory filing Tuesday, Lordstown said the $587 million it had on hand as of March 31 isn't enough to start commercial production and begin selling the full-size pickup, called the Endurance.

"These conditions raise substantial doubt regarding our ability to continue as a going concern for a period of at least one year," the company said in the filing with the Securities and Exchange Commission.

Shares of the company, which is set up in a now-closed General Motors plant east of Cleveland, fell 16.2% to close Tuesday at $11.22. They lost another 3% in after-hours trading.

On May 24, CEO Steve Burns warned that production could be cut by over half to only 1,000 vehicles this year unless Lordstown raised an undisclosed amount of new capital.

Tuesday's SEC filing appears to be much more dire. "Going concern" is a term companies typically use when noting that their outside auditors are questioning their ability to remain in business.

Lordstown reported a first-quarter net loss of $125 million and said it had a deficit of $259 million as of March 31.

The filing said management is evaluating new sources of capital, including issuing more equity or borrowing from partners, government or financial institutions.

"There can be no assurance that such financing would be available to us on favorable terms or at all," the filing said.

Burns said in May the company expects to lose up to $380 million this year, but he assured investors that Lordstown will end 2021 with at least $50 million in cash.

He said the company expects to start making the Endurance in September.

The $52,500 Endurance has passed two of the U.S. government’s toughest crash tests, and it will beat Ford Motor Co.’s electric F-150 to market, he said, adding that Lordstown has purchase agreements for about 30,000 of the trucks.

A company spokesman said he could not comment beyond Burns' guidance from May, but 3News did speak with Lordstown Mayor Arno Hill, who also painted a pessimistic picture.

"That ship hasn't totally sailed yet, but right now, it's not looking real well," he said.

Less than two months after GM shut its Lordstown plant down for good in March of 2019, the company confirmed it was "in discussions" to sell the facility to electric pickup company Workhouse Group, which later led to a mostly independent entity spun off as Lordstown Motors. The sale was lauded by then-U.S. President Donald Trump as "GREAT NEWS FOR OHIO!"

Lordstown Motors has boasted about creating 1,500 jobs in the Mahoning Valley by 2025, a far cry from the 4,500 GM workers that were once there. Even though local leaders had hoped for progress, the future now appears to be in serious jeopardy.

"They perhaps got in over their skis and didn't raise enough capital for what they needed to do," Michael Goldberg, a business professor at Case Western Reserve University, said. "The cost of putting a production line together in the electric vehicle space -- something like what Tesla's done, take literally billions of dollars -- so they were under-capitalized when they went into the market.

Goldberg also factored in new competition from Ford and GM, the latter of which plans to return to Lordstown with LG Chem in the form of an electric battery cell factory. Even with roughly 500 people currently employed at Lordstown Motors, Hill does not seem to be counting on the company long-term.

"You can’t count on something you don’t have," he said. "It’s a little bit of a downer, but I’m waiting to see what the next step is."

The village had not offered tax abatements to Lordstown Motors, and thus does not have any financial risk, should the company not be able to fulfill its promises. Gov. Mike DeWine's office did confirm the state gave the manufacturer $29 million in tax credits last December, but that value won't go into effect until the jobs are created.