To know how far Toledo's come, we've got to see where it's been - Downtown's renaissance was years in the making

Fifth Third Field and Huntington Center paved the way for ProMedica, Hensville and other ventures. And what's ahead promises to keep the momentum going. 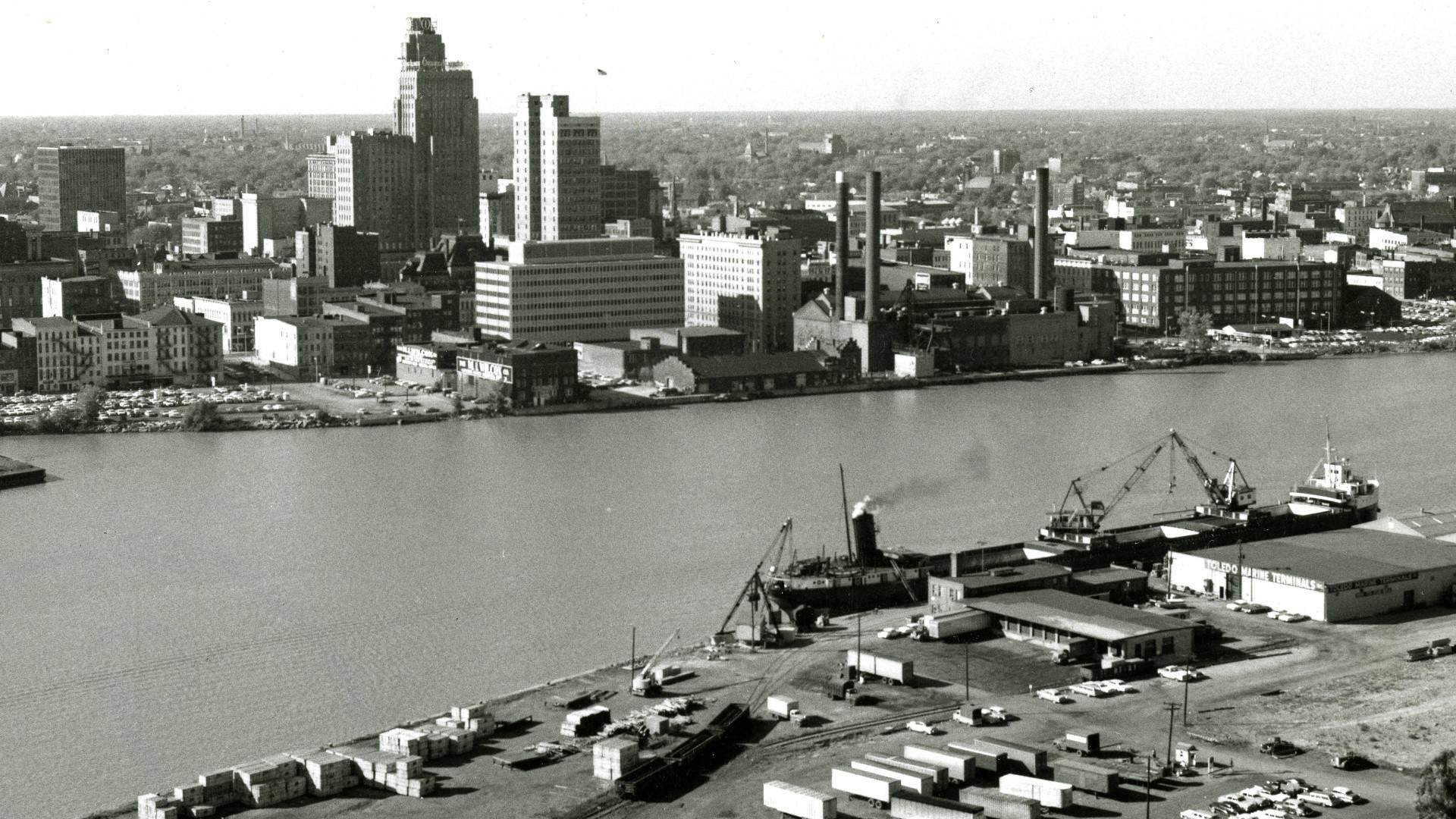 TOLEDO, Ohio — COVID-19 impacted a lot of people in negative ways economically. But from a development standpoint, in some ways, things kind of sped up. That’s a big reason why northwest Ohio’s biggest town is going through a transformation.

Maybe we'll look back 50 years from now and say, "Yeah, that's when it was happening."

But before we get to our future, we need to focus a little bit on our past and take a look at when Toledo went through a renaissance before.

In the early 1900s, downtown Toledo included names like Tiedtke’s. It was the department store that 85-year-old lifelong Toledoan Joann Vanderpool looked forward to experiencing every time she visited.

“You could do everything from get your shoes fixed to buy a wedding gown," Vanderpool said.

She remembers when going downtown was an event.

Vanderpool says downtown was the place to go to get your meat for Sunday dinner, to pay your bills and to buy a loaf of bread.

But as the years rolled on, the Toledo she knew changed, never to come back. Not the way she knew it.

Paul Toth is the president of ConnecToledo. It’s an organization built to market all the Glass City has to offer. And right now, he says the sales pitch is all about hope for what’s to come and building a new Toledo, because what’s in the past is past.

"Toledo kind of grew up early and we went through this renaissance - the industrialization of America," Toth said. "And Toledo was right there. We were a big-time city. And unfortunately, we kind of had a downtown that wasn't ready for the '70s and '80s and we started seeing a downturn.”

But he says the effort is there once again to create another heyday atmosphere and make downtown a vibrant place for people to live and shop.

RELATED: Non-profit café coming to Toledo lets you pay for your meal by volunteering

And the data is undeniable. Over the last five years, the investment numbers are astounding. There was $75 million put into renovating the steam plant creating ProMedica’s headquarters. There was $40 million spent on renovating the Renaissance Hotel. Work at the Tower on the Maumee - $40 million, The Berdan Building - $35 million, Hensville - $20 million, the Toledo Lucas County Main Library - $12 million.

And that's just a quarter of the billion dollars spent the last five years.

Vanderpool may be 85 years old, but she says she’s not a curmudgeon against progress. In fact, while speaking to us and looking over the current construction on Summit Street, she said, “I was here when it was what it was ... and it was great. I wouldn’t get rid of my memories for nothing. But am I gonna dis this? No.”

Local leaders say renovating the steam plant into the ProMedica headquarters in 2017 brought jobs, enthusiasm and momentum, setting off a shockwave of development and investment, and it’s being felt throughout the downtown streets.

ProMedica President and CEO Randy Oostra says in the last five years there’s been $1 billion invested in Toledo. And he says there will be another $1 billion in the next five.

"I talked to somebody last week who moved back - they grew up here - they were out on the East Coast," Oostra said. "They came back a year or two ago, and their response was, 'What the heck happened?' This idea that we can do anything we want to do - we can become a tech community, we can do the things that we're good at - there are a lot of things that we can do. And if we keep working together, we're going to achieve things in five years that people didn't think possible."

There’s development in motion right now with the renovations of the Park Inn, SeaGate Convention Centre, and Fort Industry Square. But now attention turns to the next potential epicenter of growth, the next shockwave at the four corners, at Madison Avenue and Huron Street, which includes the Nicolas and Spitzer buildings.

“We think the same thing can happen there if we re-energize that corner and re-develop those buildings,” Toth said. “There are buildings within two blocks that are also vacant. We are 100 percent certain that we will see the same thing happen within those blocks as we saw down on the riverfront.”

Oostra says for the first time in the history of Toledo there is this huge engaged business community working with the county, city, port authority and others to say, "Let’s all work together."

But Toledo’s best days go beyond the aesthetics downtown. Oostra says Toledo’s neighborhoods are essential in making this renaissance a success.

“Already we’re talking about what might be the next neighborhood,” he said. “Where do we go next? Who’s working? Where might the gaps be? Who are the partners? And I think that’s kind of the secret here. We have to just keep focusing on the various neighborhoods.”

Toth says he’s not sure what changed or what flipped, other than the fact people really are starting to feel good about Toledo, and feeling good about momentum. He says he believes they want to be part of something that’s moving in the right direction. Toth points out Detroit’s gone through it, Cleveland’s had its renaissance, too, and he says now it’s Toledo’s turn to flip the script.

ConnecToledo officials say to keep your eyes on the Middlegrounds, the Warehouse District, and Uptown, and they say announcements regarding future development there are right around the corner. Also, ProMedica’s Randy Oostra says Toledo’s progress has to be rooted in good health, solid education opportunities, and safe, affordable housing. He says that kind of stability can provide job opportunities and a stronger local economy.

For Joann Vanderpool, her recent trip downtown, like many others who’ve lived here all their life, was a trip down memory lane. But with each new trip, she says it serves as a preview of what’s to come for her downtown, and how it’s taking shape for generations to come.

When boats docked in the Maumee River and people gathered in Promenade Park during the summer in the 1980s and 90s, Lucas County Commissioner Pete Gerken thought that might be downtown's heyday.

Longtime Toledoans may have fond memories of "Party in the Park" or "Rally by the River," but downtown Toledo has transformed into something Gerken always envisioned.

"We needed to make downtown a 365-day-a-year downtown," he said.

In the past 20 years, the area became home to Fifth Third Field, Huntington Center, ProMedica's headquarters, Hensville and a metropark. Plus dozens of bars, restaurants and small businesses popped up.

Credit: Jay Skebba / WTOL
Today, the 200 block of Monroe Street is home to the outfield wall of Fifth Third Field on the left, and the SeaGate Convention Centre on the right.

Bringing the Mud Hens downtown was one of the first major dominoes to fall to jumpstart the revitalization.

But not only did the commissioners need to secure funding and a site for Fifth Third Field, but they also had to convince northwest Ohioans to venture downtown to watch baseball. The stadium was completed in 2002 for $39.2 million and served as a launching pad for development in the Warehouse District.

Fifth Third Field was an instant success as fans flocked to the stadium and visited nearby bars and restaurants. Five years later, ground was broken on another massive project just a couple blocks north between Jefferson and Madison avenues.

The Huntington Center was built for $105 million to house the Walleye and large concerts, and opened in 2009.

"The teams needed the community to give them new life," Commissioner Tina Wozniak said. "Once that happened, everyone was really excited to watch both in great venues in a community that 100 percent backs both teams. It brought so much excitement, and that was before we had all this life in downtown Toledo. Look at us now."

Fifth Third Field hosted the International League all-star game in 2006, and the Huntington Center has played host to major performers like Elton John, The Eagles and Jason Aldean.

Gerken says he always knew downtown had the potential to be a major attraction, but it took developments like the stadiums to get the ball rolling.

"We've overcome that downturn where people kind of forgot about downtown and now it's the place where people want to be," Gerken said. "It's safe, it's clean, there are places to live, there are things to do for all ages. And it just gets better."

The downtown momentum continues today with projects like the Summit Street reconstruction and convention center overhaul.

The $70 million convention center project will see a 200-room Hyatt hotel, 1,000-seat ballroom and a new exterior. ProMedica committed $5 million to the project and will receive naming rights to the new facility.

Wozniak said these kinds of projects will boost Toledo for years to come.

"Little by little, so many great things are happening."