Chestnut ate 40 bowls of red beans and rice Saturday for a speed eating contest in New Orleans. And that's not even the crazy part.

NEW ORLEANS — What do you get when you cross traditional Creole food and a seemingly bottomless stomach? Apparently, you get Joey Chestnut.

He holds world records for eating hot dogs, twinkies, grilled cheese, hard-boiled eggs, chicken wings and even asparagus. The list goes on and on. But he added another title to his collection in New Orleans Saturday: Red Beans and Rice.

Chestnut scarfed down 40 bowls of red beans and rice at the Blue Runner World's Red Beans and Rice eating championship at the New Orleans Fair Grounds, winning a $1,500 check.

But that's all details. You read that first part right. In eight minutes, Chestnut ate 40 bowls.

Credit: WWL-TV
Every contestant started with one bowl of red beans and rice in hand, and 19 more on the table in front of them.

You want to know something even crazier?

"I'd never eaten red beans and rice before I started getting ready for this contest," he said.

And getting ready can be brutal, especially because the Louisiana staple food is much runnier than what Chestnut and other competitive eaters are used to.

"It's a very fast food," he said. "Yesterday and the day before, I had very little solid food, so it's pretty much a cleanse to make sure that I'm absolutely empty and loose."

Not the usual New Orleans diet, but, hey, if it works, it works. He beat out 12 other competitive eaters, including two from Baton Rouge.

And speaking of fast food: Chestnut took seven seconds to finish his first bowl once the timer was going. Just watch: 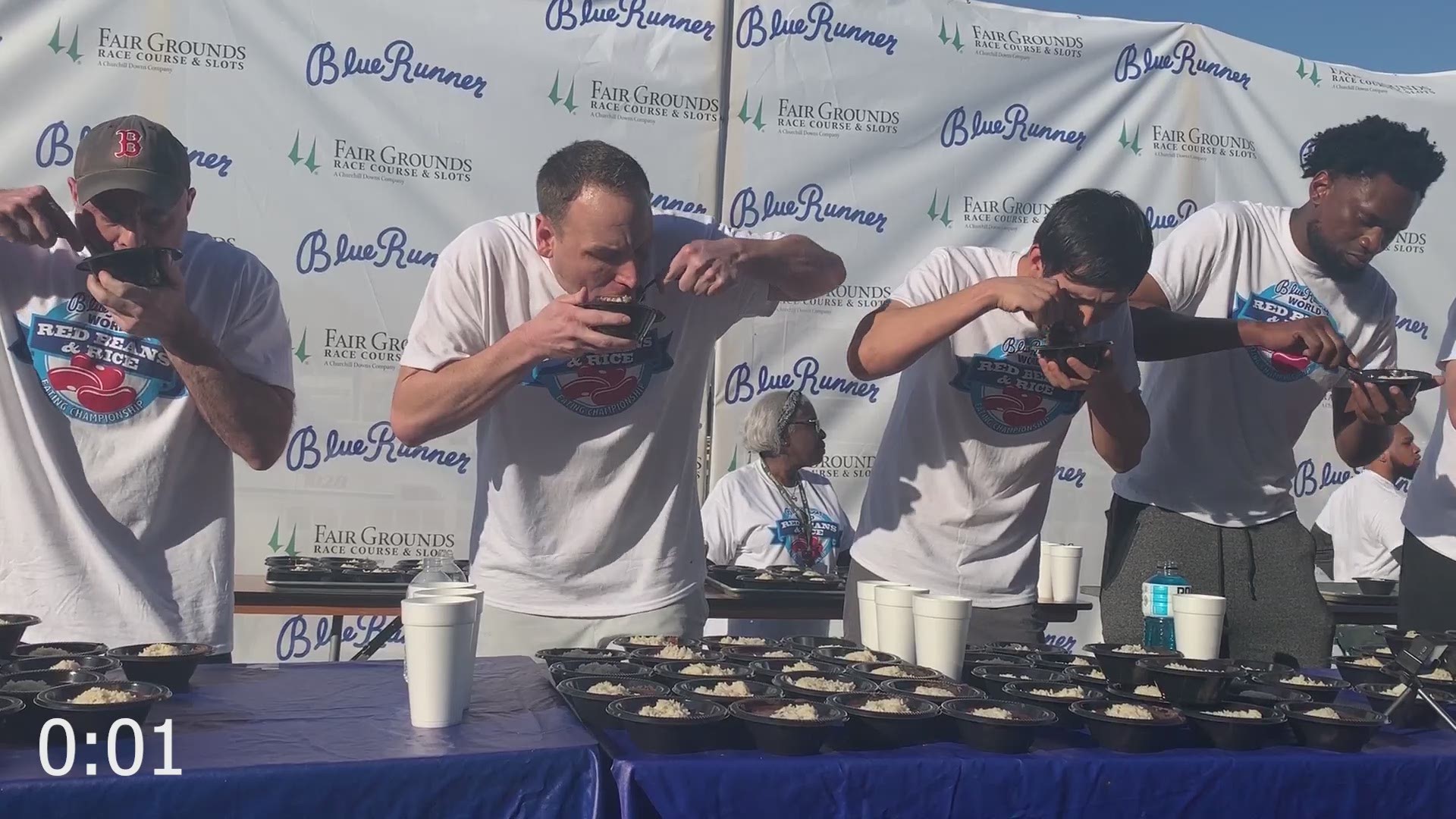 "I think about all the little things, my rhythm, my breathing, sitting up straight, the swallow," he said. "A lot of people when they're eating in these contests forget to breathe. And then when they forget to breathe, they have to breathe through their mouth, and when you're breathing through your mouth, then you're not eating at all."

Even eating all that food didn't seem to phase him in the slightest. Almost immediately after finishing, Chestnut was bantering with the crowd, answering questions and joking about his performance.

For most people, eating a huge serving of red beans and rice means it's time for a nap. But for Joey Chestnut, its Miller Time!

Credit: WWL-TV
Joey Chestnut (left) and Crazy Legs Conti (right) kick back while waiting for the judges to tally the bowls.

Yup, that's a can of Miller Lite in the champion eater's hand. He didn't drink any of the water provided while he was eating. Instead, he decided to crack open a cold one to celebrate while waiting for the judges to finish counting all the bowls.

"it's time to relax," Chestnut said with a beer in his hand and a table of empty bowls in front of him.