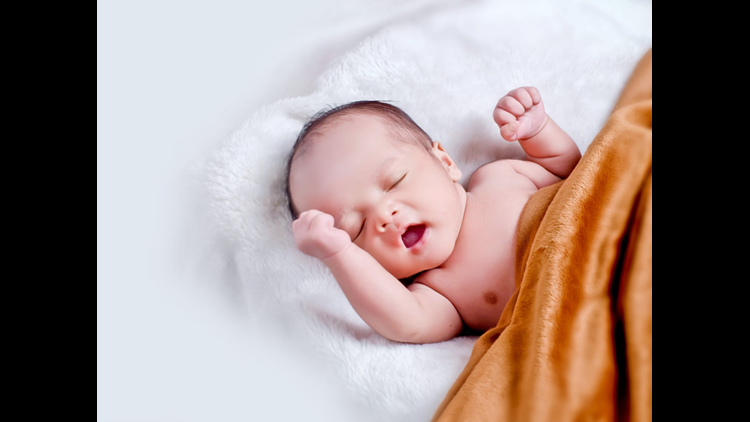 Family Focus: Study shows parents don’t catch up on sleep until 6 years after having a baby

TOLEDO (WTOL) - Parents, you probably don’t need a study to tell you that you sleep less after welcoming a baby into your home.

But you might be surprised at just how long it takes for you to catch up on that sleep.

A new study out shows it takes six years for parents to recover their sleep after the birth of their first child.

READ MORE: Study: Parents’ sleep doesn’t recover until 6 years after having a baby

Angela says while Claire is a great baby and is happy, she doesn’t seem to need much sleep.

Angelica says first it was colic, then teething and separation anxiety. Now, she's not really sure what the problem is, but says she's tried everything to get Claire to sleep through the night.

“Typically she’ll wake up around midnight, 4 a.m. and then be up for the day around 7:30 a.m.,” says Angelica said about Claire’s sleep schedule.

Angelica is a stay-at-home mom and says towards the end of the week, the lack of sleep starts to set in.

“You start to get a little drawn out, drink more coffee,” Angela said.

The study also found higher household income and psychosocial factors such as dual vs. single parenting did not appear to protect against these changes in sleep after childbirth.

“There are cardiovascular effects. There are effects on your heart function and blood pressure, for example. There are impacts on glucose control, so it can lead to diabetic complications.” Those are just some of the medical problems," said Regional Director of Sleep for Mercy Health Dr. Michael Neeb about lack of sleep.

Added to that is what sleep deprivation can do to our brains. Dr Neeb says the ability to concentrate and think clearly could have consequences.

“Injuries, accidents, productivity at work drops when people are not sleeping enough. So it’s a huge range of impacts that we tend to not take seriously enough,” he said.

Dr. Neeb says the first three months of a baby's life are difficult. They need to be fed and changed, but in the six to nine month range, parents can start sleep training.

He says the cry it out method works. Going cold turkey is hard, but he recommends lengthening the amount of time every night.

He also says everyone needs to be on the same page.

When children get older, Dr. Neeb says keeping them in their own room is half the battle. He says co-sleeping is a hard habit to break and no one sleeps well.

Dr. Neeb says parents could offer kids a reward for staying in their rooms. He also says parents should model good sleep behavior. Establish a routine and everyone should relax at the end of the day and turn off the screens.

Dr. Neeb says there’s nothing wrong with a new parent catching a nap - sleep when your children sleep.

“There’s a feeling that a lot of parents have which is, ‘my child’s down for a nap and I can get the laundry done and I can do this chore and I can get that done.’ Really, if you’re running on empty, you should be sleeping during those times, too, to catch up,” Dr. Neeb said.

Angelica says she naps when she can and while she was first surprised by the study’s findings, she’s quickly learning that it makes sense.

“When you have kids it’s kind of like that until they move out really, because they go through stages. They get sick and when they’re teenagers you have to worry about them coming home,” said Angelica.

Every parent would agree.