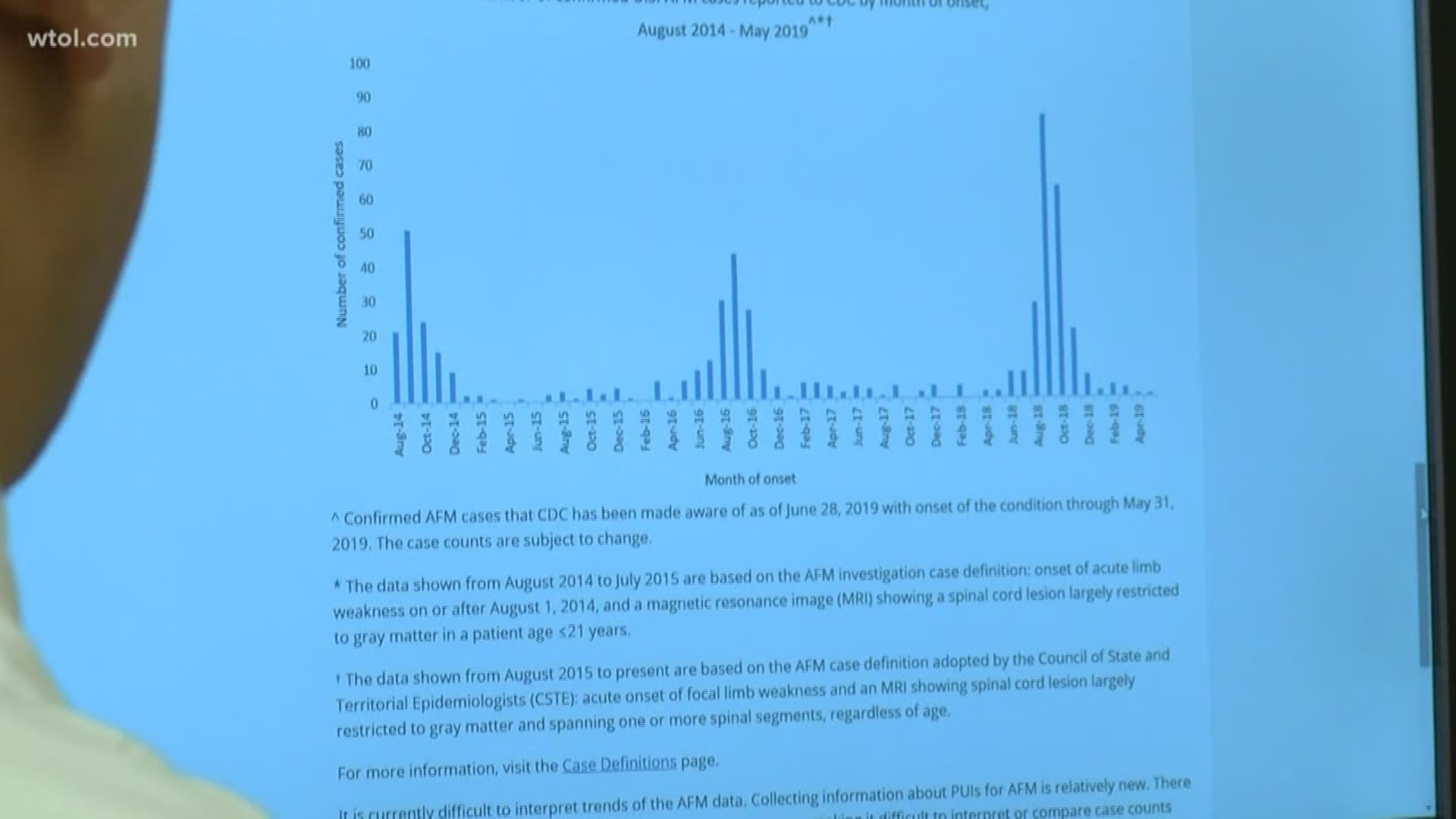 TOLEDO, Ohio — Acute flaccid myelitis, or AFM is an illness you'd likely never heard of until last year. Hundreds of cases of the polio-like illnesses popped up in children across the country last fall, including one in Lucas County.

It's a terrifying scenario for any parent: Your child suddenly comes down with weakness and loss in muscle tone, without any explanation.

"There's a lot that we don't know yet," said Dr. Michael Nagel, a pediatric neurologist with ProMedica.

AFM affects the nervous system and is a condition Dr. Nagel would likely treat under his specialty, and it's one to which he's paying close attention.

"I've been following this with interest and our infectious disease consultant has also been following it. So we've been networking a little bit and paying attention to what's being released," Dr. Nagel said.

The CDC recently released a report breaking down what's known about the illness, but more importantly, what's not known.

The CDC began tracking cases in 2014 and recognized a pattern. There are mainly peaks of cases in even years. Last year, there were 233 cases, and 14 of those were in Ohio. The CDC also found cases were most prevalent during the months between August and October.

As we head toward the end of the year, the CDC is asking medical professionals for cooperation. Keep in mind, there have been 11 reported cases in the United States so far this year, and none in Ohio.

AFM sounds scary, but Dr. Erica Devrees, a ProMedica Pediatrician, said it's important to remember that it is rare. She said that while the CDC has found cases of AFM typically happen within weeks of a child coming down with some sort of virus, AFM is not a virus itself, rather it's a complication.

"Parents should be reassured that you can't catch AFM from another person. AFM is sequela (consequence) of a viral illness; that happens in rare circumstances," Dr. Devrees said.

Unfortunately, Dr. Devrees said there's not much parents can do to prevent AFM. Just stick to the typical measures you'd take to avoid getting sick.

Experts say if your child suddenly begins experiencing weakness, particularly on one side of the body, get them straight to the emergency room.

As far as the prognosis for AFM, Dr. Nagel said patients typically are treated with an IV immune therapy and high-dose steroids.

"It can be life-changing, but depending on where the injury or where the insult is, some of these kids can do very well," Dr. Nagel said.