The founder of Hormel Meats hailed from Toledo 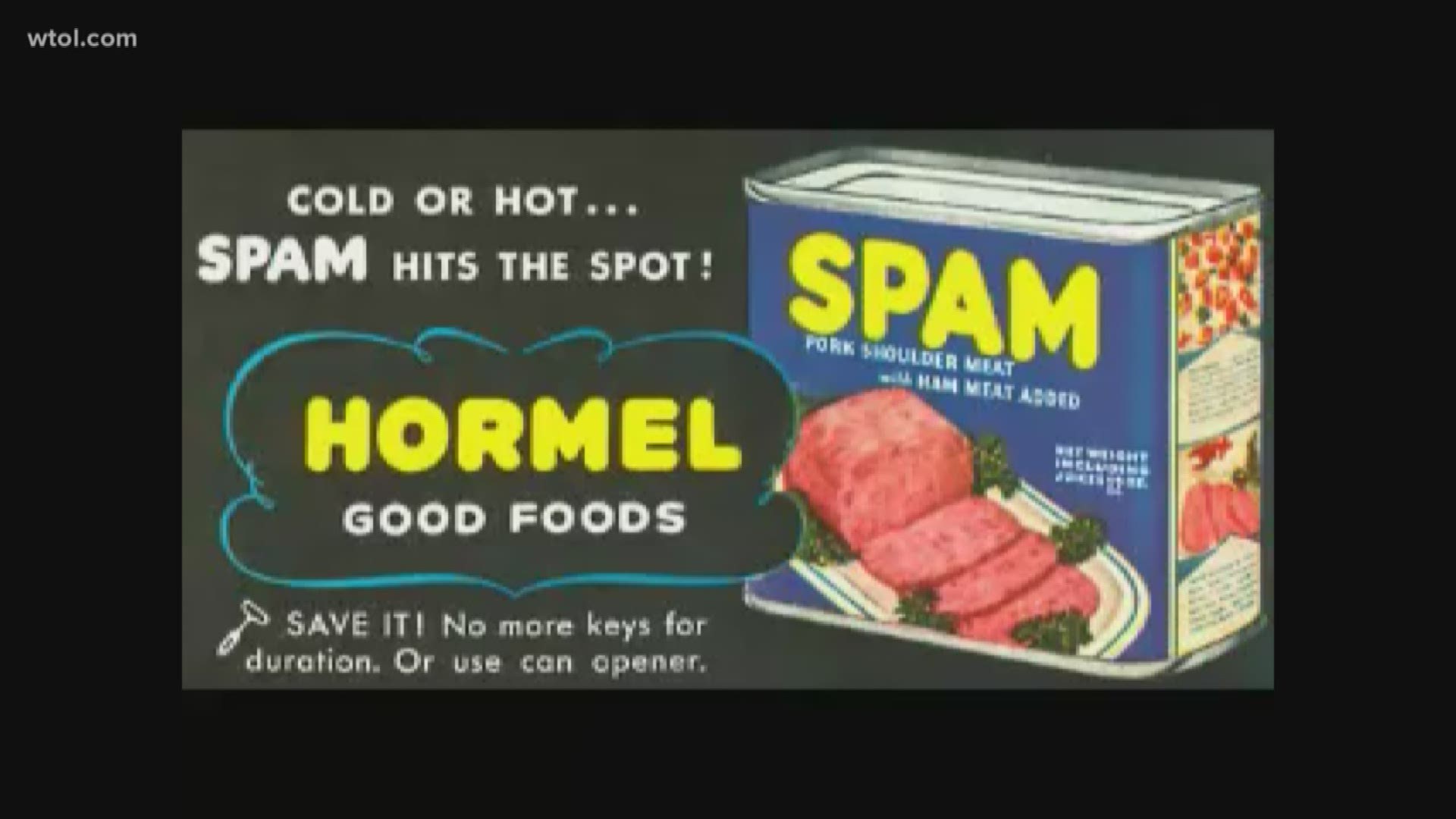 TOLEDO, Ohio — How many of you have ever had SPAM? Not the e-mail kind, but the delectable pork shoulder meat treat that comes in a can.

With billions of cans sold in the past 82 years, it's probable that most everyone has eaten it, or at least tried it at one time or another. However, some folks do say they can't get past the smell.

Despite its critics, it is known and loved worldwide. In Hawaii and Guam, this often ridiculed canned mystery meat is a food staple and regarded with reverence.

It's probably the most well-known product of the Hormel Meat Company which is based in Austin, Minnesota but has its roots in Toledo, sort of.

You see, the grandfather of SPAM, George Hormel, spent much of his young life in our fair city before he found his way to Minnesota in the 1890 and started a butcher shop and then a slaughterhouse and meatpacking company; and the rest is meatpacking history.

But, the early chapter of this rags to riches story starts in Toledo, south Toledo actually, in a house in the 400 block of Langdon where the John Hormel family lived for decades in 1800s.

John Hormel and his family moved from Buffalo, New York to Toledo in the 1860s. There were 12 children in the Hormel family, all living together in the upstairs apartment of the home located just off Broadway. It was John's dream to have his own business, thus he started a tannery on St. Clair Street near the canal. It was a living, but always a struggle to make ends meet. George worked with his father at the tannery, but in 1873, the economy soured and young George at 16, decided to leave Toledo to go to work for an uncle in the meatpacking industry in Chicago. The Hormel family stayed behind in Toledo.

In 1891 George, after a few other jobs, found himself working as a wool salesman but was made an offer to buy a butcher shop for $500 in the small town of Austin, Minnnesota. He made the move and put his life in Toledo behind him.  His meat business was successful and the Hormel Meat Company would grow to become an industry giant. George's fortune would grow substantially and over the ensuing years most of his family in Toledo migrated west to Minnesota to become of part of the empire George had built. The last Hormel family member to leave Toledo was his sister "Nellie" who had been a Toledo teacher and didn't leave Toledo until 1899.

In Austin, George eventually retired and it was his son Jay who had taken over the reigns of the Hormel company. He was an innovator and in 1936 he got an idea to use the mostly unused pork shoulder of the pig to produce "meat in a can."  Mixed with water and salt other ingredients and spices, SPAM was born — a name that was a mash up of spice and ham.

It was cheap and didn't require refrigeration, so it quickly became a popular food in many homes, especially during the lean years of the depression. Later in World War II, it was used by the U.S. Army in both Europe and the Pacific fronts to feed the troops. Russian troops also were given SPAM and it was credited with saving the lives of thousands of starving Russian soldiers.

SPAM continues to be marketed and sold around the world. Today, there's even a SPAM museum in Austin, Minnesota where all thing SPAM are featured. Another tourist attraction there is the stately mansion of George Hormel, the Toledo boy-made-good. It is an elegant edifice and museum open to visitors. It stands in stark contrast the largely forgotten old wood framed Hormel homestead in Toledo, where the current residents were surprised to learned of its historical significance.This modest two-story house in Toledo, now over 150 years old, doesn’t quite reflect the opulence of big meat money of the Hormel home in Minnesota. And in a way, it's maybe the SPAM of Hormel's family history.

But, no matter how you view it, the next time you see a can SPAM, just know that inside that can may be a little bit of Toledo.