Emily Jackson, a cystic fibrosis patient, fought for her life while waiting for a double lung transplant until the last minute. 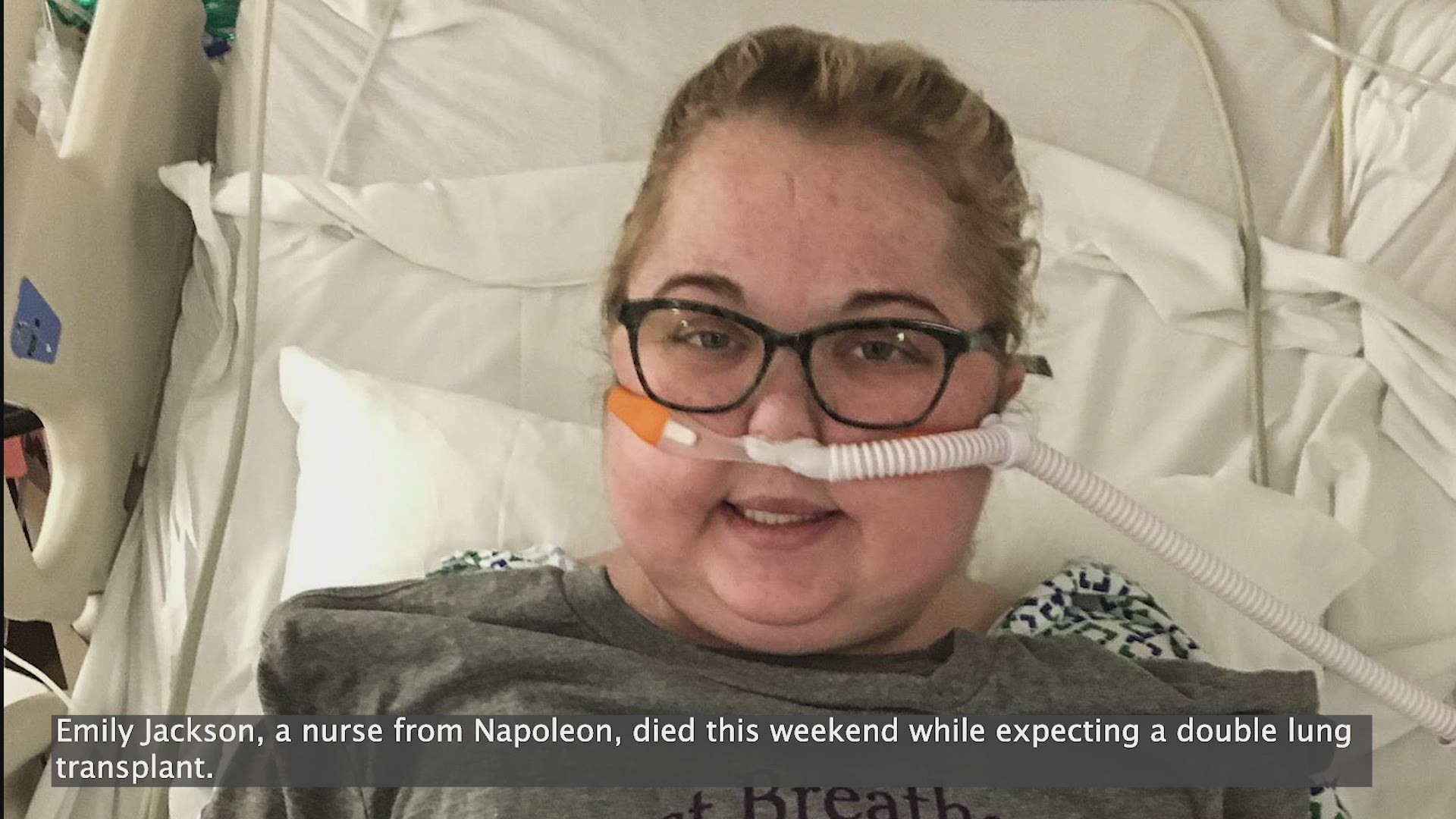 NAPOLEON, Ohio — Emily Jackson, a cystic fibrosis patient, fought for her life while waiting for a double lung transplant at the Cleveland Clinic until the last minute.

She was diagnosed with the incurable disease when she was a few months old and had to live with a strict routine of breathing exercises, medical check-ups and multiple hospital stays throughout her life.

Although many people who live with cystic fibrosis can manage to live normal lives, Jackson's health had been declining since April when she got onto the transplant list.

Late last week, after her lungs deteriorated and she contracted an infection, her body couldn't take it anymore and she passed away Sunday morning.

Sarah Jackson
It is with extremely heavy hearts that we inform all of our family and friends that our beautiful precious Emily passed away this morning at 9:56 a.m and became an angel to be with God in heaven,...

But as everyone who knew Jackson well will testify, she was a fighter and so are her relatives, who now will battle to keep her legacy alive.

The Children's Organ Transplant Association was organizing a benefit in her honor to help raise money to pay for the lungs for which she was waiting.

The event will still go on, and the proceeds will go to help the Jacksons with medical and funeral expenses.

The benefit will feature auctions, raffles, a lottery board, bake sale and more.

Jackson left behind two items that will be available for bidding at the event. One is a plaque that she painted herself that says "Bless our nest" and the other is a basket with children's toys, because she wanted the benefit to offer something for kids as well.

"Towards the end, she (Emily Jackson) loved just being at home and being in her own space. She loved being in that nest surrounded by all of those that loved and cared for her," her mother said. "There are several people that already are hoping to be the highest bidder to receive that on Sunday."

Her dad, Patrick Jackson, added that his daughter was incredibly happy of how the plaque turned out.

"She was so excited that this turned out so good. She was just so proud. She got to feel like she was contributing to the COTA benefit," he said.

Her former roommate and friend, Shawna Boger, 22, said what has always stood out to her about Jackson was her strength.

"She obviously taught me what it meant to live every day and really fight for your life and for what you wanted and what you deserved," she said.

Boger, who also went to nursing school, said she registered as organ donor when she became a nurse and got her license.

"I made that decision when I got my license. I think Emily had a big impact on it. We weren't super close at that age, but it was always in the back of my mind. Like if something happened to me and she needed something, or anybody really needed an organ, why would you take them with you?" Boger said.

Additionally, Boger wasn't the only one to say that Jackson lived a life of caring,  not only for herself but for everyone around her as well.

Her sister, Alyssa Jackson, 16, said Emily always made sure she had everything she needed.

"Even though she was faced with all these struggles, she always made sure that I was taken care of and that I always got the most out of everything, even though the focus was a lot on her," she said. "I was talking to her best friend last night and she told me that when Emily got listed on a transplant list and she was going to be away in Cleveland for awhile ...Emily told her, 'Make sure Alyssa is taken care of.'"

In the end, Jackson wanted to be remembered by her unbridled resilience, her family said.

"She always said 'You can't get rid of me that easily.' And the comfort I can take from this is because she was a fighter. I know that she would not have passed away if there was any fight left in her," her mother said.