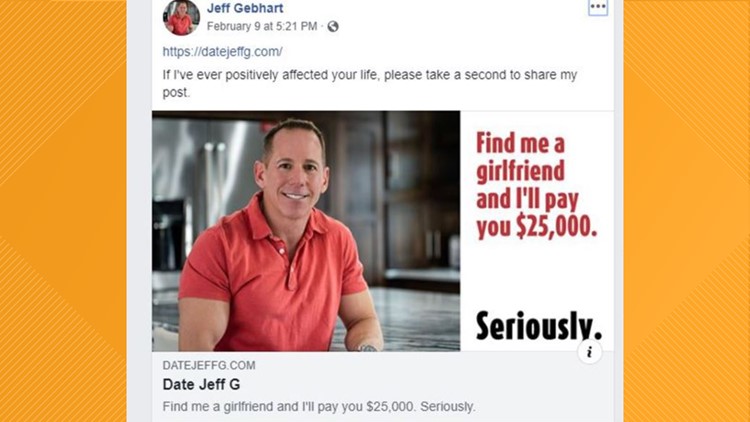 Photo by: Jeff Gebhart Facebook page
Jeff Gebhart wants to pay someone $25,000 if they help him find a girlfriend

Kansas man will pay you $25K to help him find a girlfriend. Seriously.

Let’s face it. Yes, social media gives us access to so many people, but that doesn’t mean it’s any easier to find the perfect person to fall in love with.

So, what should someone do when the odds are not in their favor and they're desperate for a companion?

Well, one Kansas man has decided to think outside the box and offer $25,000 to anyone who can help him find a girlfriend.

Bachelor Jeff Gebhart told CBS affiliate KCTV that he is tired of dating the traditional way and despises online dating.

"Well think about it, if you're in a happy marriage, what monetary value could you ever place on meeting the right person ... ever?" the 47-year-old told the outlet. "My time and frustration and disappointment definitely is worth some sort of dollar figure but that was roughly what I'd spend in dating."

Gebhart has been planning this for several months now. The entrepreneur has gone as far as creating a dating website to show everyone he’s serious.

And just in case you think he’s fibbing, the top of his website reads, “Find me a girlfriend and I’ll pay you $25,000*. Seriously.”

The site has everything you need to know about Gebhart, including a two-minute-long video detailing what he’s looking for, his hobbies and even reviews from his friends and family.

For those wanting to help Gebhart find love and score the $25,000 payday, know there are rules:

While it may be an unconventional way to find love, Gebhart hopes it will be just the thing to help him find his sweetheart.