James Holzhauer claims to have absorbed a lot of knowledge quickly by reading children’s books. 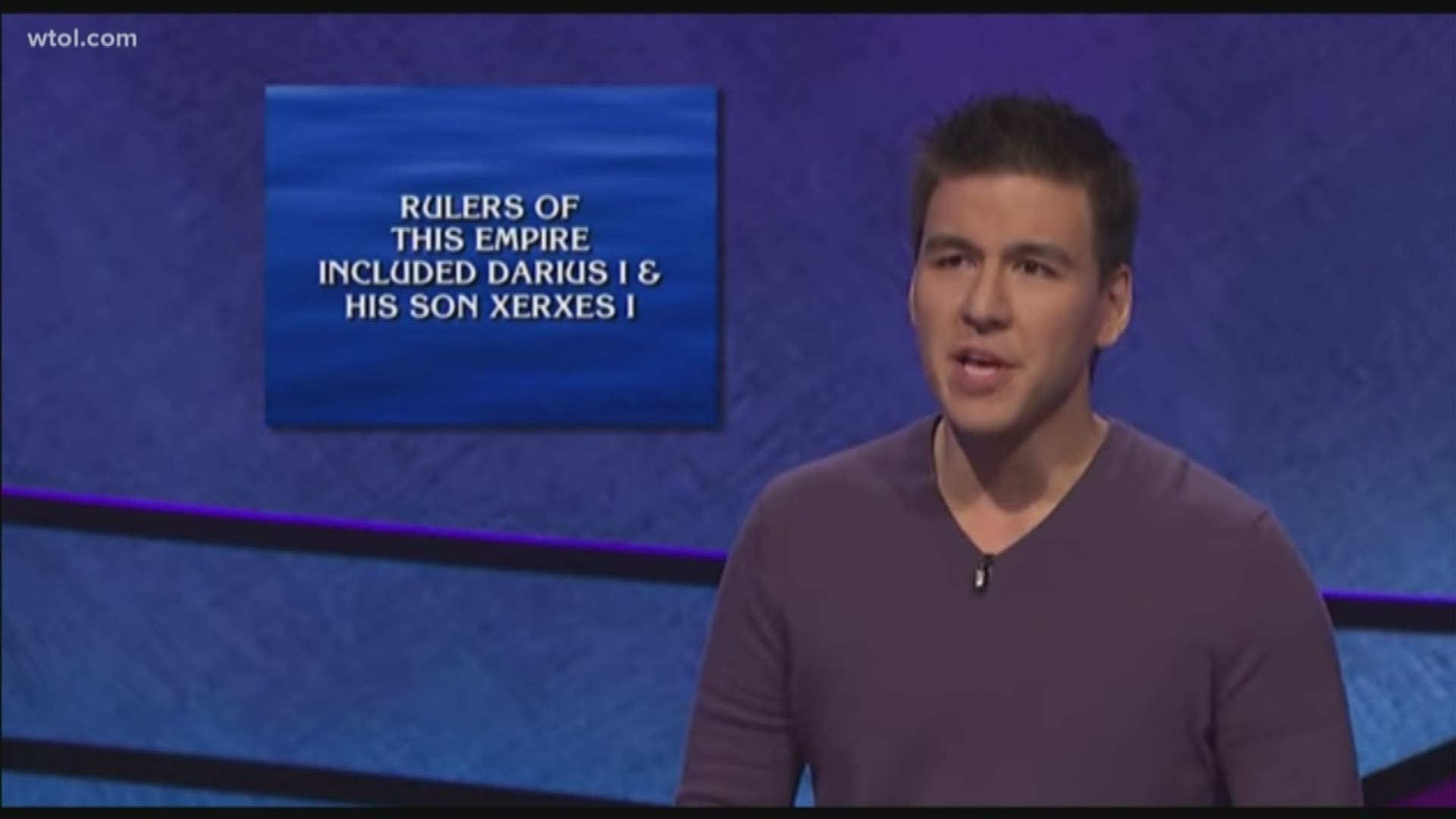 TOLEDO, Ohio — Have you been staying on Channel 11 after the news to watch Jeopardy!?

If not, you may want to start.

A Jeopardy! contestant is wowing minds across the country. Some have likened it to watching a tightrope walker.

This player is on an unprecedented winning streak, breaking records on this same channel night after night.

He is also beating the record for the most money ever won in a single game, skyrocketing him to win $1,528,012 in now just 20 days.

But who is he?

To answer in the form of a question, “Who is, 34-year-old professional gambler James Holzhauer?”

Here’s some insight on how he's making it look so easy.

Everyone that gets to compete on Jeopardy! is smart, having to go through a tough test and vetting process, but this contestant makes it look effortless.

So, how hard is it, really?

Just this year, a local contestant kept us on the edge of our seats.

University of Toledo alum John Presloid had five appearances and four wins on Jeopardy in January with a Jeopardy! winnings total of $92,200.

He is now a research assistant in the Department of Medical Microbiology and Immunology at the University of Toledo's College of Medicine and Life Sciences, and weighs in on Holzhauer's performance.

"I can speak from experience," Presloid said. "I know, when I was on, they actually made YouTube videos and clips of, ‘Oh, John bets so big,’ and I was betting $10,000 on a Daily Double. When you actually get up there and you hit that Daily Double and you have a big chunk of money, it's really hard, you know, you want to hold on to it. You just have to have such nerves of steel. You know, you don't want to risk that much, and I think it just goes against a lot of peoples' nature to really go big and go really hard and be really aggressive with it, so I think it just takes a really rare combination of the knowledge, the speed, and the nerve to just really go for the kill."

The secret to Holzhauer's success?

In an interview with The Washington Post, Holzhauer claims to have absorbed a lot of knowledge quickly by reading children’s books.

He said, "They are chock-full of infographics, pictures and all kinds of stuff to keep the reader engaged," said Holzhauer. He also said he "couldn't make it through a chapter of an actual Dickens novel without falling asleep."

WTOL looked into this claim with local children’s literature specialist Nancy Eames, who is a Youth Services Coordinator with the Toledo Lucas County Public Library system.

"I think reading children’s books are such a great way to learn things, and the thing to know about children’s books is that they have been really researched, and vetted, and checked by editors, so the content that you get in a children’s book is going to be good," Eames said. "It's high quality information, so I would recommend anything you want to learn, you can learn from a children's book. Now, if you need to learn it in depth, or you're taking a college class, of course, read the adult section books as well."

Eames said she herself uses this trick quite often when she is planning to travel - reading a book on the location where she’s headed for a quick history lesson.

Being smart and daring can really pay off.

“It’s hard to see him losing anytime soon, but that’s what they say about everybody until they lose," Presloid said. "He came close the other night where the other contestant was really keeping pace with him and kind of using his own strategy of going for the big money and then betting really hard when he hit the Daily Doubles, so I think it’s really going to take someone that’s really smart and also gets a little lucky in getting those Daily Doubles. Maybe he misses one, maybe he misses the Final Jeopardy - he’s been doing really well at that too - but he can really have a shot at Ken Jennings’ record I think. It’s really hard to see him losing anytime soon."

Ken Jennings is the player who etched his name in Jeopardy! history in 2004 when he broke the record of longest win streak on the show: 74 wins.

With Wednesday's win, Holzhauer ties Julia Collins for the second-most wins by a single contestant in Jeopardy! history.

That keeps him in strong contention to work his way toward Jennings' win streak.

Presloid has a few words of consolation for those folks that end up matching up against Holzhauer.

“You made the show! It’s fun just to be there and meet the people. I thought I was going to lose my first game. Sometimes it’s just bad luck and you just run up against a juggernaut. I think everyone’s really shown well, no one’s really looked like an idiot, they’re answering the questions and getting good scores. You’ve just got to do your best and it is what it is," said Presloid.

Tune in to Jeopardy! weeknights, on WTOL 11 at 7:30 following the nightly news and Wheel of Fortune.