27 questions about 'It: Chapter Two'

The sequel to the hit 2017 horror film is in theaters now. Here's everything you need to know. 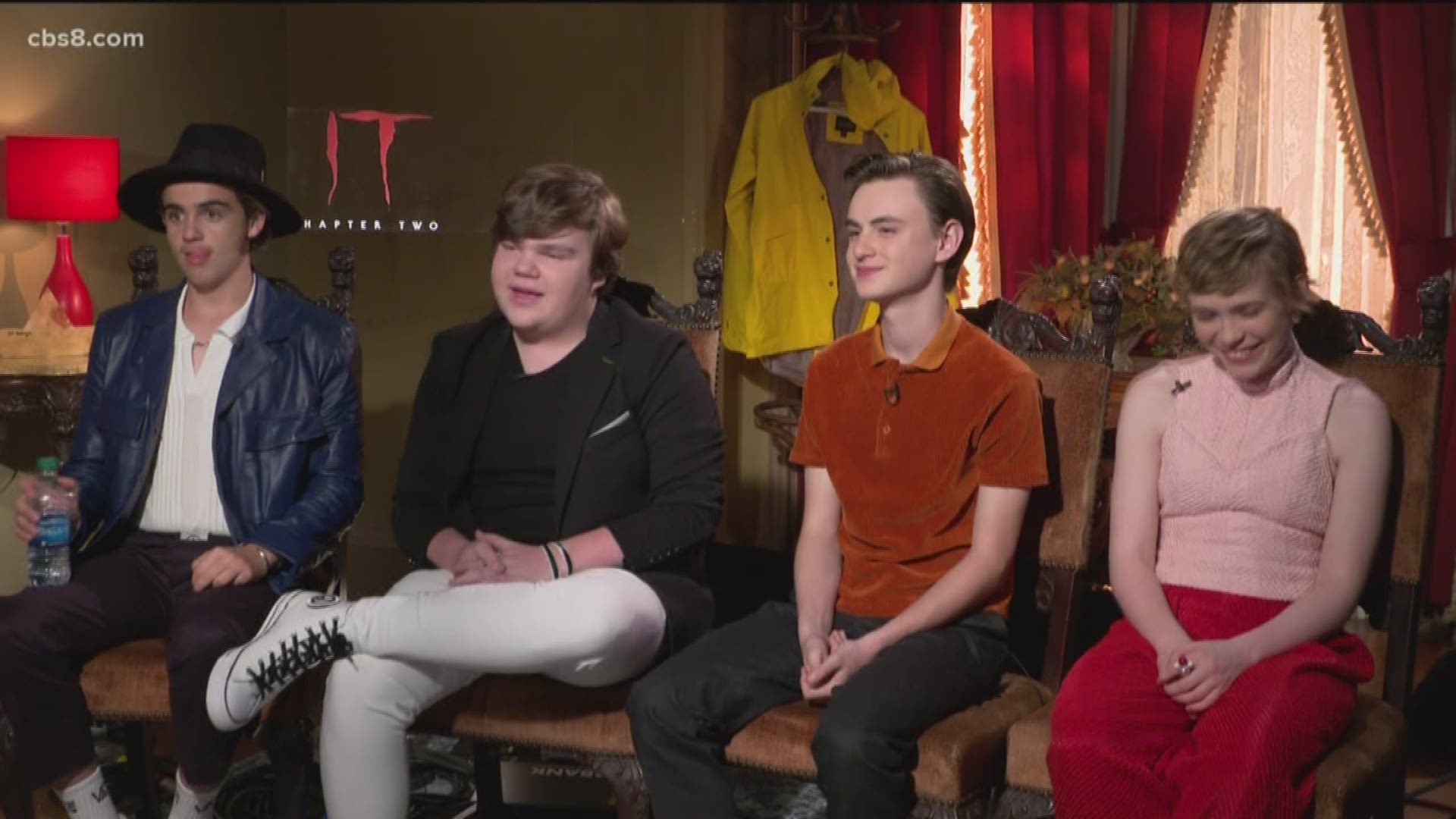 "It: Chapter Two," the sequel to 2017's "It," arrived in theaters nationwide Friday. The movie is an adaptation of Stephen King's 1986 book about a group of friends who must defeat an evil circus clown who terrorizes a small Maine town every 27 years.

In keeping with the "27 years" theme, here's a review of the movie told in 27 questions.

In 2016, seven former childhood friends who dubbed themselves The Losers Club (Bill, Eddie, Stan, Beverly, Ben, Mike and Richie) who killed an ancient evil when they were kids must reunite in their small Maine hometown to kill that same evil, which takes the form of a demented clown named Pennywise, when it returns 27 years later. They come home, and stuff gets real weird, real quick.

The book was all about institutional evil and institutional racism and cyclical oppression and abuse and how those who forget the evils of the past are doomed to repeat them, as well as being a look at nostalgia and growing up while dealing with the frights (both real and imagined) of childhood. The new film adaptations jettisoned the whole "institutional evil" concept to serve up a bunch of scary set pieces. "Chapter One" is a fantastic coming-of-age story, but "Chapter Two" is more about the power of belief and the value of nostalgia.

"Chapter One" was set in 1989. "Chapter Two" is set in 2016. This is an update from the book and miniseries, which were set in 1958 and 1989, respectively. Both take place in the fictional town of Derry, Maine, which King based off of Bangor, Maine.

If clowns scare you, then yeah, it's pretty scary. I was left more grossed-out by the set-piece frights than outright scared. (There's a lot of puke in this movie.)

What really got me was the Bury Your Gays trope at the cold open of the film, where a gay couple is assaulted and beaten nearly to death at the Derry Carnival and nobody does anything to help. Later in the film, the incident is mentioned once and then forgotten.

In the book, this scene is used to illustrate how Derry has always been evil and Pennywise feeds off of that evil; in the film, it comes off as unnecessarily cruel for such a minor scene.

5. Speaking of Pennywise, how much time does he get in the film?

About the same as in "Chapter One." And Bill Skarsgård is making the most of this role, let me tell you. It's a great performance.

6. Why is Pennywise a clown?

Stephen King has said that he chose to make the embodiment of evil into a clown because kids love clowns, and making something they love into something they would fear was a good idea for a horror book. Now everybody hates clowns.

7. Are there a lot of jump scares?

If you've seen "Chapter One," then you'll recognize the pattern of "kids banter>one kid gets scared>Pennywise appears>Pennywise runs at the camera and laughs>repeat" that is used here a lot. That formula is used so much that you can prepare yourself for each scare, which may be the point, as the film is about dispelling fear.

There's a scene from the trailer where Beverly (Jessica Chastain) returns to her childhood home to find that a creepy old lady lives there who isn't all that she seems. It was just as I remembered it from the book.

Pretty much at any point after the one-hour mark and before the final battle scene.

Honestly, no. King's book is 1,138 pages. The first installment of this series tackled half the book in 135 minutes, and the 1990 TV miniseries that adapted the whole book is 192 minutes long. It's possible to do a version of this film that's more streamlined, but "It: Chapter Two" takes most of the character beats from the book and adds in more unnecessary bits to create a bloated-feeling film that all but the most diehard King fans will find repetitive. I didn't mind the long running time, but I also wanted to watch three more hours of "Once Upon a Time in Hollywood," so take that for what you will.

12. What should have been cut?

The entire plotline with childhood bully Henry Bowers (Nicholas Hamilton as a kid, Teach Grant as an adult) goes nowhere and makes no sense unless you've read the book.

"Chapter One" works more for me as a whole because while it was the first chapter, it told a complete story and captured the coming-of-age aspect that King does so well. "Chapter Two" relies so much on "Chapter One" that it can't stand on its own, but if you view it as a sequel, it's a well-done sequel.

14. So do I need to see the first one before I see this one?

15. Are the kids from the first one in this movie?

Yes, and those are some of the best parts of the movie. I think the producers realized this, because they shot more scenes for this movie with the same kids from the first movie, and then went to the trouble to digitally de-age those kids so there would be more continuity. But the scenes are fun!

RELATED: Commentary: 'The Office' is leaving Netflix. Here's why you should just go buy the DVDs.

16. The first one was pretty funny. Is “Chapter Two” funny?

Bill Hader plays the grown-up Richie Tozier, played as a child by Finn Wolfhard (Mike from "Stranger Things"). Most of the funny lines come from him, and he gets in a lot of dialogue. Eddie (James Ransone as an adult, Jack Dylan Grazer as a kid) gets in some good one-liners as well.

More or less. "Chapter One" made some minor changes in terms of characterization and plot points, and "Chapter Two" does the same. The biggest differences are the aforementioned focus on scares instead of institutional evil and how weird the ending is. The ending of "Chapter Two" is plenty weird, but the book's ending is bonkers.

18. What was the weirdest part of the movie?

There is a music cue about 3/4 into the movie that seems very out of place.

19. Does this film use as many practical effects as the first one?

One of the big talking points about "Chapter One" was that whenever possible, director Andy Muschietti used practical (non-CGI) effects. Here, it looked like a solid 75/25 split between CGI/practical effects.

20. Who gives the best performance?

Honestly, give Hader his Oscar nomination now. He's the best part of an excellent adult cast.

22. Does Stephen King make an appearance?

23. How much money is this supposed to make?

"Chapter Two" has made $10.5 million from preview showings alone and is forecast to make anywhere from $85-$90 million in its opening weekend. [Editor's note: As of Sunday at 3:30 p.m., opening weekend estimates put it at $91 million.]

"Chapter One" is the highest-selling debut for an R-rated horror film ever.

"It: Chapter Two" is rated R for "disturbing violent content and bloody images throughout, pervasive language, and some crude sexual material." Leave the kids at home. Unless they've seen the first one, then, by all means, bring them along to this one.

25. Will the two films ever become one film?

There's been talk of Muschietti combining the director's cuts of Chapter One and Chapter Two into one huge 7-hour director's cut. No official word on that yet, though.

26. Will there be another adaptation of "It"?

"It" would make for a great streaming service show, I think, if given to the right creative team. But at the rate we're moving, we'll probably get another film adaptation in 2044.

"It: Chapter Two" is muddled and repetitive and gets lost in its own mythology and is about an hour too long, but it boasts one of the greatest performances you'll see all year from Hader. It's also one of the better King adaptations, especially for a tome that's hard to adapt. However, unless you're a diehard King fan, you might want to skip this one.